Mulago School of Nursing and Midwifery graduates pose for photo during the 10th Graduation ceremony at their school in Mulago recently. ( Photo by Sylvia Katushabe)

Mulago School of Nursing and Midwifery has embraced patriotism training for all their students to help improve on their soft skills, especially their attitudes when working.

"It is a special training which inculcates the culture, the discipline such that from the goal one, they are able to have the spirit of their nation and serving beyond self and as they go for the training, they embrace it," Nampiima stated.

This was in response to a skit that was acted by a group of students from the Patriotism and Writers' club who condemned the acts of bribery by senior nurses and the poor communication that they exhibited with their patients.

Nampiima said she had heard complaints from the public about the poor attitudes that the nurses and midwives were exhibiting towards their patients in the working environment.

This training was introduced as a means to help improve on the nurse's and midwives' soft skills which include positive attitudes towards patients, good communication skills and uplifting their work ethics.

Nampiima made these statements during the 10th graduation ceremony that was flagging off a total of 268 grandaunts with diplomas in nursing and midwifery recently at their school in Mulago.

Beatrice Amuge, who represented the Executive Director of Mulago National Referral Hospital highly condemned the acts of nurses and midwives asking for bribes from patients.

"There is no hospital, which wants this, there is no manager of the hospital who wants this, not even a bribe, but I also want to say it is possible they are there but we totally discourage it, we totally don't want it and it should not be happening," Amuge expounded. 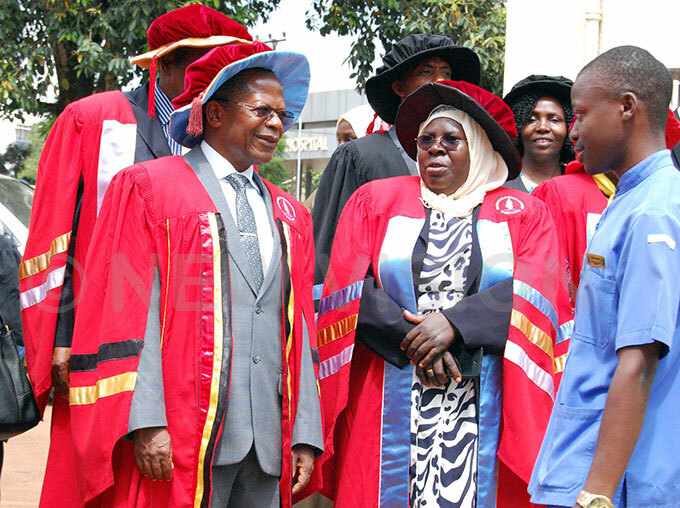 John C Muyingo (left) State minister for higher Education and Safina Musseene commissioner BTVET listening to the student, on his arrival at the Mulago School of Nursing and Midwifery 10th Graduation ceremony.

Amuge reminded the grandaunts to make sure that they have a conscience, and uplift their ethics which is to love and to serve.

She also said they only need at least 80% of the nurses and midwives to have that positive attitude and the rest would follow.

"If we can get over 80% of people who can say this is wrong. We believe others who do not know will definitely change," Amuge emphasized.

The nurses also decried the inadequate resources that they had to work with and asked the state minister to act upon them. These included inadequate tutors and finances to facilitate their staff.

Nampiima told the minster that only 12 out of their 66 staff members were on the government pay-roll out of the 12, only five are teaching staff. She urged the minister to recruit more staff because the money which could be used for development is diverted to the salaries of the staff.

"If it is the school paying, then it means the school cannot develop. Those funds that we would have used for development purposes go to salaries that's why we are requesting the ministry or government to intervene to go for the recruitment processes and appoint more tutors," Nampiima said.

The state minister for higher education John Chrysostom Muyingo, who was the guest of honor, however, said the ministry had a total sum of sh300m to support the renovation of St Elizabeth hostel and that the school would receive three tutors before the end of the month.

He also advised the administrators to note down all their challenges so that they can be discussed and resolved before his next visit.

UPC implores its members to participate in special interest group

UPC implores its members to participate in special interest...