Immunisation to rid Uganda of Measles-Rubella by 2030

Measles also known as rubeola is a viral infection that is serious for children. The disease spreads through the air by respiratory droplets produced from coughing or sneezing, according to WHO.

Measles also known as rubeola is a viral infection that is serious for children. The disease spreads through the air by respiratory droplets produced from coughing or sneezing, according to WHO. 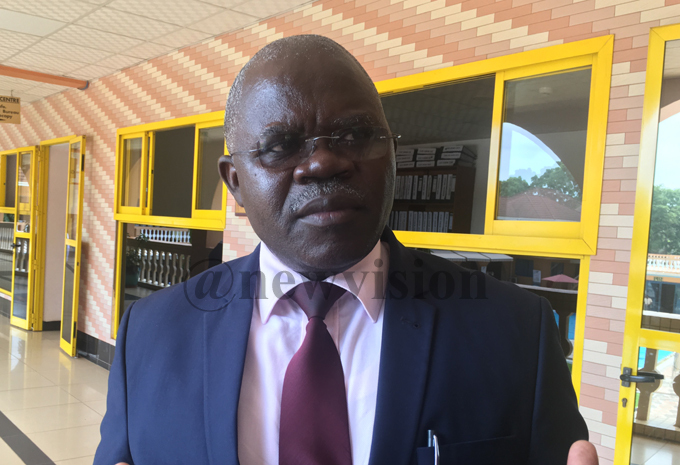 There were 13 outbreaks of measles this year alone reported in the United States of America, which affected at least 704 people.
In neighbouring DR Congo, there have been over 165,000 suspected cases of measles reported, with over 3,200 deaths since the start of 2019.
Madagascar, Mozambique has seen big measles outbreaks. Elimination of measles and rubella has continued to elude countries across the world," Dr. Driwale says.
In Uganda, over the last three years, 56,000 cases of suspected measles were reported by 108 out of the 134 districts. But investigations by the Ministry of Health found the some suspected measles cases, were rubella.
Rubella and its deadly effect
Rubella is a disease we have largely lived with, but Uganda's focus is now on its elimination together with measles, two diseases that are closely related, Driwale explains.
"You can only distinguish the two clinically by examining the blood sample of the affected persons. In Uganda, we are dealing with cases of rubella and measles occurring at the same time," Dr. Driwale says.
They both have similar symptoms though effects in rubella seem mild; it is deadliest when it affects a pregnant woman.
"We worry most about rubella because of the unborn child. There is a 95% chance of a pregnant woman with rubella transmitting the virus to their unborn child," Dr. Driwale says.
The World Health Organisation (WHO) states that rubella infection in pregnant women may have serious consequences causing miscarriages, stillbirths or severe birth defects known as congenital rubella syndrome (CRS). 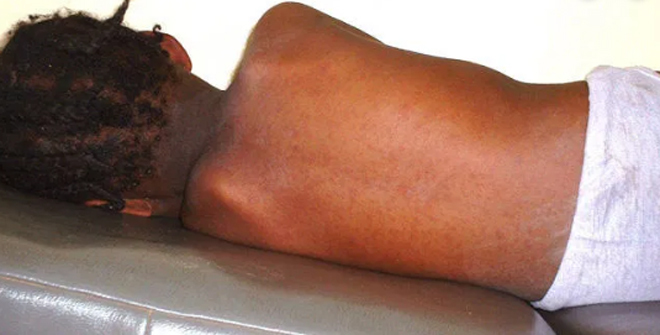 A child with rubella. Courtesy photo

Children with CRS can suffer several lifelong disabilities including hearing impairments (go deaf), learning difficulty, cataracts (go blind), developmental delay (born with a small head too) and heart defects.
Dr. Driwale says the Uganda Heart Institute identified rubella as a major cause of heart defects in most children brought to their care.
Introducing the Measles-Rubella vaccine
Uganda embarked on a national immunisation campaign on October 16, 2019, following its launch a day before on October 15, 2019, in Mayuge district, east of the country.
The Measles-Rubella vaccine was introduced in the routine immunisation program replacing the single dose measles vaccine.
Dr. Driwale disclosed Busoga, Buganda, Lango, Bugisu, and Kampala regions lag behind compared to other areas of Uganda when it comes to immunisation.
These areas are prone to outbreaks but the diseases are preventable with adherence to immunization. He also said superstitions around immunization are unfounded. "A deformed child should be of more concern than vaccine safety," Dr. Driwale said.
"We have an agency that ensures that the vaccines we choose to use are safe. The vaccines are not even new, they have been used elsewhere. We are racing behind other countries, to eliminate measles and rubella" he further explains.
Dr. Driwale says for children who may react with body rush when immunized; it is only a sign that the body is making use of the vaccine and the rush is bound to disappear.
The Minister of Health Dr. Ruth Aceng told journalists in Kampala that the same vaccines have been used in the USA, UK, India, even China.
Ensuring all children are immunised
One Sunday Samuel tweeted: "In this country today, we are being herded. We no longer ask questions, we just follow what a small group has decided." This was in response to the start of the national immunization campaign."
Winston Kigozi Kagombe also tweets: "Sometimes you wonder whether these vaccines are safe and don't have long term effects, secondly worries when you remember that we got fake hepatitis B shots."
One Andrew I.Kazibwe tweets: "One of the reasons why some people out there are still hesitant, and against immunisation is due to the fact that there have been cases about 'immunisation gone wrong' with kids being affected. What assurance has the government established to strength society into restoring trust?"
But Twaahah Kagga also in a tweet says: "Vaccination and hence immune boosting is the best way to fight viruses and other rapid immune compromisers."
In Uganda immunisation is mandatory. Under the Immunization Act, the responsibility to have a child immunized is with parents, caretakers and school teachers, Driwale explains
The immunisation act gives parents the duty to take their children between 0-5 years for immunization. But when it comes to national campaigns, immunization is compulsory it becomes criminal to shun the exercise based on one's beliefs.
Dr. Driwale says while schools have to inform parents about national immunization campaigns when planned, and also explain its benefits; they do not need the consent of parents to carry out the exercise.
Headteachers also have to take responsibility for the immunization status of a child at admission.
A child should not be admitted to school if they are not immunised because they pose a threat to the health of other children.
Driwale explains that if measles, rubella immunisation stagnated at 80% and 20% of the children are not vaccinated against the diseases every year, there are implications.
A large number of unimmunised children means there is no benefit for immunisation. If there is an outbreak so many other children get sick.
"We targeted children 0-15 years for immunization against measles and rubella, 96% of cases of the diseases are concentrated in this age group. They are most prone,"Driwale reveals.
The target in the national immunization campaign was to reach 100% immunisation coverage for children against measles and rubella.
Driwale says the campaign targeted schools because children are easy to reach in school settings since they are all in one place.
At least 80% of Ugandan children were to be immunized in school in the first three days of the immunization exercise.
The remaining 20% out of school had to be covered in two days at the 20,000 immunisation posts that were set up across the country.
At the same time, a booster doze of oral polio vaccine was given to all children younger than five years.  At the end of the three days, 7.5 children had been immunized, according to the ministry of health.
But the five-day nationwide immunisation campaign had to be extended for a day in Kampala, Wakiso, and Mukono to cover schools that were not reached.
The nationwide immunization campaign concludes today in the Karamoja region that had a two days extension following heavy rains and floods that disrupted the immunization campaign.
"In carrying out mass vaccination, we are gatekeeping, boosting the immunity of our community to resist contagious diseases.  Even in other countries, mass immunization is mandatory to control over disease," Driwale says.
Benefits of Measles-Rubella immunisation
Three years from now we expect measles and rubella not to be a problem in case the 15 years old just immunised decide to have children, the children born will not have to worry about these diseases, Dr. Driwale says.
He says the nationwide immunization campaign just conducted, gives Uganda an opportunity to create a country were measles, rubella is eliminated.
"The elimination agenda remains. The new target is to have measles and rubella eliminated 2030. We have started making efforts, with this nationwide immunization campaign," he said.
Dr. Driwale says even when the rest of the world is failing "we have the possibility of achieving this target with the nationwide immunisation effort undertaken.
With this nationwide immunisation campaign, we have also strengthened our immunization system; we now have better cold chains and better capacity to handle immunization drives nationwide," he said.
A total sh.72 billion from Government, WHO, The Global Alliance for Vaccines and Immunizations (GAVI) and the United Nations Children's Fund (UNICEF) was used for the national immunization campaign against measles-rubella and polio in Uganda.