One of the Royal Blues (dfcu bank) competes in the sack race during the Bankers Sports Gala at Namboole. PHOTOS: Michael Nsubuga

Top ten
Royal Blues 220pts
Cente 184
Auto Bank 157
Professionals 150.5
Pillar 144
Achievers 109.5
Here for Good 100
UBA Lions 91.5
FINCA Crew 91
Team Brac 82
The Royal Blues amassed 220 points to win the 20th edition of the Uganda Institute of Banking and Financial Services 20th annual banker's sports gala that ended at Namboole on Sunday.
The men and women from dfcu bank were in top form winning gold in athletics where they picked a massive 120 points before adding 20 for their second-place finish in Darts and 30 points for their third-place finishes in netball and basketball. 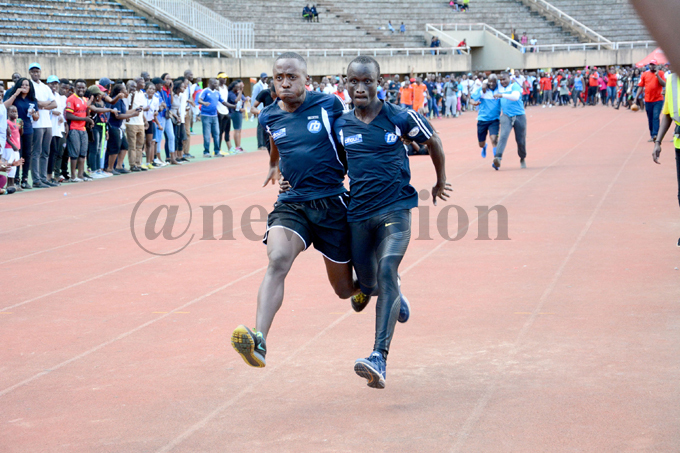 They also collected a combined 37.5 points from Chess, badminton, pool, table tennis and volleyball to emerge champions leading to wild celebrations. Pandemonium broke out they picked award after award from the different categories as their name was constantly read out during the awards ceremony, graced by the Deputy Governor of the Bank of Uganda, Louis Kasekende and Wilbrod Owor, the executive director of Uganda Bankers Association.
Cente (Centenary bank) came second overall having picked silver in athletics, silver in table tennis and volleyball, and bronze in chess and football that was won by the Professionals (Tropical Africa Bank).
Cente picked a combined 75 points from badminton, chess, darts, netball, pool, table tennis and volleyball to pick silver-overall while AutoBank (Stanbic) took bronze having collected 65 points from the same games that were played at Lugogo and Namboole.
AutoBank won gold in netball, silver in badminton, tug-of-war and basketball to finish third overall on 157 points.
Football won by the Professionals attracted the most interest while the tug-of-war, two-legged, bottle-balancing and sack races also excited the bankers and their families that turned up for the games. Kasekende paid gratitude to the 32 teams that took part and thanked them for their very active participation and advised them to always ensure teamwork and set targets.
"Some of you, who are not winning anything this time, please go back, prepare yourselves and come back next year with a new target to win. As Bank of Uganda, we shall continue supporting these games and participating with a target of winning them," Kasekende stated.
Mathias Katamba, Chairman Board of Directors of the Uganda Institute of Banking said the number of participants was increasing by the year.
"The games remind us that we should keep fit even after so that we keep healthier and better. In the coming years we will try to have our colleagues from the East African region participate and we hope this will come to pass," Katamba said.