They both returned 142 gross over 36 holes to walk away with a 50-inch flat-screen and the biggest share of sh12m.

They both returned 142 gross over 36 holes to walk away with a 50-inch flat-screen and the biggest share of sh12m.

National team captain Joseph Cwinya-ai and professional golfer Herman Mutaawe were the toast of Masindi on Saturday after they won the amateur and professional's competitions during the 23rd edition of the Kinyara Open at Kinyara Golf Club.
They both returned 142 gross over 36 holes to walk away with a 50-inch flat-screen and the biggest share of sh12m, in the tournament that attracted a record 175 players from nine golf courses across the country.
It was the first win for both golfers this year, Cwinya-ai having narrowly lost the same championship last year to Grace Kasango, on count-back.
"My game worked out because I prepared well and finished with level par. I played three-under on the first day, scoring five birdies and 2 bogeys but felt a little bit of pressure on the second day, but I held on to win despite playing on three birdies and six bogeys on the second day," Mutaawe said.
"It was only Kamulindwa who really provided the biggest challenge, but I have the experience and was determined," Mutaawe said.
Unlike in the professionals, it was smooth sailing for Cwinya-ai who returned level -par 142 gross over the two rounds. 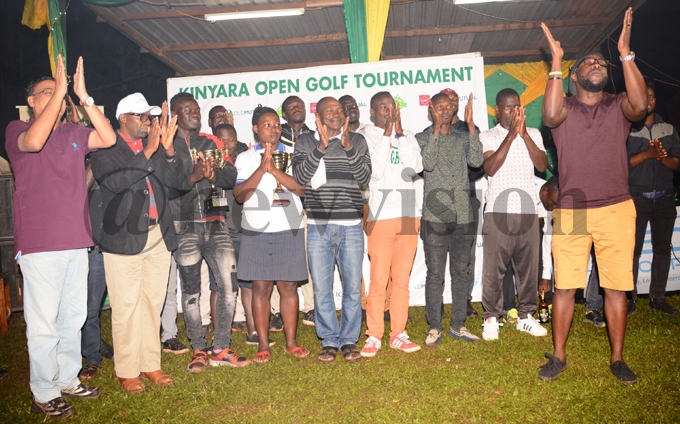 "It was an easy win for me because I'm just fresh from national duty in Mauritius, so I still had my form on and I was playing against my juniors, so it wasn't much of a fight," Cwinya-ai reasoned.
"I actually feel like a pro because I have everything I need thanks to my sponsor Isaac Aisu who is based in the UK, he has provided me with everything I need," Cwinya-ai who 16 pars, one birdie, and one bogey
And 3 birdies, 14 pars on the first second nines respectively, stated.
He will now head to Nairobi, Kenya for the amateur stroke play championship at Thika Greens with extra motivation.
"They gave us a big challenge during the Uganda Open, so I'm going there on a revenge mission,"
Melon Kyomugisha topped the ladies category and took the longest drive prize as well while Martha Babirye and Assa Nambogwe were first and second runners up respectively.
The tournament is sponsored by UAP Old Mutual, LIAISON, ICEA and Jubilee Insurance.
The prize-giving ceremony was graced by top Kinyara Sugar Management including the General Manager Ravi Ramalingam, club chairman Sreekkanth Sarangoraja, financial controller Vishnu Nayaran and LIAISON managing director Tom Mulwa.
Top three
Amateurs
Joseph Cwinya-ai 71; 71 142
Rodell Gaita 73; 73 146
Emma Moko 77; 73 150
Ladies
Melon Kyomugisha 37pts
Martha Babirye 36
Assa Nambogwe 31
Professionals
Herman Mutaawe 68; 74 142
David Kamulindwa 71; 72 143
Martin Ochaya 73; 70 143
Group A-men
Jimmy Mwesigye 36ptsc/b
Collins Bulafu 36c/b
Moses Toko 36
Group B
Nelson Obo 39pts
Peter Mubiru 39
Isaiah Kwizera 39
Group C
Ronald Bwambale 44
Robert Ssempebwa 36
Michael Kayanja 34
Group A-ladies
Melon Kyomugisha 37pts
Martha Babirye 36
Assa Nambogwe 31
Group B
Patricia Nakuya 36
Beatrice Kyomukama 35
Lukiya Tiko 35
Nearest to the pin
Martha Babirye
Joseph Ngobi
Longest drive
Melon Kyomugisha
Joseph Kakooza

You could be the reason she cannot get pregnant

Men: Beware frequent visits to the sauna may render you infertile

No children? It could be your sperms