Niger floods force 23,000 from their homes
Next Story

A spokesman for the National Transitional Council (NTC) in Benghazi, Jalal al-Galal, said a doctor who examined the fallen strongman in Misrata found he had been shot in the head and abdomen.

A spokesman for the National Transitional Council (NTC) in Benghazi, Jalal al-Galal, said a doctor who examined the fallen strongman in Misrata found he had been shot in the head and abdomen.

LIBYA - On October 20, 2011 Muammar Gaddafi was killed by Libyans he once scorned as "rats", succumbing to wounds, some seemingly inflicted after his capture by fighters who overran his last redoubt on Thursday in his hometown of Sirte.
Two months after Western-backed rebels ended 42 years of eccentric, often bloody, one-man rule by capturing the capital Tripoli, his death and the fall of the final bastion ended a nervous hiatus for the new interim government, which is now set to declare formal "liberation" with a timetable for elections.
The killing or capture of senior aides, including possibly two sons, as an armoured convoy braved NATO airstrikes in a desperate bid to break out of Sirte, may ease fears of diehards regrouping elsewhere - though cellphone video apparently of Gaddafi alive and being beaten may inflame his sympathisers.
A Libyan official said Gaddafi, 69, was killed in custody.
"We confirm that all the evils, plus Gaddafi, have vanished from this beloved country," interim Prime Minister Mahmoud Jibril said in Tripoli as the body was delivered, a prize of war, to Misrata, the city whose siege and suffering at the hands of Gaddafi's forces made it a symbol of the rebel cause.
"It's time to start a new Libya, a united Libya," Jibril added. "One people, one future." A formal declaration of liberation, that will set the clock ticking on a timeline to elections, would be made by Friday, he said.
French President Nicolas Sarkozy, who spearheaded a Franco-British move in NATO to back the revolt against Gaddafi hailed a turn of events that few had expected so soon, since there had been little evidence that Gaddafi himself was in Sirte.
But he also alluded to fears that, without the glue of hatred for Gaddafi, the new Libya could descend, like Saddam Hussein's Iraq, into bloody factionalism: "The liberation of Sirte must signal ... the start of a process ... to establish a democratic system in which all groups in the country have their place and where fundamental freedoms are guaranteed," he said. 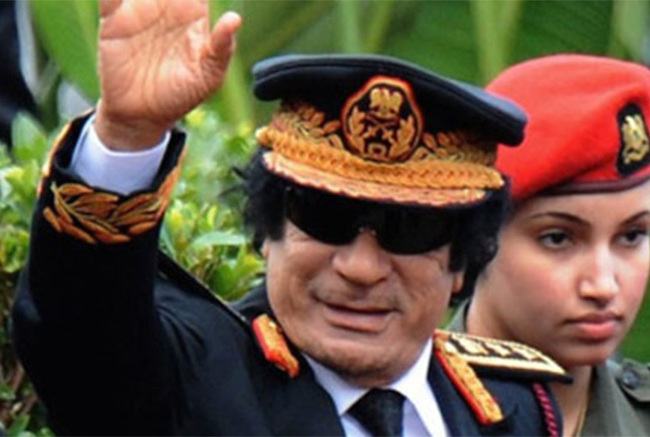 A spokesman for the National Transitional Council (NTC) in Benghazi, Jalal al-Galal, said a doctor who examined the fallen strongman in Misrata found he had been shot in the head and abdomen. Jerky video shown on Al Jazeera showed a man looking like Gaddafi, with distinctive long, curly hair, blooded and staggering under blows from armed men, apparently NTC fighters.
"They captured him alive and while he was being taken away, they beat him and then they killed," one senior source in the NTC told Reuters. "He might have been resisting."
Driven in an ambulance from Sirte, his partially stripped body was delivered to a mosque in Misrata. Senior NTC official Abdel Majid Mlegta told Reuters that DNA tests were being conducted to confirm it was Gaddafi. He would be buried in Misrata, most likely by Friday according to Muslim custom.
Officials said his son Mo'tassim, also seen bleeding but alive in a video, had also died. Another son, heir-apparent Saif al-Islam, was variously reported to be surrounded, captured or killed as conflicting accounts of the day's events crackled around networks of NTC fighters rejoicing in Sirte.
In Benghazi, where in February Gaddafi disdainfully said he would hunt down the "rats" who had emulated their Tunisian and Egyptian neighbours by rising up against an unloved autocrat, thousands took to the streets, loosing off weapons and dancing under the old tricolour flag revived by Gaddafi's opponents.
Mansour el Ferjani, 49, a Benghazi bank clerk and father of five posed his 9-year-old son for a photograph holding a Kalashnikov rifle: "Don't think I will give this gun to my son," he said. "Now that the war is over we must give up our weapons and the children must go to school.
"But Gaddafi was a terrible dictator and this was the only way to get rid of him. We want everything people have in free countries - want people to live in peace as you do across the Mediterranean where life doesn't require the machinegun."
In Sirte, a one-time fishing village and Gaddafi's home town that Gaddafi's grandiose schemes had styled a new "capital of Africa" for the "king of kings", fighters whooped with delight and some brandished a golden pistol they said they had taken from Gaddafi.
Accounts were hazy of his final hours, though there was no shortage of fighters willing to claim they saw Gaddafi, who had long pledged to go down fighting, cringing underground, like Saddam eight years ago, and pleading for his life.
FINAL HOURS
One possible description, pieced together from various sources, suggests Gaddafi tried to break out of his final redoubt at dawn in a convoy of vehicles after weeks of dogged resistance. However, he was stopped by a French airstrike and captured, possibly some hours later, after gun battles with NTC fighters who found him hiding in a drainage culvert.
NATO said its warplanes fired on a convoy near Sirte about 8:30 a.m. (0630 GMT), striking two military vehicles in the group, but could not confirm that Gaddafi had been a passenger. France later said its jets had been in action at the time.
Libyan television carried video of two drainage pipes, about a metre across, where it said fighters had cornered a man who long inspired both fear and admiration around the world.
After February's uprising in the long discontented east of the country around Benghazi -- inspired by the Arab Spring movements that overthrew the leaders of neighbouring Tunisia and Egypt -- the revolt against Gaddafi ground slowly across the country before a dramatic turn saw Tripoli fall in August.