The fire that broke out at around 3 pm was stopped by the Police fire extinguishers before it could engulf the nearby buildings.

The fire that broke out at around 3 pm was stopped by the Police fire extinguishers before it could engulf the nearby buildings.

Police have started investigating the cause of a mysterious fire that broke out on Tuesday afternoon next to a contested building in Wandegeya that saw a container full of second-hand Television sets razed down.
The fire that broke out at around 3 pm was stopped by the Police fire extinguishers before it could engulf the nearby buildings.
Kampala Metropolitan Police spokesperson Patrick Onyango confirmed the incident and the destruction of the container and noted that they are trying to establish if there was any foul play or whether the fire was caused by an electric fault.
"It destroyed the container at the back of the building but we are yet to establish how it started and we are waiting for a report from Umeme," Onyango said.
There were earlier fears that the fire might have been started deliberately by people whose intention was to destroy the building under dispute.
Engineer Kyogi Binta, one of the owners of Friecca Pharmacy and Anthony Natiff Allianz, the owner of Allianz are the two businessmen contesting the ownership of the building. 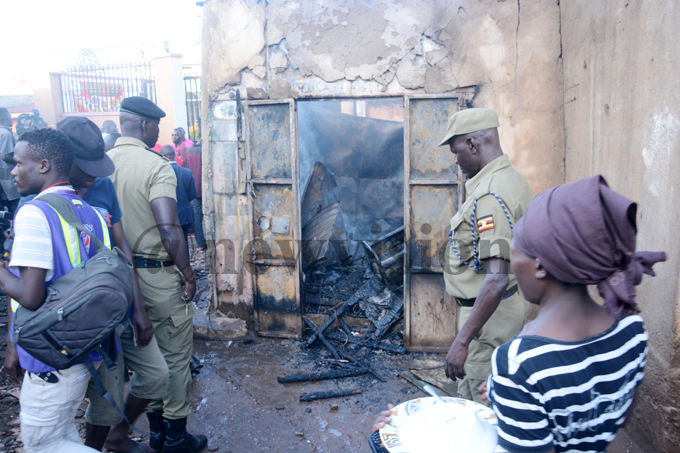 Last June, the building was illegally shut down by the police acting on the instruction of Eng. Kyogi's lawyer John Musiime, but was later opened after State Minister for Internal Affairs Obiga Kania intervened. However, when it was opened, it had been looted, prompting police to arrest night guards who had been deployed under the instructions of Musiime. Police searched the home of one of the guards Stewart Kasango and recovered stolen drugs. Kasango has since been charged and remanded.
Last week, the director Criminal Investigations Directorate Grace Akullo ordered the Police Special Investigations Directorate (SID) to take over the investigations after attempts by sections of the parties involved attempted to block police investigations.
The commandant of SID, Elly Womanya confirmed that they were hunting for the key suspects who were implicated in the break-in of Allianz Pharmacy and reportedly ordered the guards from Alert Security Company to load drugs and shelves estimated at shs580 million. One suspect was recently remanded after he was found with some of the drugs.
A manager of Alert Guards Patrick Balitebya in his statement recorded at Wandegeya indicated that they had been brought to guard the premises by a city lawyer John Musiime who was acting on behalf of Eng. Kyogi.
"As I was still deploying, another man came and the lawyer introduced the man to us as the caretaker of the building. The man introduced himself to us as Katamba," Balitebya stated. 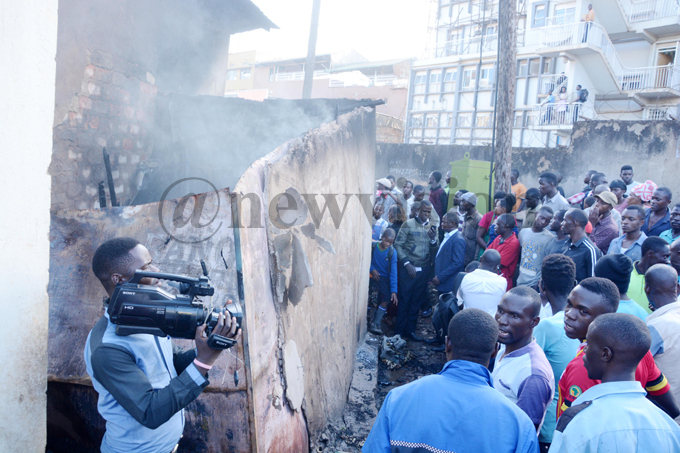 People gather to find out what happened

He also noted that on June 22, 2019, Katamba asked him for the keys of the gate, which he handed over to him. The Alert Manager further states in his statement that Katamba then handed over the keys to one Brian who guards says brought trucks and ordered them to load all the items on them.
The building was initially owned by two brothers Steven Nsubuga and Dr. Fredrick Njuki at the ration of 49.5% while their mother Eva Nabatanzi owned 1% shares. Last year Kyogi bought the building from Nabatanzi and Nsubuga who drafted a sales agreement and included Dr. Njuki. However, Dr. Njuki decided to sale his 49.5% shares in the building to Natiff making him a co-owner of the building.
In December last year, High Court Registrar Francis Emokor ruled that, Natiff had gained possession of the building and that the status quo was that Allianz Pharmacy was in possession and occupying it. He dismissed the case that had been brought by Nsubuga and Nabatanzi who attempted to evict Natiff on claims that he had trespassed on the building.