10 measures the government to undertake to...
Next Story

How the most dangerous criminal gangs operate

Some of the suspects who were arrested in connection with the murder of boda boda riders. Photo/File

KAMPALA - Police have named the 15 most lethal organised criminal gangs operating in Kampala and other parts of the country. Police say much as some members of the gangs have been arrested, the groups armed with guns and rudimentary weapons, such as machetes and pickaxes are still active.

According to the 2018 Police annual crime and traffic report released yesterday, the organised criminal gangs, which tormented Ugandans for a big part of last year, are engaged in kidnaps, murder, robbery, rape, trafficking and house break-ins.

Some of the criminals belonging to the organised gangs disguise themselves as taxi guides at various taxi stages in Kampala, where they lure their victims into taxis and kidnap them. 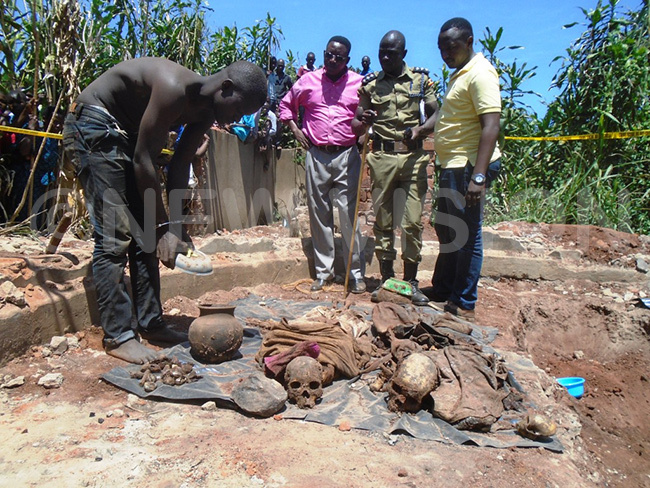 Ssebuyungo shows police and CMI operatives the blood he collected in a pot which he got from the bodies . Photo By Charles Jjuuko

"In 2018 and the previous years, organised criminal syndicates committed heinous crimes within Kampala Metropolitan Policing Area, Greater Masaka, Rwizi, Wamala and other areas," the report states. Top on the Police list is what they name as ‘Usafi Mosque criminal syndicate'.

This gang, according to the Police, is linked to the kidnap and murder of Susan Magara in February last year. The kidnappers had asked for $1m from the family but received $200,000 on the promise that they would free Magara. However, they later killed her and dumped the body in Kigo, off the Kampala-Entebbe Expressway.

The kidnappers held Magara for almost a month, haggling with the family for ransom. The Police later raided Usafi Mosque, where they killed two people and arrested several others in connection with Magara's kidnap and murder.

The Police said the gang members fought with them and one of the key suspects in the murder escaped in the ensuing scuffle. 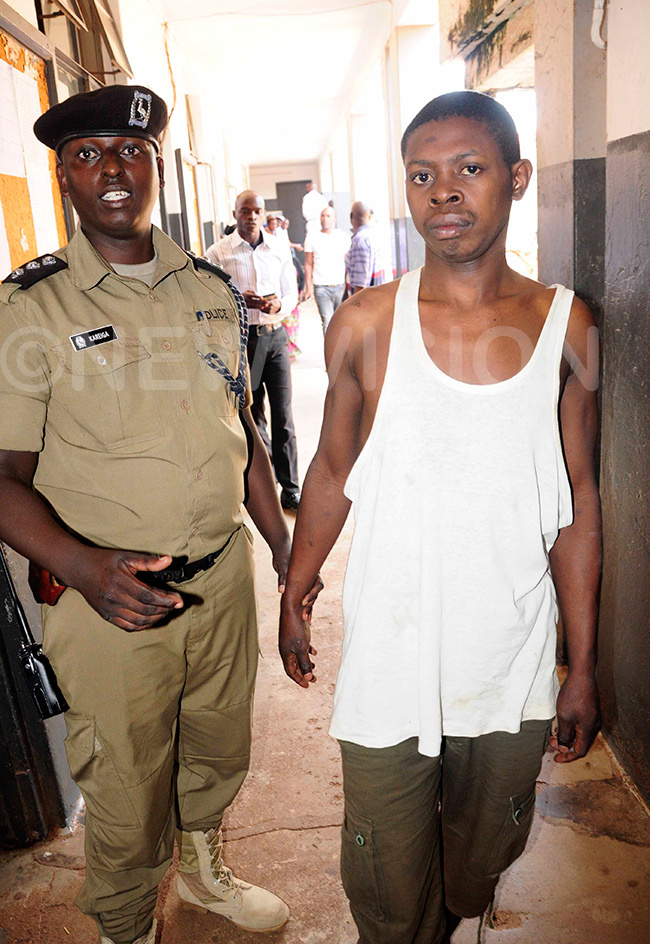 Others named were Hassan Kato Miiro, Abbas Musa Buvumbo, Abdul Hakim Lugolobi and Mahad Kasozi. According to the report, the members of the Usafi Mosque gang have committed several crimes, including murder, trafficking in persons, including 159 children and defilement.

The report also indicates that three of the group members — Abdulrahman Faisal, Abubakar Senono and Fatuma Kabasiita — were arrested by Mozambique security personnel in an ISIS (Islamic State in Syria) camp. The director of the Criminal Investigations Directorate (CID), Grace Akullo, said the syndicates use mobile phones to communicate and organise their crime activities.

"They recruit and pay their colleagues a salary, ranging from sh100,000 to millions of shillings, depending on the nature of criminal activity executed," Akullo added.

She said criminals contribute towards the operations of the syndicates by offering cars to facilitate crime. "Some are taking advantage of bodabodas to move around quickly," Akullo explained. 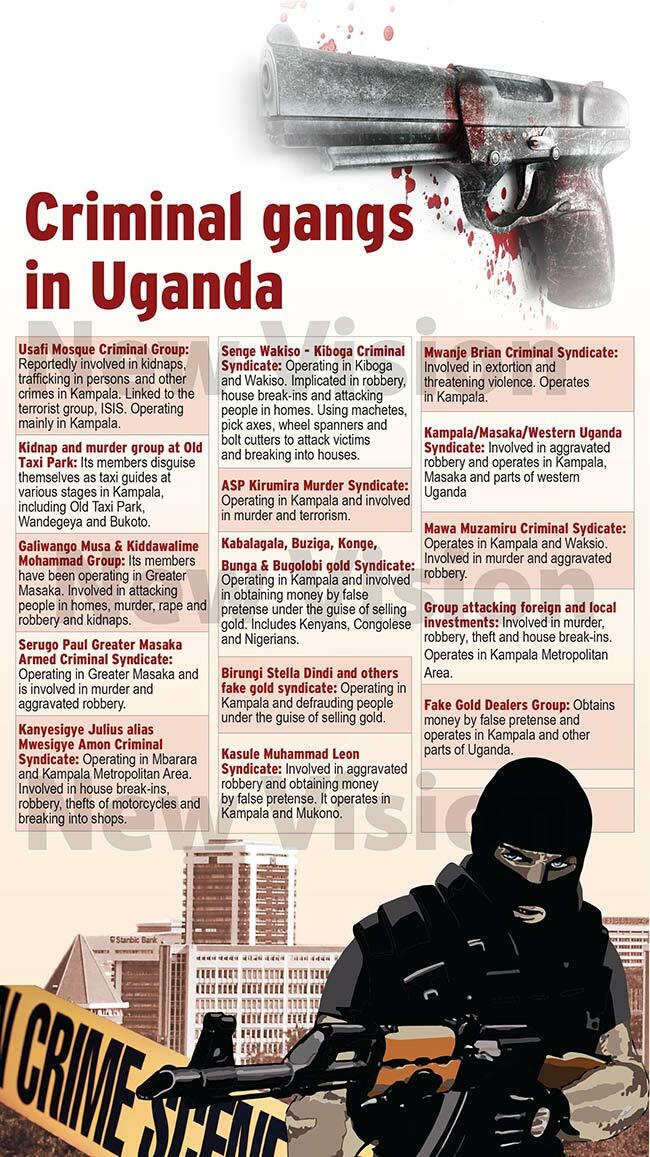 This group, according to Police, comprises a witchdoctor, Ssalongo Ddumba, Mugabi Kamada Shakur, John Bosco Oloo Alias Okello Kifeesi and Herbert Lukwago Ssalongo. "They would disguise themselves as taxi guides at the Wandegeya-Bukoto taxi stage in the Old Taxi Park. Between

March and May 2018, the syndicate kidnapped women and girls for purposes of procuring ransom, human sacrifice, and sexual assault," the report said. The Police said this gang kidnapped and murdered Rehema Nabwanika Halima on April 22 last year. Her body was discovered on April 24 at Kikajjo zone, Namasuba in Makindye Ssabagabo municipality, Wakiso district.

"The group met her (Nabwanika) in the New Taxi Park and lured her up to a witchdoctor's shrine for sacrifice," the Police said. The group is also accused of kidnapping and murdering Rose Nakisekka on May 10 last year. Her body was recovered at Kirinyabigo, Kanala zone, Makindye Ssabagabo on May 24. On March 22 last year, the gang reportedly kidnapped Charity Kyohairwe at the Wandegeya-Bukoto stage.

"Her kidnappers started demanding for a ransom and on March 23, her body was recovered in Kabawo zone in Nalukolongo, Rubaga division in Kampala after her parents paid a ransom of sh2,500,000. The same group members were arrested, charged and committed to High Court for trial," Police explained.

On May 6 last year, the gang allegedly kidnapped Milly Nalule Drinah from Old Taxi Park. They demanded a ransom from relatives and her body was recovered in Mbaho zone in Mutundwe, Rubaga division, Kampala on May 7. The gang reportedly kidnapped Shamsa Nakasujja, 17, on May 18 last year from the New Taxi

Park and demanded a sh10m from her parents. The victim reportedly escaped from the gang and the Police arrested Kamada Shakur Mugabe.

"The witchdoctor implicated in these cases wanted virgin girls and it turned out many of the victims were not. Those who were found not to be virgins were killed to avoid arrest," Akullo stated. Galiwango Musa and Kidawalime Muhammad gang

On January 1 last year, the group attacked villages in Kisaaka in Lwengo district and Kisojo A in Bukomansimbi district. It attacked the home of Francis Kateregga, the director of St Francis High School in Kisaaka village in Lwengo district. The group moved to Kisaaka trading centre and proceeded to attack John Bosco Sseremba and Gonzaga Kayemba.

On the same night, the gang raided Kyabagoma village, attacking Denis Ssebugwawo, a retired Senior Superintendent of Police, at his home. They robbed the family of money and injured his granddaughter Nancy Nabifo, who later died at Mulago Hospital. Later, the group raided Kisojo trading centre and attacked revellers at the home of Jane Nantale and then murdered her.

On April 10, 2018, the gang attacked Resty Nakyambadde, a midwife in Mukoko village, Kalungu district. They broke into her house and tried to rape her before the Police came to her rescue. One of the attackers — Kiddawalime Muhammad (now

deceased) — bit the left hand of a Police officer as he struggled to escape. He was injured in the scuffle and later died. 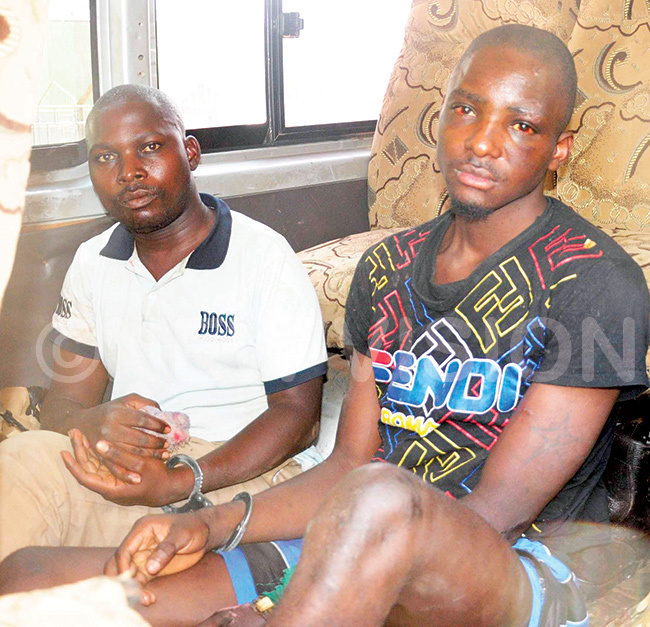 This is said to be led by an army deserter, Paul Serugo, who was attached to the Uganda People's Defence Force (UPDF) marines. It allegedly terrorised residents in Sembabule, Rakai, Lyantonde, Lwengo, and Masaka districts in March last year. Serugo and his alleged accomplices — Joseph, Byakatonda and Matia Kawadwa have been charged before the General Court Martial.

The Police said the SMG rifle the group has been using has also been seized. The group reportedly stole a gun from a Police officer in Rakai and killed two UPDF soldiers before taking off with their rifles in Masaka last July. It also reportedly carried out a robbery in Masaka town in the same month.

The group has been terrorising residents in Mbarara and Kampala Metropolitan Area, staging a string of robberies in various areas. According to Police, it is comprised Julius Kanyesigye alias Mwesigye Amon, Francis Musiguzi, Huzaifah Ssenabulya, and others still at large.

The gang reportedly attacked Betty Nangobi on October 19 last year in Lungujja, Mbubi zone, Rubaga division, robbing her of sh4m and items worth sh4m. Part of the group was arrested on the same day after a foiled robbery in same area.

On September 12, the gang stole property worth sh6m from a shop on Makhan Singh Street in Mbarara. Armed with pangas, irons iron bars, torches and metal cutters, the Kanyesigye gang robbed property, including alcohol worth sh5.8m, from a shop in Kisenyi street in Mbarara municipality on October 11. They also stole a motorcycle in Kakiika cell, Mbarara town on January 22 last year.

This group is said to comprise Kenneth Ssentongo, Henry Zziwa, Julius Byamukama, Musisi Mwesigwa, Thomas Kabanda, Wilson Kusemererwa, Ian Muko, and Ian Mweru. "The group is normally armed with pick axes, pangas and breaking implements like big bolt cutters and sharpened wheel spanners," the report said. The gang is said to have carried out a robbery in Senge village in Wakiso last year.

The gang is said to have killed Assistant Inspector of Police Muhammad Kirumira and Resty Naalinya on September 8, last year, in Bulenga A zone, Wakiso district. Some of the suspects in this murder case were also reportedly found in possession of an assortment of exhibits used for making improvised explosive devices, plus food supplies and gumboots destined for the Allied Democratic Forces in the Democratic Republic of Congo, Police said.

The other groups, including Muhammad Kasule Leon syndicate, are accused of fleecing people of their money under the guise of selling them gold. This story was done with the support of Democratic Governance Facility (DGF)