As he pounded the miles away on that foggy course, his record stressed yet again that if you put hard work into any task, positive results are inevitable

As he pounded the miles away on that foggy course, his record stressed yet again that if you put hard work into any task, positive results are inevitable

Kenyan athlete Eliud Kipchoge is a living testimony that with hard work, discipline and determination, anything is possible.

Kipchoge on Saturday morning strode into the record books in Vienna as the first man to run the marathon under two hours.

He has for two decades put all grandeur aside leading a monastic lifestyle as he invested hundreds of hours in training.

The result has been numerous accolades that at the weekend climaxed in a new landmark.

Some have equated this jaw-dropping feat to the first landing on the moon. It was a real chef-d'oeuvre that transcends all forms of boundary and from which people from all walks of life should draw lessons.

As Kipchoge pounded the miles away on that foggy course, his record stressed yet again that if you put hard work into any task, positive results are inevitable.

What better message for a country like Uganda, which has one of the biggest youngest populations in the world?

Isn't it this kind of attitude that transformed China, Japan and the Asian Tigers? If like Kipchoge we were to include hard work, discipline and determination in our work ethic, wouldn't Uganda be a true pearl?

Like someone once put it, our current state largely has a lot to do with our mindset. We are not conditioned to give our best in whatever we do.

Uganda's performance at the just-concluded World Championships in Doha provides just yet another example of our complacency.

We could have easily wound up closer to the top of the overall medal standings but lack of this X-factor limited our performance. 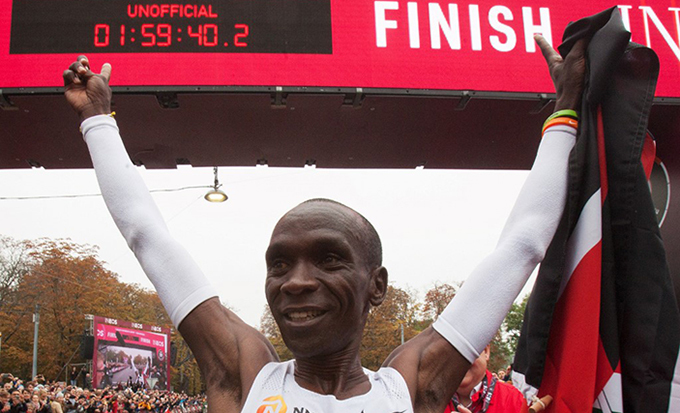 Everyone on Team Uganda was fit, but as it turned out only two athletes had the conviction that they could make it to the podium.

Kipchoge aptly describes that quality that many Ugandans lack: "Athletics is not so much about the legs. It is about the heart and mind."

It is a winning mindset that only Joshua Cheptegei and Halimah Nakaayi had. Nakaayi's belief was one of those things that got everyone off guard.

With stars like Ajee Wilson, Raevyn Rogers and Eunice Jepkoech in her 800m final, no one gave the Ugandan a chance.

But like Kipchoge on Saturday, she was confident she could make it to the podium. This state of heart and mind indeed paid off with gold.

It was no different with Cheptegei in the men's 10,000m final. When Ethiopia's Yomif Kejelcha stepped on the gas in those final two laps many Ugandan athletes would have given up.

But not Cheptegei. He had this belief that he could do it. And indeed his fighting spirit paid off.

As a nation, if we all had this kind of mindset we would also be winning gold medals in development.

It is what Kipchoge describes as dedicating heart and mind.