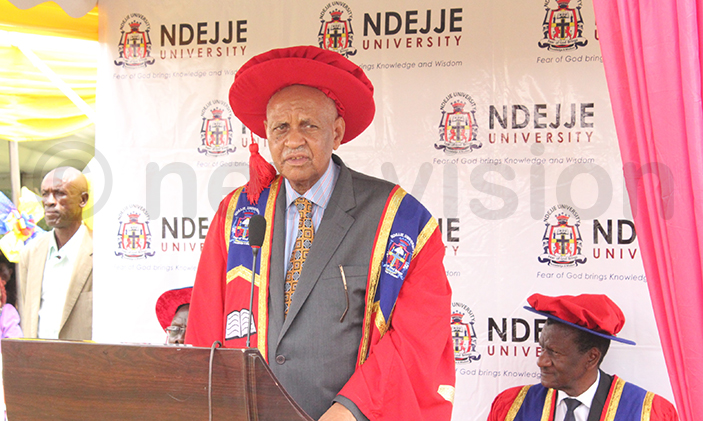 As the Uganda National Examination Board (UNEB) examinations get underway on Monday with Senior Four candidates sitting for exams, Prof. Mondo Kagonyera has warned students against indulging in examination malpractices.

Speaking at the 21st graduation ceremony of Ndejje University on Friday at the main campus in Luweero, Kagonyera noted that examination malpractices including paying bribes for better grades are hindering the country's development.

"I, therefore, appeal to you learners not to pay money to remain ignorant," he said.

Kagonyera, the former chancellor of Makerere University, blamed election malpractices on the country's education system that he said encourages students to pass the examinations instead of equipping them with the necessary knowledge.

"There is a need to rethink the value of our education," he said. "Africa is the richest continent with a number of resources like minerals (gold and diamonds), but we have lagged behind in terms of development because of the failure to exploit knowledge."

Kangonyera noted that if the educated youth are equipped with the necessary knowledge, they should be able to challenge the status quo in areas of technology and even politics.

With such knowledge, he said, the youth shouldn't be struggling to find jobs. He also castigated hooliganism in institutions of higher learning.

"Why should students behave like sugarcane cutters? I am disappointed by the hooliganisms at Makerere University where I have committed my 30 years of service," he said. "If I am an employer and I see you destroying property, I can't give you a job."

A total of 1988 students graduated during the 21st graduation ceremony that ran on the theme Mainstreaming Higher Education in National Social Economic Development.

The university's chancellor, Dr Wilberforce Kisamba Mugerwa emphasised the value of higher education, arguing that it is an important form of human capital development.

"Higher education has a potential of being a driving force of economic development in Uganda and globally," Kisamba said. "Moreover, the highly educated individuals earn higher incomes and these raise tax revenue for the country and the society's wellbeing."

Prof. Eriabu Lugujjo, the vice-chancellor, noted that the university is harnessing sciences but that they require a robust and effective higher education system to teach.

He said that all the courses at Ndejje are accredited and that the university keeps revising the curricular to ensure that they match the demands on the job market.