The youngest member of Team Uganda, Godfrey Nsubuga, remained the best performer on the team

The youngest member of Team Uganda, Godfrey Nsubuga, remained the best performer on the team

There was general improvement across the board as the All Africa Team Golf Championship raged on at the Mont Choisy Le Golf course in Port Louis, Mauritius on Friday.

Apart from Uganda and Namibia, there was an improved performance from each of the 14 countries taking part in the biennial event.

Uganda who was second after the first round slipped to fourth place after failing to improve on their first round score, and instead, adding 5 strokes to their total.

The youngest member of Team Uganda Godfrey Nsubuga remained the best performer on the team after the second round having returned two-over 74.

Joseph Cwinya-ai and Rodell Gaita's 76 and 78 gross respectively also counted for the day's score for Uganda but it was surpassed by Morocco's ten-stroke improvement that saw them jump to second place.

Eswatini also improved their first-round score by seven strokes and are now joint third with Uganda on 451 gross each.

Nsubuga is sixth overall in the individual standings with 147 gross while Cwinya-ai is 12th, four strokes away. 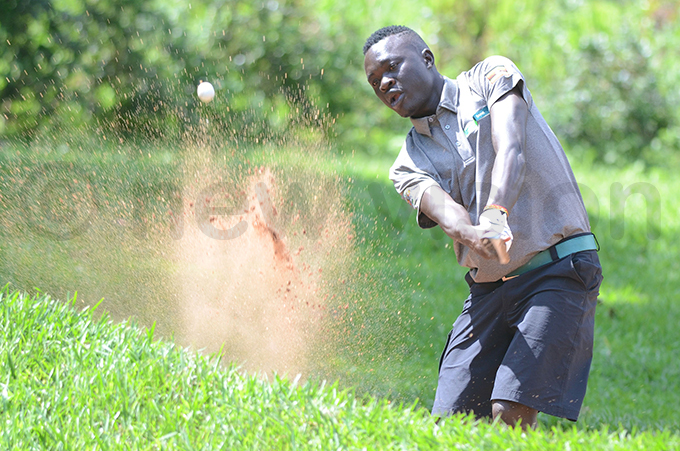 Team Uganda's captain Cwinya-ai is in 12th place in the individual standings with two rounds to go. Photo by Michael Nsubuga

The three South Africans improved their first-round score by 15 strokes to remain in the lead, going into the third and fourth rounds on Saturday.

The four-day stroke play championship is played over 72 holes, with 18 tackled every day. The best three gross scores from the four players from each country count in every round with the lowest aggregate gross score for the team over the four rounds winning the championship.

In addition to the gross score, the team with the best net score other than the teams in first or second place will receive the net winning prize.

An individual competition normally runs alongside the Africa team event with the player who returns the lowest aggregate score over the four days winning the individual stroke-play trophy.

In 2015, Ronald Otile shone for Uganda but came two strokes short of taking the individual accolade at the championship held at Limuru Golf and Country Club in Nairobi.