With the country's third national development plan (NDP III) set to come into force in June next year, the government has vowed to prioritise nutrition, in light of mixed progress on key targets.

The current NDP II, whose goal is to propel the country into middle-income status by 2020, will be phased out at the end of this year.

The Uganda Demographic and Health Survey of 2016 shows that 29% of Ugandan children are stunted, 3% of them wasted, 32% of women of reproductive age are anaemic.

"Nutrition is a major development challenge for the country," said Joses Tegyeza, commissioner for strategic coordination and implementation at the Office of the Prime Minister at the retreat.

"Cabinet approved the NDP III and we don't want nutrition to be left behind because it is key. The draft plan highlights our commitment to address malnutrition in all its forms," he stated.

Uganda is one of eight countries benefitting from the National Information Platforms on Nutrition (NIPN), an initiative to support countries with a high burden of undernutrition. 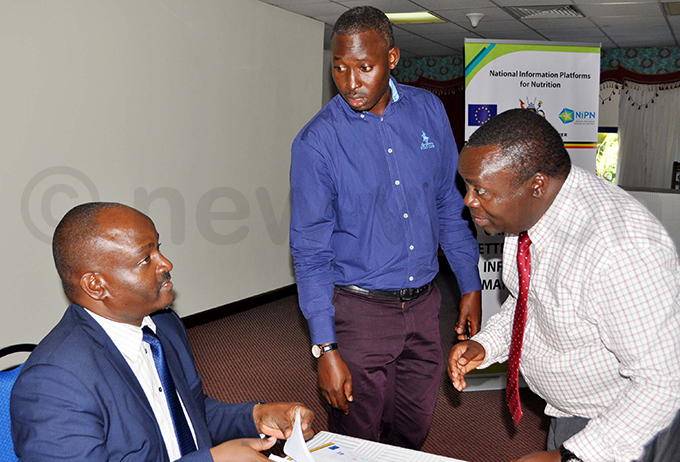 (L-R) Joses Tegyeza the commissioner strategic coordination and implementation in the Office of the Prime Minister, National Information Platform for Nutrition's Nassul Kabunga and Patrick Nganzi interacting during the stakeholders retreat held at Imperial Resort Hotel in Entebbe. Photo by Shamim Saad

Each of the countries receives financial support from the EU and technical assistance from international experts to establish national platforms on nutrition.

The four-year project in Uganda is supported by the European Union (EU) and implemented by the Office of the Prime Minister.

Patrick Nganzi, the Senior Policy Advisor for the project told New Vision that the initiative would support institutions to have access to real time information for use in policy making.

"We have a lot of information on nutrition but it is scattered across different agencies. We have come up with a dashboard which will provide real time information for policy makers," he stated

According to Nganzi, government and key actors will be in a position to map places across the country, monitor trends and target areas that are enmeshed in various forms of malnutrition.

Although Uganda is a leading producer of food in the region, the country has faced problems of malnutrition, with pockets of famine and hunger taking a toll in seasons of inclement weather.

The earlier Uganda Demographic and Health Survey of 2001 found that over 38% of the children below 5 years were stunted, 4% wasted and 22.5% under-weight.

Micro-nutrient deficiencies were common; vitamin A deficiencies stood at 5.4%, iron deficiency anaemia at 50%, while 10% of the women were undernourished.

The National Food and Nutrition Policy, established in 2003 set out to tame the high levels of malnutrition, which accounted for 40% of childhood deaths at the time.

The final Country Report on the Millennium Development Goals (MDGs) indicated that targets under goal 1, to eradicate extreme poverty and hunger, and under goal 4, to reduce child mortality were "narrowly missed."

Malnutrition in children in Uganda is linked to the high burden of disease resulting from malaria, diarrheal diseases and acute respiratory tract infections, as well as inadequate dietary intake resulting from suboptimal infant feeding practices and limited availability of food.

Under the NIPN initiative, the government is supporting the production and use of data and statistics to facilitate evidence-based policymaking, programme planning, and accountability.