Uganda in pictures on October 3, 2019
Next Story

The 3.89-acre piece of land is part of the 85 acres that the late Paul Katabazi Bitarabeho bought in 1978 from the late Namasole Bagalaayeze Lunkuse.

A court verdict on the land in question in on today

The 3.89-acre piece of land is part of the 85 acres that the late Paul Katabazi Bitarabeho bought in 1978 from the late Namasole Bagalaayeze Lunkuse.

KAMPALA - The long-awaited judgment in the Lusanja land matter was delivered Friday, with High Court judge Tadeo Asiimwe ruling that businessmen Medard Kiconco is the rightful owner of the land.

The 3.89-acre piece of land is part of the 85 acres that the late Paul Katabazi Bitarabeho bought in 1978 from the late Namasole Bagalaayeze Lunkuse, the mother of fallen Buganda King Mwanga.

Bitarabeho's descendants are said to have sold part of the land to Kiconco, who later evicted some of the tenants from it.

Kiconco maintains he bought the land comprised on block 206, plot 671 at Mpererwe in Kampala in 2016 while the residents say their land is on block 198, Folio 13 in Wakiso district.

The businessman says that by the time he bought the land from Bitarabeho's descendants in 2013, there were only 17 squatters, whom he says he compensated. 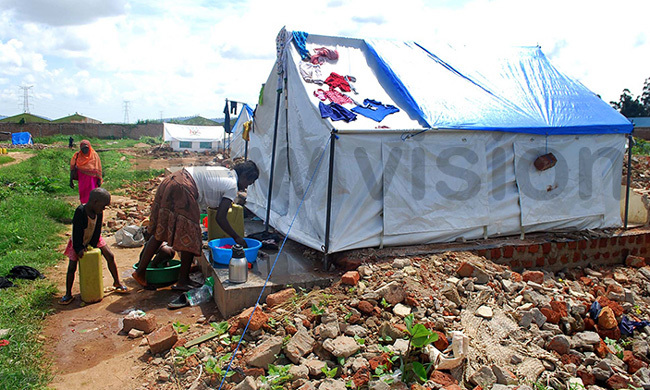 In March this year, this resident of Lusanja whose home was demolished did laundry in front of a makeshift tent her family shared with another family. (Credit: Lawrence Mulondo)

On January 12, 2017, Kiconco filed a suit at Nabweru Chief Magistrate's Court, seeking orders for abetment of a nuisance, demolition order, delivery of vacant possession and award of damages plus costs of the suit.

Later that year in October, Nasambu delivered judgment with orders declaring the defendants as trespassers, demolition of structures and sh20m in damages plus costs of the case.

It is upon this ruling that Kiconco went to the High Court's execution and bailiff's division and secured a demolition order from deputy registrar Baker Rwatooro on August 23, 2018.

The President says that Govt will refund the victims of the demolition once it is clearly established that the eviction was illegally carried out. #VisionUpdates


The eviction attracted mixed reactions from many Ugandans, including President Yoweri Museveni, who visited the land with Justice Catherine Bamugemereire, the chairperson of the commission of land inquiry, on October 16, 2018, and halted further eviction and demolition of houses.

This prompted the Principal Judge, Yorokamu Bamwine, to direct the Land Division of the High Court head, John Eudes Keitirima to hear the case afresh.

On December 14 last year, Keitirima ruled that the residents were wrongfully evicted from the Lusanja land because the trial magistrate had no powers to handle the case.

Lusanja victims not yet cleared to resettle on land - Judiciary

PLE Pupils To Number One Million By 2003