The report entitled ‘REWRITE HER STORY’ highlighted that male leaders are much more visible overall compared to female characters shown on screen as leaders.

The report entitled ‘REWRITE HER STORY’ highlighted that male leaders are much more visible overall compared to female characters shown on screen as leaders.

The state of the world's girl's report 2019 has shown that girls and women are not well represented in the media and film industry.

The report entitled ‘REWRITE HER STORY' highlighted that male leaders are much more visible overall compared to female characters shown on screen as leaders.

It reveals that 24% of female representation in news sources compared to 76% of males and 32% female journalists.

It focused on how film and media stereotypes affect the lives and leadership ambitions of girls and young women.

The report further added that girls are influenced by what they see on screen, male characters still dominate storylines, men are more visible, presented as more effective. 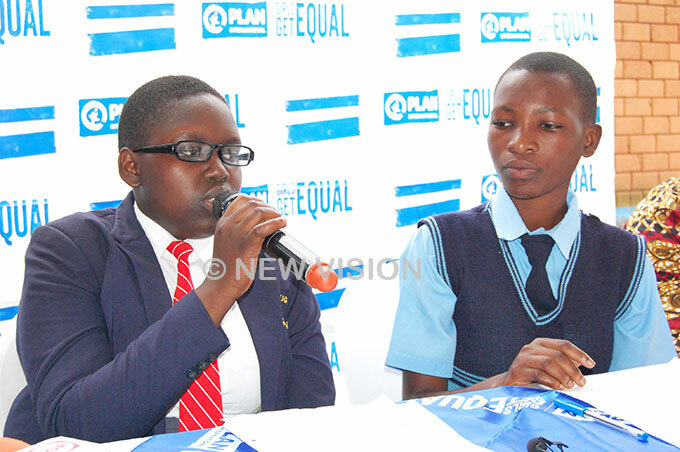 Angella Inzukuzu (left) a Student from St. Denis secondary school speaking as Juliet Nameere from Kansanga seed school look on during the launch of the state of the world's girl's report2019. (Photo by Sylvia Katushabe )

This implies that girls who watch the moves or news do not have role models to look up to inspire them to take on leadership.

Speaking during the launch of the key findings at Plan International offices in Bugolobi, the Country manager- Advocacy and influencing Irene Kagoya said that female leaders are nearly two times more likely to be shown as partially nude than the male leaders. In addition, the survey noted that online media is becoming more hostile to women and girls as they are subjected to online violence.

''The society continues to believe that women and girls are sexual objects that all you need to consider them is their beauty, not intellect,'' Kagoya said.

According to the Uganda Demographic Health Survey of 2011, 56% of women in Uganda have experienced physical violence at some point since the age of 15 years. One million Ugandan women experienced sexual violence in 2017.

However, the report found out that female leaders were shown to be more intelligent (81%) than male leaders (62%).

The chairperson of Uganda Parliamentary Women's Association (UWOPA) Pamela Nasiyo said the law on Computer misuse should be regulated and crack down those who negatively portray women on social media, for instance, those who are found of circulating nude pictures and videos of women.

Juliet Namere a student of Kansanga Seed Secondary, appealed to film and media industry to show the public more stories about women in leadership so that people are encouraged to become leaders. And in addition to stop showing girls and young women as sex objects on television and make sure that what they show does not portray negative stereotypes.

The report recommended that media should desist from publishing content that portrays women and girls in a negative manner, and media bodies to start recognizing media houses which are promoting gender equality