Pochettino tells Spurs to stay together after Bayern humiliation

Tottenham conceded seven goals at home for the first time in their history as Bayern ran riot in north London.

Tottenham conceded seven goals at home for the first time in their history as Bayern ran riot in north London.

Tottenham Hotspur's Argentinian head coach Mauricio Pochettino. AFP
Mauricio Pochettino urged Tottenham to "stay together" after his troubled side suffered a humiliating 7-2 defeat against Bayern Munich on Tuesday.
Tottenham conceded seven goals at home for the first time in their history as Bayern ran riot in north London.
The astonishing thrashing came just a week after Pochettino claimed his players had "different agendas" amid fears transfer speculation has destabilised last season's Champions League runners-up.
But this time Pochettino refused to let rip at his players in public as he insisted they must not let the embarrassment break them.
"In football, it can happen. Every single touch went in. We are very disappointed and very upset but we have to stay together. I think we are strong in our mentality," Pochettino told BT Sport.
"This type of situation you have to face. It is tough and you need to be strong and keep going. Stay together, help each other and be all together.
"When you receive this type of result it is important to bounce back and believe in yourself. It is the only way to recover."
It was the latest chastening result for Tottenham in a dismal start to a season that has already included a shock League Cup exit at minnows Colchester and a home defeat against Premier League strugglers Newcastle. 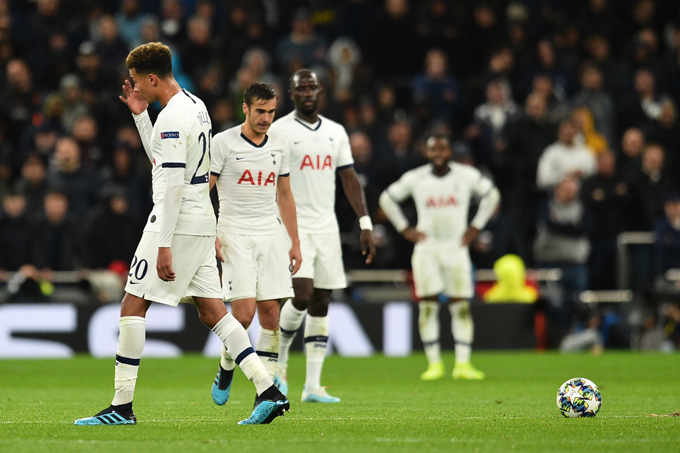 Tottenham have leaked seven goals for the first time since 1996 when they suffered a 7-1 defeat at Newcastle.
They have won only three times in 10 games in all competitions this term and Pochettino admitted his players can't afford to live off past glories.
"Maybe you are bored about my speech but football is today not yesterday. It is always is about the show. You have to do it today and tomorrow. It is not about experiences and what happened three months ago," he said.
"We are disappointed. Every single touch from Bayern was clinical. They scored with every touch. It is tough to accept. You have to move on."
Four of Bayern's goals were scored by Serge Gnabry, who used to play for Tottenham's north London rivals Arsenal, while Robert Lewandowski netted twice.
Bayern's ruthless finishing exposed Tottenham's soft centre as they surrendered without a fight in the visitors' five-goal second half.
"I don't need too much time to explain. We played 30 minutes well, started well, pressing high. But we were unlucky that we conceded in the last minute of the first half," Pochettino added.
"They were very clinical. After we scored the penalty for our second goal, we had chances to score the third. But from the 83rd and 88th minute we conceded three more goals."
RELATED STORIES
What happened in the Champions League?

Woman arrested for allegedly burning her son to death