MENU
They came, they conquered where are they now?
Previous Story

My trip to Indonesian Archipelago

I have always wished to travel to Indonesia, not because I am a Muslim and that it has the largest Muslim population in the world, but because it is the world’s biggest archipelago. So, when I got the good news that I had won a week’s familiarisation trip to Indonesia, I was overjoyed.

The writer taking a picture at the peak of Piaynemo. In the background are some of the islands in Indonesia. Photos/Courtesy

I have always wished to travel to Indonesia, not because I am a Muslim and that it has the largest Muslim population in the world, but because it is the world’s biggest archipelago. So, when I got the good news that I had won a week’s familiarisation trip to Indonesia, I was overjoyed.

Indonesia is the largest archipelago in the world with over 17,508 tropical islands fringed with white sandy beaches. In July, Umaru Kashaka and 14 other journalists visited the country and he shares his experience.
I have always wished to travel to Indonesia, not because I am a Muslim and that it has the largest Muslim population in the world, but because it is the world's biggest archipelago. So, when I got the good news that I had won a week's familiarisation trip to Indonesia, I was overjoyed.

I had finally got the chance to visit Southeast Asia's biggest economy of over 215 million people and over 300 ethnic groups strung across more than 17,508 islands.
I did not have to apply for a visa because Uganda has a free visa exemption agreement with Indonesia. 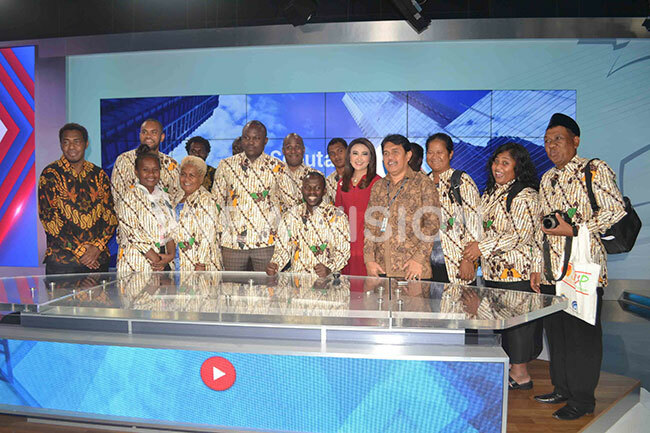 The writer (second-right) with some of his colleagues he travelled within the batik customised shirts
Travel
On July 6, I boarded an Emirates Airline plane to begin one of the most amazing trips of my life. The plane covered about 9,074km before it touched down at Jakarta International Airport on July 7.

At the airport, I was met by staff from Puri Travel and Journalist Visit Programme (JVP) committee who drove me away to Hotel Aryaduta in Central Jakarta where I would stay for two days. 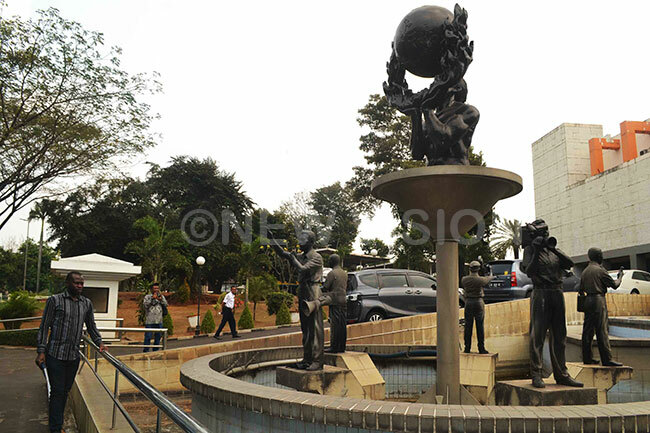 Kashaka at the information museum
In the evening, I joined my colleagues at Hotel Borobudur in central Jakarta, for dinner which consisted of steamed rice accompanied by side dishes of meat, fish, eggs, vegetables and chili sauce.

The meal reflected Indonesia's diverse cultures and traditions. During supper I learnt that rice is a staple food for the majority of Indonesians and holds an important place in the country's culture, drives the economy, shapes the diverse landscape and is served on most meals.

After supper, my colleagues and I were given the customised shirt (batik), which is traditionally worn by government employees or during formal occasions. 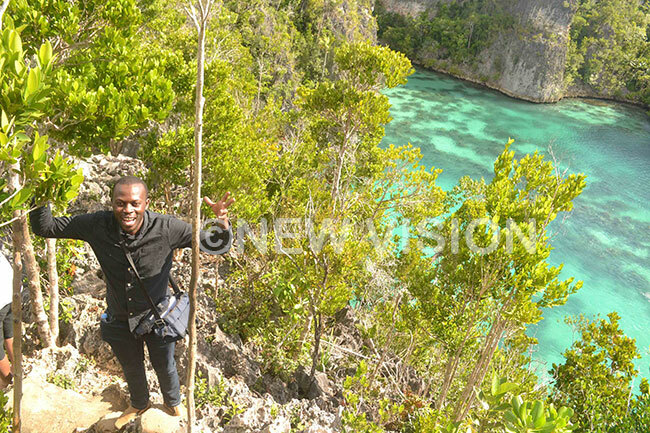 Our tour of Indonesia started on July 8 in Jakarta, a huge and sprawling metropolitan city with a population of over 10 million people. It sits on swampy land with the Java Sea lapping against it and 13 rivers running through it.

We had a joint breakfast meeting with Indonesia's foreign affairs minister Retno Marsudi and her communication and information technology counterpart, Bapak Rudiantara at Hotel Borobudur.

Retno briefed us about the country's foreign policy and said Indonesia will continue to pursue its role as part of the solution and not the problem.

"Indonesia endeavours to continuously contribute to world peace and this is embedded in our constitution. Indonesia always puts forward co-operation and a ‘habit of dialogue," she said. 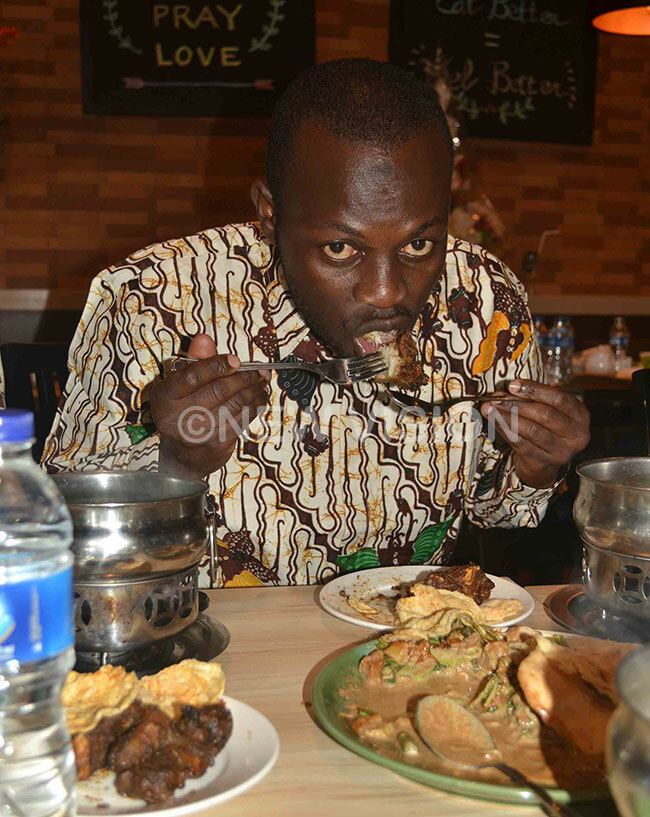 Kashaka enjoying a meal in one of the local restaurants in Jakarta
After breakfast, we set off for a comparison study at MNC TV, the largest and most integrated media company in Southeast Asia. It operates four of Indonesia's 11 free-to-air TV stations. It also owns the largest content production company.
Currently, MNC tops Indonesia's television industry both in audience shares as well as revenue shares. It also owns radio, print media, talent management company and TV production companies. 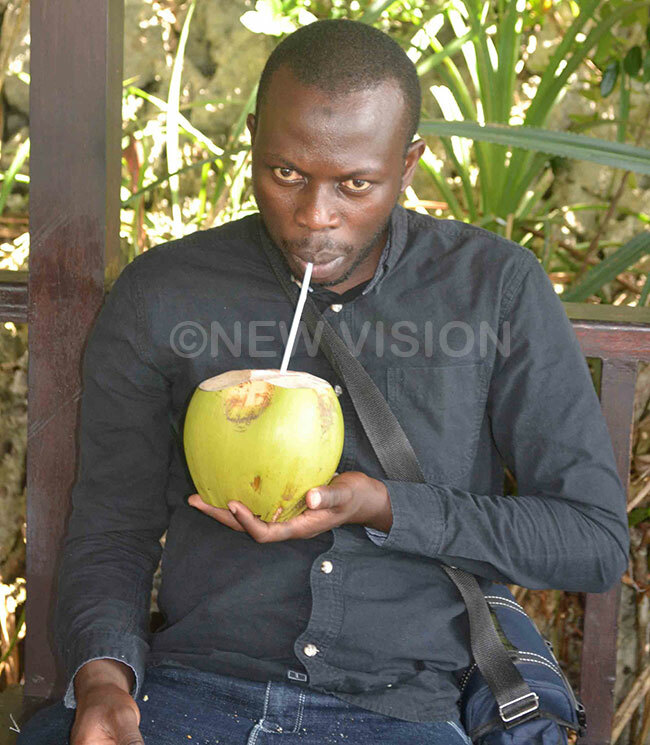 The writer sipping on coconut juice during his trip to the Indonesian archipelago
Aloysius Guntur, the company's vice-president of new business co-operation and policy, said PT Kereta has 591 active stations with 2,000 ticket counters. He said they make 1,751 trips per day.
"Last year, we made $1.3b in revenue," Guntur said.
We concluded the day's tour with a visit to Go-Jek Indonesia. Thysa Lestari, the company's public policy and government relations senior associate, said Go-Jek started in 2010 and in 2015, the first Go-Jek App was launched.

Puspita Anggraeni, the corporate secretary, said for WIKA, self-development is a must. He said since emerging as one of the biggest state-owned enterprises in Indonesia, overseas expansion was inevitable.

"Our vision is to be the best engineering procurement and construction company in Southeast Asia by 2020, our company is currently focusing on expanding our overseas operations to not only the Middle East and Southeast Asia, but also to South Africa and the Indian sub-continent including Sri Lanka and Bangladesh, within the next five years," he said.

In the afternoon, we visited the information museum, where we were welcomed with an Indonesian drink, Es Cendol. The delicious iced sweet dessert contains droplets of green rice flour jelly, coconut milk, and palm sugar syrup.

The Musuem's crew also offered us traditional cakes on banana-leafed tampah. We began our visit by observing the storyline of Indonesian communication and information services. 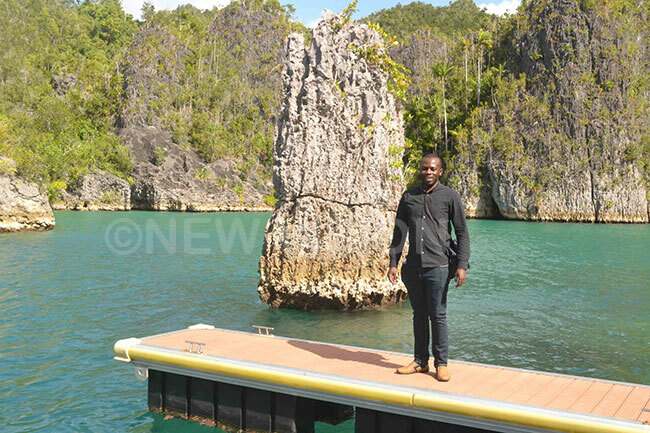 We later gathered with the museum crew and the representatives of the ministry of communication and their foreign affairs counterparts in the middle of the wide dome-shaped contemplation room on the second floor for a selfie session.

The contemplation room has circular white relief walls. We formed a circle while looking towards a smartphone on the floor that is installed in selfie mode. When the photos were shown, all of us were amazed at the background of the photo that was Museum's ceiling.

Before leaving, the head of the Museum, Abdullah, invited us to shout "Museum in My Heart" while putting our right hands on our left hand side of the chest. That is the greeting of the museum. "Museum in My Heart!" we shouted.
Flying to Yogyakarta
In the evening, we flew with Garuda Indonesia Airline to Yogyakarta, often called Jogja. It took us one hour and 10 minutes to get to the cradle of civilisation on Java Island. It is culturally rich in ancient Javanese arts and it is multicultured and has an impressive lineage of Hindu and Buddhist kingdoms that left behind elaborately intricate religious temples and palaces.

They include the sculptural Prambanan Temple, an important Hindu site dating to the ninth century, and the eighth-century Borobudur Temple — said to be the largest Buddhist monument in the world.

We stayed at Yogyakarta Marriott Hotel for two days.
Our third day into the trip started with a journalism training at Sekolah Tinggi Multi Media campus in Yogyakarta. Dr. Sudono, M.Si, lectured us about journalism and code of conduct in the global era.

We later left for the Batik factory at the royal palace of Yogyakarta.
Batik is a traditional Indonesian method of decorating fabric using wax to create patterns on cloth that is dyed. We also paid a courtesy call to the head of co-ordinating board of investment of Yogyakarta.

On the fourth day of the trip, we attended a diplomatic forum on the success of Indonesia's 2019 general elections at Yogyakarta Marriott Hotel.

For the first time, Indonesia held its presidential and legislative elections on the same day (April 17), with 192 million voters.

We were told by government officials that the enthusiasm of voters in the election was quite high, with participation reaching 81%.

We also toured HS Silver industry in Kotagede. Kotagede is known as the centre of the Yogya silverwork industry for tastefully incorporating elements of Javanese culture into simple and elegant jewelry styles.

At this industry, we learnt the process of making silver and took a short course where we crafted and took home our own jewelry.

Prior to this trip I never had any idea about the process or the work that goes into creating some of these stunning pieces of jewelry. Since we were in a hurry, they sent our finished products to our hotel.

We ended the tour around the city with a visit to Monggo Chocolate Factory.
Here, we also learnt how to make our own chocolates and compare different kinds of chocolate drinks with different percentages of cocoa.

The factory has an eclectic selection of dark chocolates and bite-sized treats.
Kashaka's visit was courtesy of Indonesia's ministries of foreign affairs and communication and informatics.
Flying to Sorong
We left Yogyarkata at 20:10 GMT for Sorong city, which is well-known as the gate of the land of West Papua province. But to get to Sorong, we had to fly back to Jakarta. From there, we took another flight of about four hours to Sorong. We landed at Domine Eduard Osok Airport at the break of dawn. Without further ado, we boarded a bus to Swiss-belhotel Sorong where we stayed for two days.

On the fifth day, we had lunch with the mayor of Sorong Lambert Jitmau. Jitmau told us that Sorong, a land rich in natural resources, especially oil, has a population of approximately 307, 229 people. 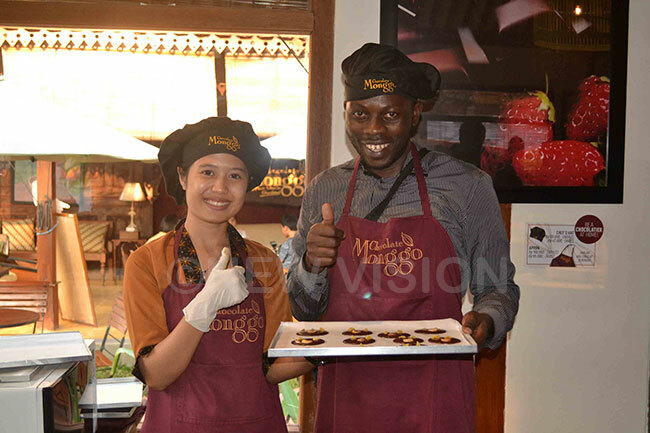 The boat ride
The speedboat ride along the Pacific Ocean on July 13 was the climax of our tour. We were heading to Raja Ampat, a remote and idyllic island chain in West Papua, to visit two hills, Piaynemo and Telaga Bintang (star lagoon).

Our first destination was Piaynemo. As soon as our boat berthed at the pier we stepped on to a wooden platform. There are sign boards positioned along the way advising visitors to maintain cleanliness and preserve the environment.

At the entrance of Piaynemo, there are also some stalls for local people selling local products and food, young coconut water, and even live coconut crabs that look like spiders. I saw the enthusiasm of these local people by the way they were welcoming us there. They were so friendly and accommodating.  But we were eager to reach the peak of the Piaynemo and see the most iconic Raja Ampat's scenery. 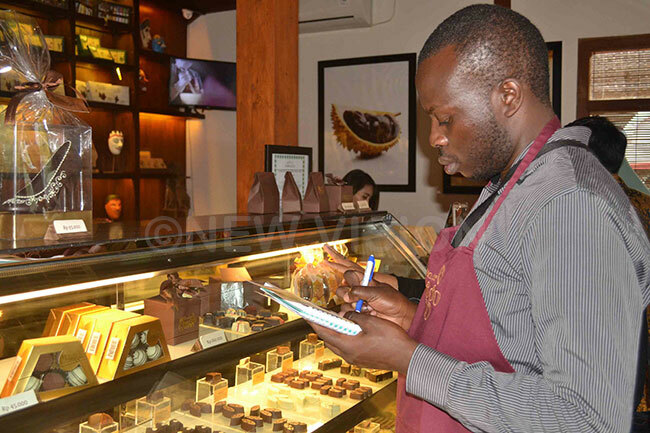 Kashaka taking notes at the Monggo chocolate factory
We climbed 340 steps to get there. The stairs have handrails and two resting places with benches and shades. I treaded one step at a time. There are thick trees on both sides of the stairs so we didn't feel the sun beating down on our heads.

It took us about 15 minutes to reach the top of the coral hill. From the top, we saw a row of small green islands scattered in clear water that looks turquoise.
We used the two spots shaped like a wooden stage to take pictures and enjoy the view of coconut trees, ships passing and rippling sea waves that appeared calm from a distance.

Karst rocks jut out of the surface of the sea to form a neat islet composition. Even though it was tiring, the view at the top was satisfactory We then set off for Telaga Bintang, which means star lake.

It is about five minutes away by speedboat. It is still in the Piaynemo cluster and it is named so because of its star-like shape, which makes the place beautiful to look at.

The turquoise-coloured waters are also surrounded by coral hills that form stars. Unlike Piaynemo, we climbed the hill without the help of wooden stairs.