Nanyondo and Nakaayi looking for podium fi...
Next Story

Johnny McKinstry has been appointed to replace Sebastien Desabre as the Uganda Cranes head coach on a three-year contract.

Before taking the Cranes job, the 34-year-old Northern Irishman has been the head coach of Bangladesh side Saif Sporting Club.

"I'm very honoured. There is no doubt that the Uganda national team is one of the best international jobs in Africa at the moment in terms of the direction the team is going, the level of competitiveness and the ambition of FUFA," McKinstry said.

"I am excited about the days, weeks and months ahead because of the quality of players that I will now have the opportunity to work with are a group of players that I feel we can achieve a lot with," he added.

"Supporters of the Cranes should be very excited as well because we don't just want to continue at the level we are at but to continue to build and grow so that even more success comes the way of Uganda in the coming years," he added. Talking about his knowledge of the game in Uganda, McKinstry said having coached next door in Rwanda and faced Uganda on occasion, he is well aware of the quality of players and the competitiveness of the local league.

"Their real desire and drive to achieve success are maybe similar to our West African colleagues. You look at the style of play of the likes of Nigeria and Ghana and their physicality and hunger for success, I look at the Ugandan league and the Cranes and see similar qualities and that is a very good starting point," he said.

McKinstry shrugged off suggestions that he would emulate Desabre and quit the job if he gets more lucrative offers elsewhere, explaining that he only quit the Rwanda job over impatience on the part of his employers.

He also spoke of his burning desire to see Uganda qualify for the 2022 FIFA World Cup in Qatar.

"Ever since I started in coaching, I've always wanted to go to a World Cup and I see the Uganda Cranes as a great opportunity. The World Cup is at the very end of my contract," he said. 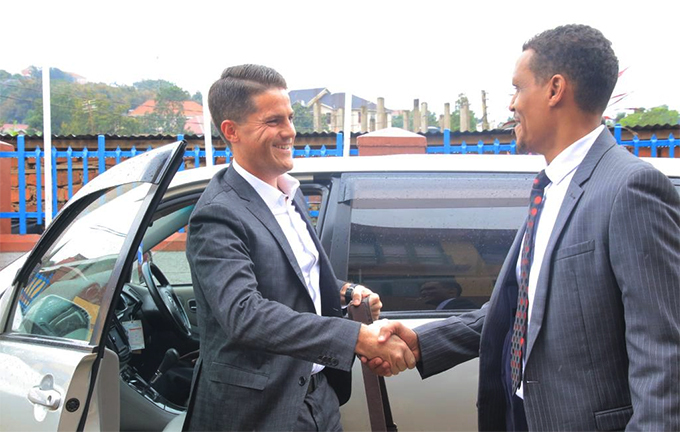 McKinstry is welcomed to FUFA House for his unveiling by Edgar Watson. Courtesy Photo

Speaking at the unveiling, FUFA CEO Edgar Watson said 137 people submitted applications for the job and that McKinstry was selected during a FUFA executive meeting last Friday.

Recent reports indicated that McKinstry was in the running for the job with Belgians Hugo Broos who guided Cameroon to the AFCON title in 2017 and Luc Eymael who was appointed the head coach of Black Leopards in South Africa.

He became the youngest international manager in the world at 27 years old while coaching Sierra Leone before having a stint with Rwanda's national team from 2015.