PORT LOUIS | There had been an ubiquitous sense of inevitability that the best teams of the two groups of the COSAFA U17 Girls' Championship would be the ones to battle it out for the top honours. But it was not immediately obvious who, between Uganda and South Africa, would go all the way to claim the inaugural title.

Starting off the campaign with a 1-1 draw against Zambia nine days ago, Uganda, playing as the guest nation in this southern African competition, did not provide enough conviction to warrant them the credentials of the team to beat.

On the other hand, South Africa came into this competition with a huge favourites tag emblazoned all over them - for everyone to see. And a 28-0 walloping of minnows Seychelles in their opening game did well to illustrate just how close to accurate this narrative was.

But two remaining group games, a semi-final and a final later, it is clear who the real team to beat was - Uganda.

The East African nation scored a late winner against the Bantwana on the artificial turf of St. François Xavier Stadium on Sunday to all but clinch the maiden title of a competition that has, on the evidence of the last nine days of action, laid a firm foundation for a new chapter in African women's football. 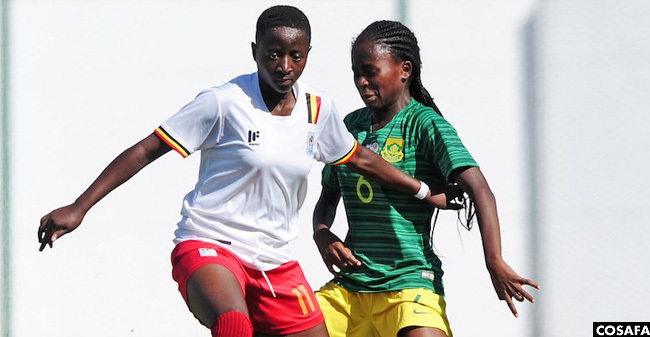 After a lacklustre opening half, Uganda were much brighter in the second half

After a splendid but exhausting campaign for 16-year-old striker Juliet Nalukenge, the Ugandan skipper, who has scored a table-topping 18 goals in the campaign, received the Golden Boot award during the awards ceremony after the final.

Her teammate and goalkeeper, Daphine Nyayenga, received the Golden Glove award, recognised for her solidity in between the goal posts. She conceded only two goals in the entire competition.

One of those goals that Nyayenga let slip through was against Zambia while the second came against a resilient South Africa. There was hardly anything the 15-year-old could have done to keep out the fierce header by the industrious Tiffany Kortjie in the 74th minute.

Moments before this goal, the South Africans were chasing a leveler after going a goal down. Fauzia Najjemba had put Ayub Khalifa's side in front with a brilliantly worked goal 11 minutes into the second half after a goalless opening half. So-called 'Silent Assassin' Nalukenge won the ball in the midfield, turned beautifully to thread a pass to an onrushing Najjemba, who deliciously slotted home past the advancing South African keeper, Karabo Mohale.

But as the action approached its final 15 minutes, Uganda failed to deal with the pace and strength of Nabeelah Galant deep on the right flank, allowing her to whip into the box a cross that found Tiffany's head. It was a tight contest, which saw first half end goalless

At 1-1, the contest was headed for the first penalty shootout of the competition, but that probability was soon thrust out of the window - inevitably by an unmarked Nalukenge - in the 86th minute when the top scorer of the campaign tapped home past a flat-footed Mohale.

The South African goalstopper will have been particularly disappointed, particularly after her heroic saves deep in the first half had kept her side in the game. One of these saves involved her sticking out her leg in acrobatic fashion to keep out Nalukenge's close-range strike in the 35th minute, after the Ugandan forward slalomed past two minders in the box.

Mohale was again drawn into another fine save when she had to come all out to collect the ball she had just spilled from a heavy goal-bound shot.

In a frantic final minutes before the break, the South African number one once again acrobatically stopped Nalukenge's point-blank range effort after the ball had struck the bar to land back in play to Shakira Nyinagahirwa, who headed it in the path of her poaching teammate.

After such outstanding saves, Mohale will have felt hard done by when she conceded late on.

In a tense finale that had four minutes added, Uganda held on to claim a historic title, with an enviable record of being unbeaten, on top of a whooping 46 goals scored against two conceded in their five games. 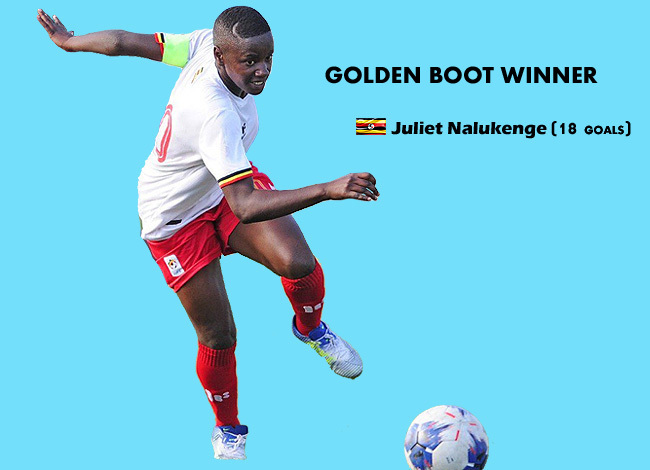 'A horrible first half'

Against South Africa, Uganda started off pale, lacking invention and doing more defending than attacking. They allowed the Bantwana to boss the midfield and peg them in their own half, with the likes of Nalukenge left forlorn upfront.

And by coach Khalifa's own admission after the game, his side were "horrible in the first half".

"They overpowered our midfield, so we had to bring in more midfielders," said Khalifa, who is also the coach of four-time FUFA Women Elite League winners Kawempe Muslim Ladies. The plan worked out well. His side returned from the break brighter and with an attacking dimension, ever pressing forward.

After cutting a figure of restlessness and animation on the sidelines for the entire game, barking out instructions to his on-field troops, the Ugandan tactician will have been delighted by his side's production on the day as well as across the whole tournament.

"I am short of words. I am grateful to the Almighty. We put this trophy into God's hands. I thank the organisers for inviting us," he said after the game. "Most of the girls were coming from the schools championships, so they were still fresh and fit. We are ready for more such invitations." 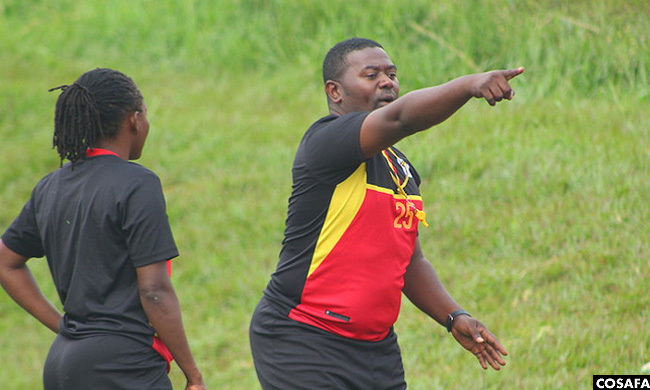 Ayub Khalifa has guided Uganda to a historic title

On the performance of the COSAFA teams, Khalifa said: "I have seen there are some teams still down. They need to do a lot of work to reach the level of South Afrca, who are playing very good."

On Najjemba and captain Nalukenge: "They are pillars of their teams back in Uganda. So we knew we would score against South Africa. We had to."

Khalifa's opposite of the day, Simphiwe Dludlu, hailed her team for showing a "fighting spirit".

"We have had the heart to go and compete. The girls gave their best," she said, adding that their participation is a stepping stone - "a begining point for us".

"Endurance-wise, the tournament took its toll on the team. But the girls fought until the very last minute," added the South African coach.

Meanwhile, in the race for third place, Zambia beat Botswana 3-0 in the earlier kickoff to secure bronze. Precious Nsama opened the scoring in the 27th minute. Shelly Masumo made it two in the 65th minute, before Maweta Chilenga eliminated any doubt of Zambia's third place finish with an 86th-minute strike.

Botswana did not exit empty-handed. They received the Fair Play Award.

South Africa's captain, Jessica Wade, was named Player of the Tournament. The midfielder scored four goals in the tournament.