FIFA agrees limits to player loans and age...
Next Story

Fauzia Najjemba hits six goals in Uganda's latest rampant production in Mauritius, this time against a lethargic Botswanan side, to set up a final date with South Africa.

Unstoppable Uganda eased past Botswana on Friday to cruise to the final. (Photo credit: COSAFA)

Fauzia Najjemba hits six goals in Uganda's latest rampant production in Mauritius, this time against a lethargic Botswanan side, to set up a final date with South Africa.


PORT LOUIS - What a comfortable way to ease into the final of the inaugural 2019 COSAFA Women's U17 Championship!

Guest nation Uganda have yet again proven they are the team to beat, with only South Africa standing between them and the maiden title. Both sides are unbeaten thus far, so their meeting on Sunday will provide the perfect conclusion befitting a competition still in its infancy.

Botswana will face off against Zambia in the third-place play-off in the earlier kickoff of the day to determine who takes the third and fourth spots.

Uganda have faced little resistance en route to the final, with only Zambia holding them in their opening game, which ended 1-1. But their subsequent duels against hosts Mauritius and Comoros helped underline the East African side's potency as well as sound a warning signal to their upcoming opponents.

Against Botswana on Friday at St. Francois Xavier, Margaret Kunihira, for a third successive time, scored Uganda's opening goal, this time doing so in the sixth minute to take her campaign's tally up to seven goals.

Uganda's skipper Juliet Nalukenge, almost inevitably, got onto the score sheet 14 minutes into the game with a superb strike, before adding another in the 25th minute.

Najjemba completed her hattrick soon after restart, with Nalukenge replicating her teammate's production as Uganda sailed farther out of sight.

Kunihira joined the hattrick party with Uganda's ninth goal as early as the 58th minute.

Najjemba was back on the score sheet, hitting her fourth and fifth of the day as the East Africans ran riot. 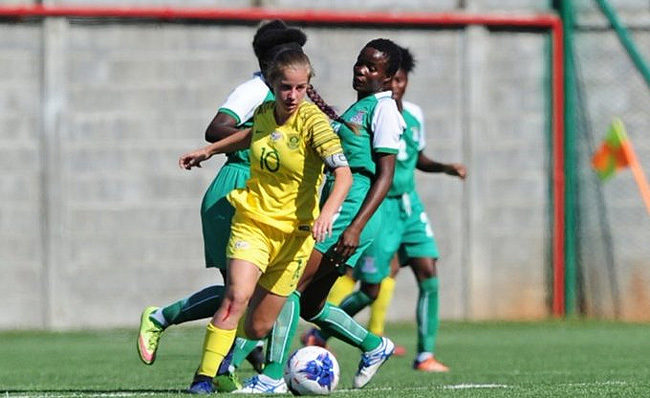 With eight minutes left on the referee's watch, Najjemba wrapped up yet another huge victory for Uganda with her sixth goal of the day and Uganda's 12th, with Botswana having no sniff of goal.

Altogether, Uganda have scored 44 goals in four games so far.

They started off with a draw against Zambia in Group A, before brushing up their scoring boots to produce a chest-thumping 11-0 victorious performance against hosts Mauritius.

Khalifa's side followed up that huge win two days later with another even bigger one - a 20-0 pounding of Comoros to storm the semi-final.

Another comfortable victory over Botswana sealed Uganda's spot in the final to face South Africa, who beat Zambia 2-1 in the other semi-final.

With one game left to wrap up the tournament, Nalukenge remains at the dizzying summit of the goals chart - with a whooping 17 goals. Najjemba, who was in fine goal-scoring form against Botswana, has an equally impressive 12 in the bag and Kunihira with nine. 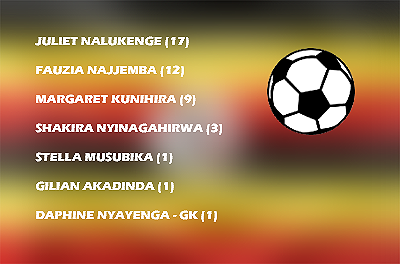