President Museveni and Chinese Ambassador Zheng Zhuqiang make a toast during celebrations to mark the 70th anniversary of the founding of the Peoples Republic of China at Hotel Africana. PPU Photo

President Yoweri Museveni has commended the Government of China for supporting Uganda in infrastructure development including railway transport, electricity generation, road construction and telecommunications, among others.

"Rail transport is much cheaper compared to road transport. The Government of China has been helping Uganda in the development of this area," he said.

The President made the remarks on Tuesday evening at celebrations marking the 70th anniversary of the founding of the People's Republic of China at Hotel African in Kampala where he was the chief guest.

Referring to his recent visit to China, President Museveni said that the Memorandum of Understanding that he signed with his Chinese counterpart is meant to intensify the relationship between the two countries. 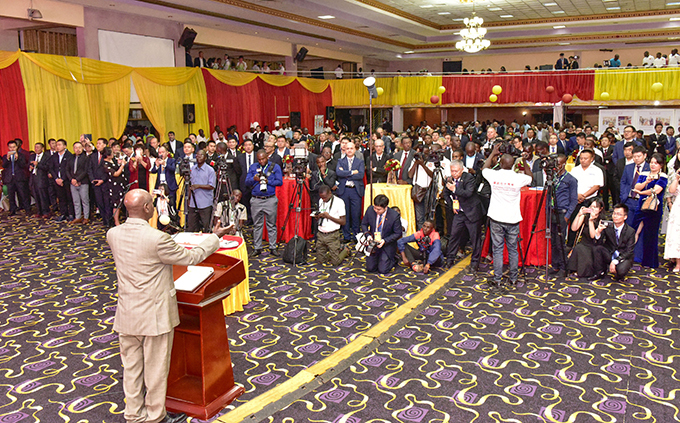 President Museveni addresses members of the Chinese community in Uganda and other invited guests during the celebrations. PPU Photo

"When I was in China recently, I signed an MoU with the Chinese president to intensify the relationship between Uganda and China as they are Uganda's genuine friends," he said.

Museveni commended the Communist Party and Government of China for not only fighting against colonialism, contributing to the liberation of African countries but also for helping in the improvement of the economies of Africa and supporting the continent's prosperity through trade in an effort to assist Africa to build a strong economic base.

Museveni praised China for the rapid development achieved in the past 70 years adding that it used to be in the 45th position of the world's strongest economies but is now the second-biggest economy after the US and that its economy is still growing. 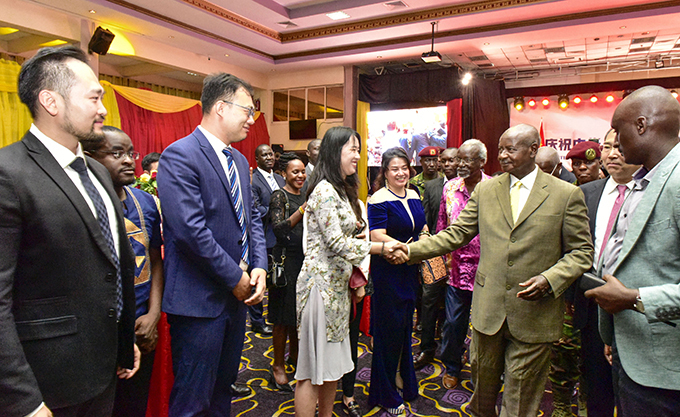 President Museveni interacts with members of the Chinese community in Uganda during the celebrations. PPU Photo

Museveni used the occasion to salute African countries for reviving the Continental Free Trade Area and noted that this will boost and further the linkages between the economies of Africa, China and other parts of the world.

On his part, the Chinese Ambassador to Uganda Zheng Zhuqiang, revealed that China's GDP has increased by more than 450 times.

Zhuqiang reaffirmed China's readiness to strengthen people to people exchanges with Uganda focusing on the youth, women and the media among others.

He also reported that over 100 Ugandan students so far have been granted Chinese government scholarships to study in China this year.