Uganda storm to the semifinals of the 2019 COSAFA Women's U17 Championship after an easy massive win over a hapless Comoros side.

Uganda have scored 32 goals and conceded only once in three matches so far. (Photo credit: COSAFA)

Uganda storm to the semifinals of the 2019 COSAFA Women's U17 Championship after an easy massive win over a hapless Comoros side.

BELLE VUE HAREL - It was an embarrassment of riches for Uganda as they stormed the semifinals of the 2019 COSAFA Women's U17 Championship after brushing aside a toothless, fragile Comoros with the second-biggest win of the campaign so far.

Captain Juliet Nalukenge was once again in fine goal-scoring form as she netted seven of Uganda's 20 goals of the day. That lifted the player-of-the-match's tally up to 14 goals, consolidating her spot as the overall leading scorer.

Gilian Akadinda was also on the scoresheet in a memorable win for coach Ayub Khalifa's side.

After getting their campaign off to a lacklustre start with a 1-1 draw Zambia on Friday, the Ugandan girls soon discovered their mojo. An 11-0 victory over hosts Mauritius two days later underlined their credentials in the competition.

Playing as the guest nation of the southern African region competition, the East Africans advanced to the semifinal stage with a swagger of a pompous queen by brushing aside a poor Comoros.

Khalifa's side were two goals up by the third minute of the game through quick-fire goals by Margret Kunihira.

Captain Juliet Nalukenge scored her eighth goal of the campaign from the spot in the 10th minute, before making life even harder for their opponents with another strike to establish a four-goal gulf. 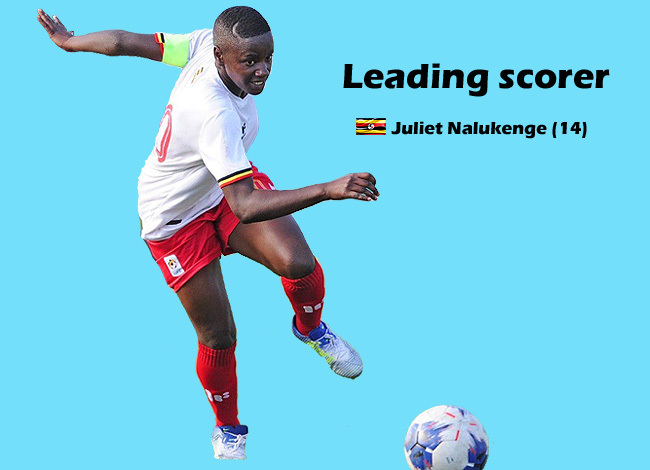 Kunihira completed her hattrick half-way into the first half, before scoring her fourth of the day in the 25th minute. A minute later, Uganda's skipper Nalukenge proved she is made for the goals when she, too, clinched her hattrick to put Uganda firmly in control.

Her fourth goal came just after the half-hour mark against a toothless Comoros.

Just like they were against Mauritius, Uganda were yet again unstoppable, peppering their opponent's final third with goals. Shakira Nyinagahirwa was just in time to join the goal fest with her first of the tournament, delivering the strike hardly a minute after her captain's goal.

Nalukenge made it 10 goals ten minutes to half-time, before Nyinagahirwa scored twice to complete her hattrick.

Gilian Akadinda also hopped onto the wagon one minute before half time as Fauzia Najjemba sealed Comoros' opening half agony with a stoppage time strike.

After the interval, Nalukenge took her campaign tally to a dizzying 13 goals, nine minutes into the second stanza.

East African guest nation #Uganda 🇺🇬 and #Zambia 🇿🇲 sealed their places in the semifinals of the 2019 COSAFA Women's Under-17 Championship with emphatic victories in the final round of Group A matches on Tuesday. https://t.co/v1QkQXukQG pic.twitter.com/AJcD12W7g5

Gulu gets sh2.5bn for road projects