“Poor waste management is responsible for several communicable and non-communicable diseases like Cholera. So people should dispose waste at the right places for easy management and ultimately avoidance of the cholera catastrophe,”

“Poor waste management is responsible for several communicable and non-communicable diseases like Cholera. So people should dispose waste at the right places for easy management and ultimately avoidance of the cholera catastrophe,”

Kampala Capital City Authority(KCCA) and Enabel officials, have expressed need for Kampala residents to enforce hygiene and sanitation in their everyday activities in order to curb disease outbreaks.

The call was made recently during a cleanup exercise at the old taxi park. The cleanup was organized in commemoration of this year's World Cleanup Day, a global social civic action day which brings people all over the world to rid the world of trash.

Enabel, is a Belgium development agency that deals in skills development.

During the cleanup day, Christelle Jocquet, the resident representative of Enabel said diseases like cholera and Diarrhoea are caused as a result of poor hygiene something than can be controlled once handled properly.

"Poor waste management is responsible for several communicable and non-communicable diseases like Cholera. So people should dispose waste at the right places for easy management and ultimately avoidance of the cholera catastrophe," Jocquet said.

She decried the rampant improper waste disposal including littering as a serious environmental and public health threat.

"Mismanaged waste also ends up in waterways and is eventually carried into water bodies when it rains. This contaminates our lakes and rivers making the water unsafe for human and aquatic life moreover people continue to use it. It is estimated that 80% of waste floating in water bodies worldwide is managed waste," Jocquet added.

Last month, the Uganda National Meteorological Authority announced that more rains should be expected till December. 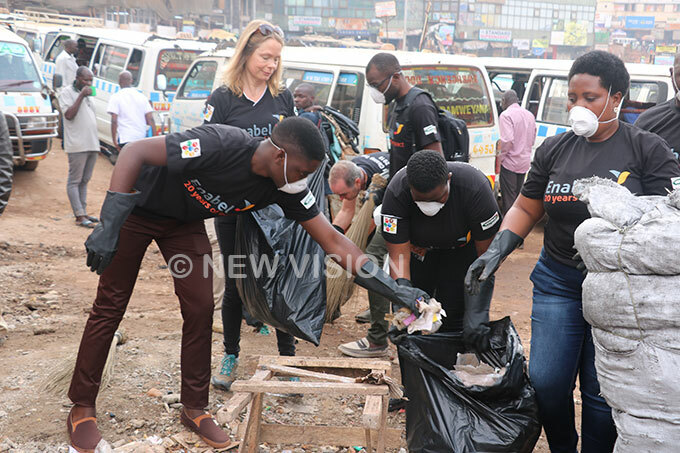 Jude Zziwa, a KCCA waste and sanitation manager, said the authority has over the years undertaken various measures to keep the city clean by putting up waste disposal points.

"Rubbish is one of the problems affecting the city, despite efforts to keep Kampala clean, the population has continued to litter yet every citizen wants to live in a safe and clean city. We advise people to start collecting the rubbish for reprocessing to get other valuables like crafts for sell," he said.

William Yeka, a communication officer said that cleanup day is the responsibility of each and every citizen and should take place every day of the year.

During the cleanup day, taxi drivers and conductors worked together with Enabel officials and swept the park, cleaned up drainage channels and collected all the rubbish in the park.

"We thank these people for coming but they should be doing it every day, sometimes KCCA takes long to come and pick the rubbish. We are happy they have closed the well in the park where people making juice would pick water and cause typhoid to the public," said Ali Ssebatya, a driver, at the Natete stage.

"Cleaning is good, sometimes we come in the morning when the park is littered with human waste, during the day, flies and stench emerge from heaps of uncollected decomposing waste. When it rains, people open their sewerage," said Michael Mukwaya, a conductor at the Entebbe stage.

The sanitation crisis in the city undermines the realisation of Sustainable Development Goal 6 for provision of clean water and sanitation.