Klopp braces for test from 'exciting' Chel...
Next Story

Namuyanja on Saturday lost two games and won two in their league fixture against Ntinda Giants in Ntinda.

A frustrated Namuyanja after the game. PHOTO: Johnson Were

Namuyanja on Saturday lost two games and won two in their league fixture against Ntinda Giants in Ntinda.

Women Pool League results
Ntinda Giants 7 Kampala Central 13
Mbale 8 Eden yard 12
Ronz. 11 Scrap Buyers 9
Atagenda 7 Ibanda Warriors13
National seed two female player Victoria Namuyanja has admitted that she needs to step up her game if she is to contest for the Nile Special USPA Female Pool Player of the Year.
Namuyanja on Saturday lost two games and won two in their league fixture against Ntinda Giants in Ntinda.
"We took a long time without playing and I have to admit, I am not in my best form. Today I lost two games, but I'm going back to the train and see how I can improve," Namuyanja said.
Meanwhile, team Lydia Ayebazibwe lived by example when she won all her four games to inspire her side Kampala Central Pool Club to 13-7 victory over hosts Ntinda Giants in the Women Pool League Game at Rock Catalina Bar in Ntinda on Saturday. 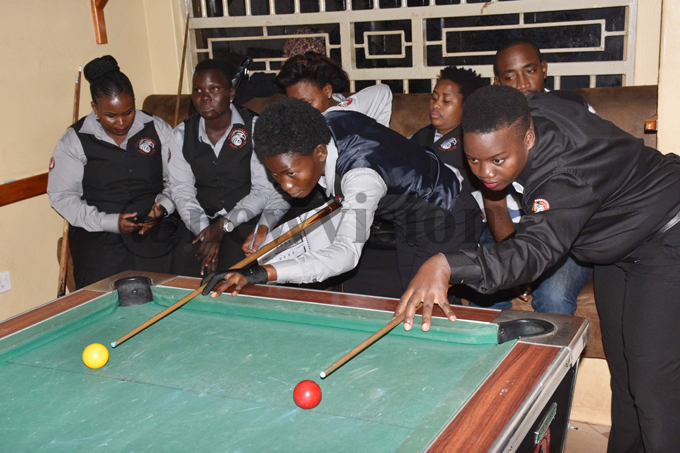 Namuyanja in black with Prossy Namuli who beat her during the league game at Rock Catalina. PHOTO: Johnson Were

The win moved Kampala Central to the top position with 11 points displacing star-studded Uppa Volta who were on top with 10 points.
The highly contested game also saw Prossy Namuli of Ntinda beat Victoria Namuyanja in the last game to deny the visitors a bonus point.
Ayabazibwe also lauded her girls for the good show on away table saying that failing to get abonus should not bother them much.
"It is unfortunate we did not get a bonus point, but we are happy today's win has taken us on top of the table standing," Ayabazibwe said.
"We are going to train harder, correct our mistakes as we wait for the Saturday game in which we host Uppa Volta," she added.
Meanwhile, in the other games, Atagenda lost 13-17 to Ibanda Warriors, Eden Yard beat Mbale 12-8 while Jinja based club Ronz defeated Scrap Buyers.

Africa should try to win the World Cup