Klopp braces for test from 'exciting' Chel...
Next Story

Juliet Nalukenge climbs to the top of the scoring charts after finding the net six times as Uganda's women's under-17 football side punish host nation Mauritius in Port Louis.

Uganda's coach Ayub Khalifa will have been pleased with his side's dominant performance against Mauritius on Sunday. (Photo source: COSAFA)

Juliet Nalukenge climbs to the top of the scoring charts after finding the net six times as Uganda's women's under-17 football side punish host nation Mauritius in Port Louis.

Uganda are taking part in the southern African region competition as the guest nation, but the manner in which they shred the hosts to pieces on Sunday provided a good measure of evidence that they are in it not just for formality's sake.

Coach Ayub Khalifa watched his side send out a bold message to the seven other competing teams that they are keen on going all the way to the final day - and claim the maiden title.

Uganda's first win of the tournament following their opening 1-1 draw against Zambia on Friday is the third-highest-scoring game of this edition thus far, following South Africa's 28-0 thrashing of Seychelles on Saturday and Zambia's 15-0 victory over Comoros earlier on Sunday.

With 68 goals scored across the first six games so far, scouts will have every reason to pay closer attention to the competition. 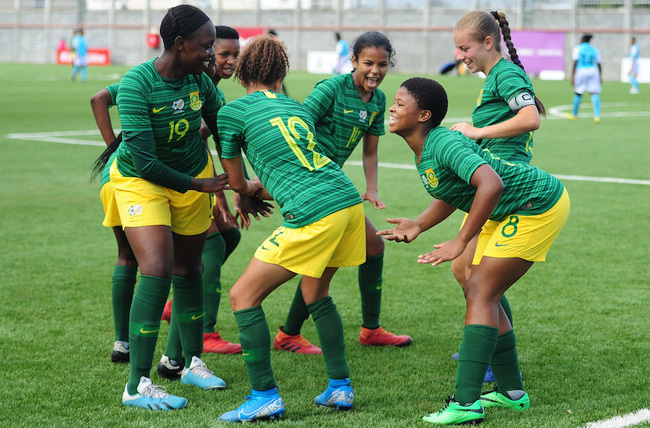 South Africa were too strong for Seychelles, hitting the islanders 28-0 on Saturday. (Photo source: COSAFA)

Uganda too good for Mauritius

The hosts came into Sunday's game oozing plenty of confidence, buoyed by their Group A opening 5-1 victory over Comoros on Friday.

But a rude awakening against Uganda gave the Indian Ocean islanders plenty of thinking to do as they fell behind as early as the first minute when Margret Kunihira got the East Africans off to a flying start inside St. François Xavier Stadium in Port Louis.

Nalukenge made it two four minutes later to establish a one-sided pattern.

Stella Musubika put Uganda in better control with a third goal 14 minutes into the game, before Mauritius' first shot came in the 27th minute - although it was wide of the mark. A minute later though, the hosts trailed further when Fauzia Najjemba made it four, before Nalukenge extended the visitors' lead with her second of the day 10 minutes to the break.

The Ugandan skipper completed her hattrick four minutes into the second half, before scoring yet again to fire Khalifa's rampant side seven goals up against a non-responsive Mauritian side.

It continued to rain goals in Maritian keeper Brasse's net as Uganda even afforded the luxury to let goalkeeper Daphine Nyayenga take their 53rd-minute penalty, the goal-stopper making no mistake. 8-0 at this point of the game!

Meanwhile, Nalukenge was not done yet. She heaped her goals bag with her fifth of the day - and Uganda's ninth - just after the hour mark.

Najjemba sealed her brace 24 minutes before time to pile more misery on Mauritius, as Nalukenge completed the rout with another goal to seal a massive victory for the guest side.

With 6 goals, 🇺🇬 Nalukenje Juliet takes the player of the match shield.


With the player of the match shield going to her, the Ugandan skipper is now the leading goalscorer of the tournament with seven goals, having netted Uganda's only goal against Zambia.

The top two teams in the two groups (A and B) will progress to the semi-final stage. As it stands, Zambia lead Group A ahead of Uganda on goal difference. Mauritius are third while Comoros, with two defeats in two games, are rock-bottom.

In Group B, pre-tournament favourites South Africa are top, thanks to that mind-blowing 28-0 result against Seychelles. Botswana, who beat Madagascar 6-0, are second while the latter remain in third.

Group B action continues Monday, with South Africa taking on Botswana while Seychelles and Madagascar will look to collect their first point(s) of the campaign.

Uganda will be back in action on Tuesday against Comoros at Anjay Stadium in Belle Vue Harel as Zambia face off against Mauritius in Port Loius the same day.