The deceased was identified as Abdu Yiga a welder, who died on the spot

One of the workers in the shop only identified as Kajubi who had his foot shattered in the explosion at Mulago Hospital before he underwent emergency surgery. Photo by Wasswa Ssentongo

The deceased was identified as Abdu Yiga a welder, who died on the spot

The Police has confirmed that one person died and nine others were injured in an explosion at Matugga on Kampala-Gulu Highway.

The deadly incident occurred at 3:00 pm on Saturday at a shop owned by Frank Ssewakiryanga who deals in metallic scrap. 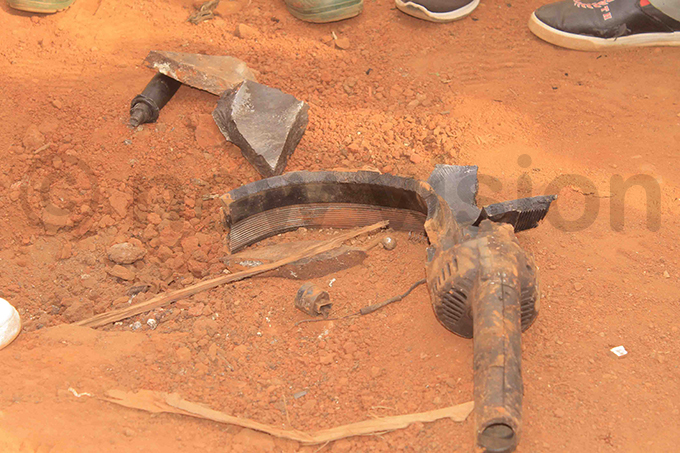 Some of the metal fragments from the device which exploded. Photo by Wasswa Ssentongo

One of the employees at Ssewakiryanga's shop only identified as Mugisha, who witnessed the incident, described the exploded item as a part of a machine while security personnel at the scene said it was a bomb.

"This machine has been here for two weeks. Someone whose names I did not get brought it for sale. Because it was so heavy, over 200 kg, we asked a welder to cut it into pieces so that we would be able to put it on a weighing scale. The moment he started cutting, we heard a loud explosion and a fire started," narrated Mugisha A security officer takes Rogers Matovu, one of the workers at the shop who was injured, to an ambulance at the scene. Photo by Wasswa Ssentongo

The Internal Security Officer identified the deceased as Abdu Yiga, the welder, who died on the spot. All the injured are admitted at Mulago Hospital

Why you should go for a medical check up every year