US to continue supporting Uganda through P...
Next Story

According to the Petition it is also provided under the Climate Change Bill that is yet to be debated and approved by Cabinet.

Students of Makerere University match to Uganda Parliament as they hold placards during the Global climate strike on Friday, Sept, 20, 2019. The global climate day of protest is to demand governments take urgent steps to prevent environmental disasters.Photo by Nicholas Kajoba

According to the Petition it is also provided under the Climate Change Bill that is yet to be debated and approved by Cabinet.

KAMPALA - The youth want Parliament to debate the Climate Change bill and pass it into law pointing out that it is one of the ways how violators can be more accountable to Ugandans.

In a two page petition that was handed over to Rebecca Kadaga, the Speaker of Parliament by Edwin Muhumuza, the Chief Executive Officer of the Youth Go Green, the youth also say a fund is needed to address impacts of climate change.

This, according to the Petition it is also provided under the Climate Change Bill that is yet to be debated and approved by Cabinet.

Kadaga said she was going to ensure that the Finance Ministry processes the Tree Fund so that tree planting restores the environment.

The youth say the changing climate is making agriculture a highly risky venture and because of this the youth are selling their land.

They say some of them are selling land to invest in boda-bodas (motorcycles) that ply trading centers and cities including Kampala and also seek jobs abroad. 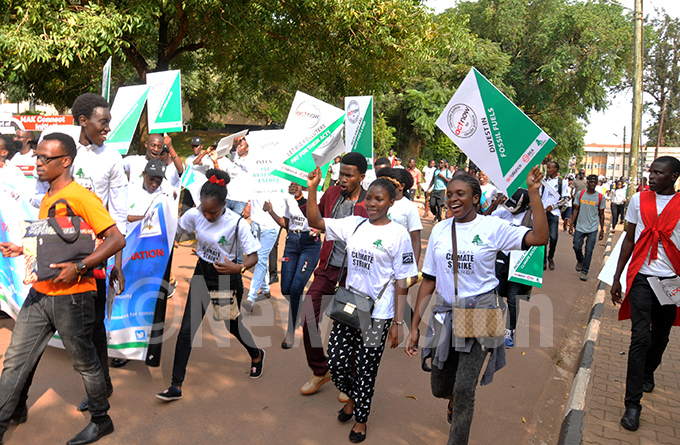 Students of Makerere University match to Uganda Parliament as they hold placards during the Global climate strike on Friday, September, 20, 2019.Photo by Nicholas Kajoba

This was blamed on extreme weather and unpredictable seasons that are frequent and severe, affecting the way they farm and produce food. "Floods and drought are leaving people hungry," stated the Petition. "The land is less productive; farming is difficult, unproductive and reliable."

The Petition pointed out that not acting on climate change is a violation of human rights now and in the future. "Uganda is a known champion of climate justice,' the petition added.

The country's international commitments such as under the United Nations Framework Convention on Climate Change, the Kyoto Protocol and the Paris agreement are clear on the government's role in delivering climate justice to the people. Interventions such as environmental laws, Nationally Determined Contributions (NDCs) and the Climate change policy are important.

"But we, young people, need more. In line with international commitments, the Constitution, under Article 39, guarantees the right of every Ugandan to a clean and healthy environment," the youth pointed out.

Therefore, as young people, we demand that: Parliament should pass the Climate Change Bill into law so that people and entities that violate the environment can be better held accountable by ensuring that environmental laws and policies are better implemented.

The youth also want the government to invest in climate action, make sure relevant ministries plan for climate change and receive enough money to implement these plans. They also say a semi-autonomous fund for climate change, will help the population to be better prepared to adapt and mitigate its effect on people.

"Enough money should also be allocated to responding to people affected by climate disasters," the youth demanded.

The youth also want cheap electricity and alternatives such as solar power to be put in place to reduce cutting trees for charcoal and firewood. They condemned the use of plastics in Uganda despite bans in place and the export of charcoal.