15 competitors, who have been unveiled, will enjoy a fully-paid week-long trip to China.

The overall competition winners who will fly to China pose for a photo with Ambassador Zheng and Vision Group CEO Kabushenga. (Credit: Mpalanyi Ssentongo)

15 competitors, who have been unveiled, will enjoy a fully-paid week-long trip to China.


KAMPALA - The China-Uganda relationship is at its best in history, China's ambassador to Uganda Zheng ZhuQiang has said at the unveiling of the overall winners of a three-pronged five-month programme by the Chinese Embassy and Vision Group.

Speaking during an engaging prize-giving ceremony in Kampala on Friday, Ambassador Zheng said bilateral ties between the two countries have been "elevated to a new level".

He said President Yoweri Museveni's trip to China in June last year, where he met his Chinese counterpart Xi Jinping, opened a "new chapter" of their nations' relations.

Zheng was presiding over a function that saw 15 Ugandans win a fully-paid week-long trip to China later this year.

(All photos by Mpalanyi Ssentongo) 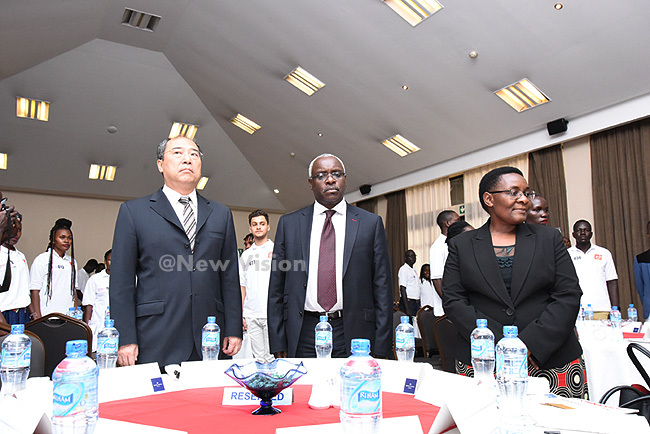 Five of the group were the overall winners of the My China Story Essay Competition. Three reigned supreme in the Up Close to Xi Jinping Thought on Diplomacy quiz and two were lucky winners drawn from a raffle on the night. The remaining five were winners of the Let's Talk Chinese competition.

The three projects, a partnership involving the Chinese Embassy in Uganda and Vision Group, were launched in April.

Makerere University, which is championing the learning of Chinese in Uganda through its Confucius Institute, has also been involved.

Zheng said the competitions have been "huge successes" and thanked Vision Group for its support.

Vision Group chief executive Robert Kabushenga, heaping praise on the Chinese Embassy in Uganda for the initiative, also praised Ambassador Zheng for being "exceptional ever since you arrived in Uganda".

"He has been exemplary in trying to make the Ugandan people understand the Chinese people," he told guests.

Barbara Kaija, Vision Group's Editor-in-Chief, attended the event. In her speech, she thanked all the competitors for their input as well as the Chinese Embassy and Vision Group staff for their involvement. 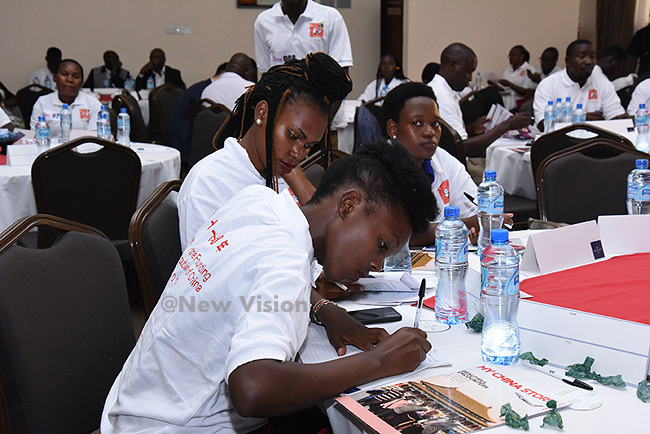 The full-house prize-giving function came on the heels of the 70th anniversary of the founding of the People's Republic of China, which is due on October 1.

China is the biggest developing country in the world and according to Zheng, it is "playing a more important role in the international affairs".

On the Xi Jinping Thought on Diplomacy, the ambassador said the speeches of President Xi "enable Ugandan friends to have a better understanding of China's foreign policy".

"All these make the quiz and the essay competition so relevant to Uganda," he said.

Rodney Mukunzi, Kassim Wendi and Teddy Nakabuye Kyambadde won the quiz, which was conducted on the night. Rtd Capt. Benon Tumuhairwe and Innocent Douglas Okwir were the lucky draw winners. 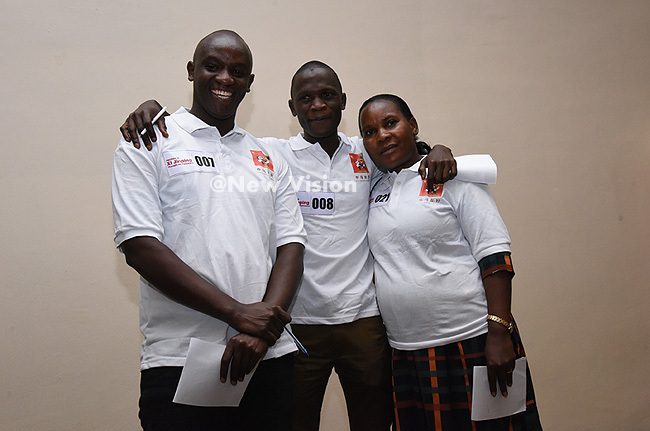 The Chinese Embassy will celebrate the People's Republic of China's 70th anniversary on Tuesday next week - all the 15 winners will be invited to be a part of the function.

"In the past seven decades, China has made tremendous achievements in various fields, which is rarely seen in human history. Seeing is believing. I wish all the winners have a pleasant and unforgettable trip in China, during which you can use your own eyes, ears, hearts and souls to find a true China," said Ambassador Zheng.

"The embassy is committed to working with Vision Group to continue organising more activities to promote the friendship between us and the Comprehensive Partnership between our two countries." 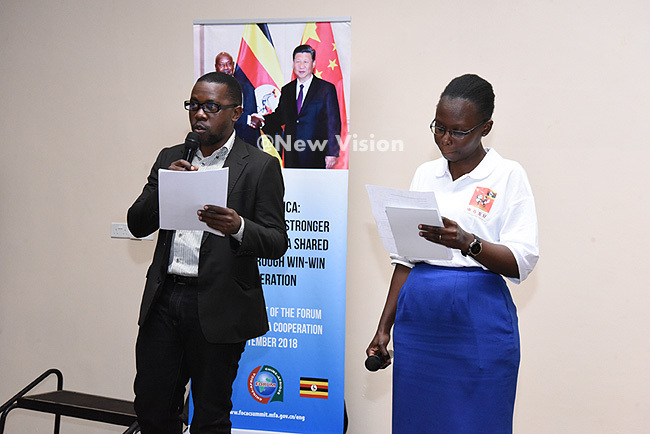 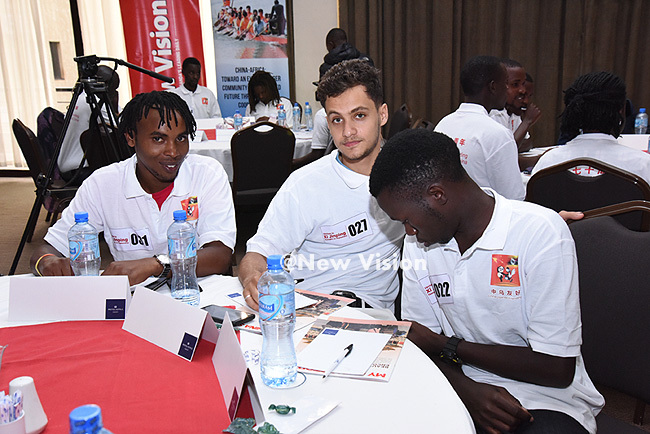 It was a fully attended function in Kampala 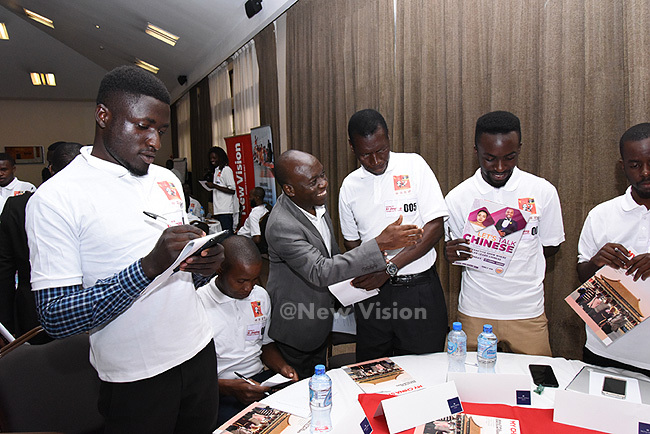 The quiz in session. The best three would win a trip to China 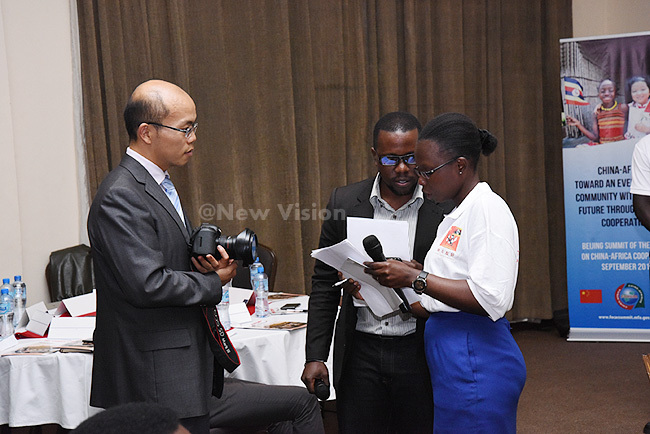 Bwambale and Abo read out question after question 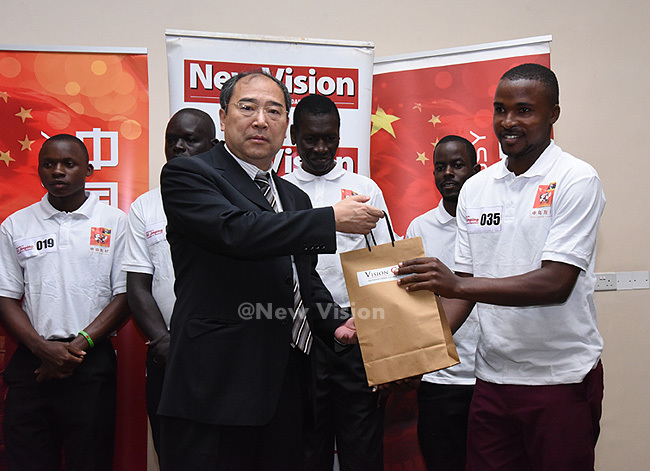 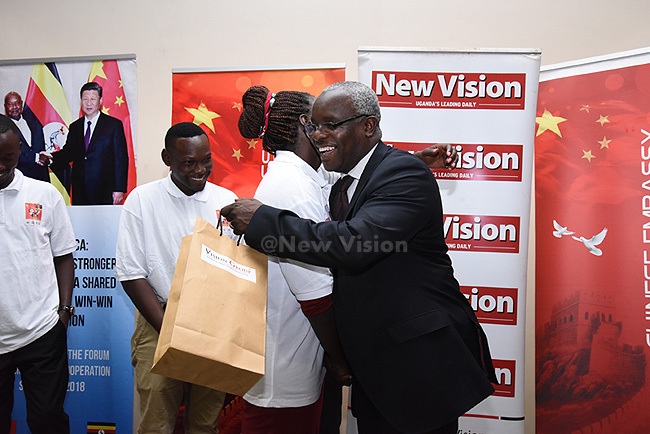 'Congratulations for your achievement!' 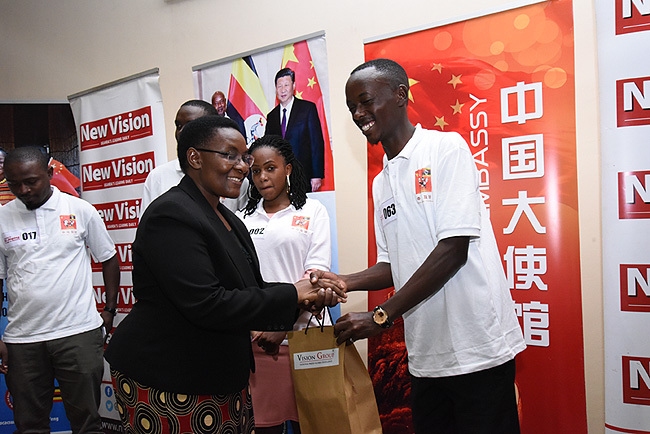 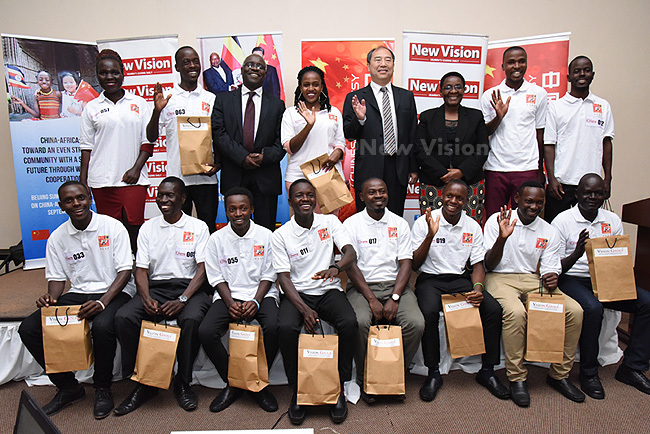 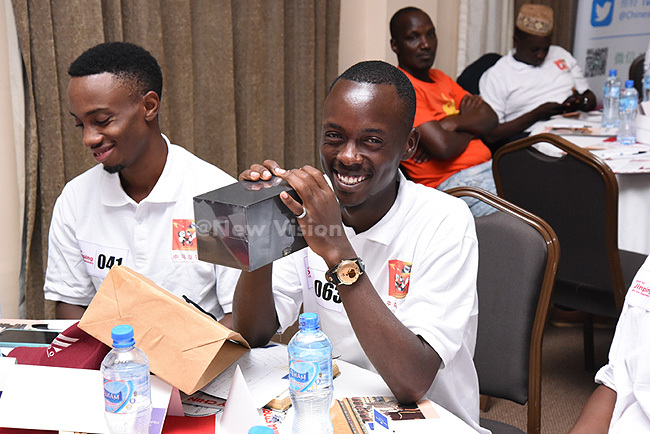 Feeling smart with his brand-new phone :) 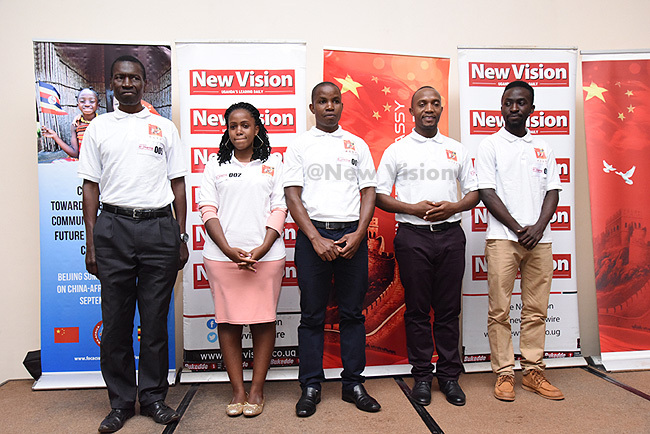 The five overall winners of the My China Story Essay Competition. Their trip to China next up! 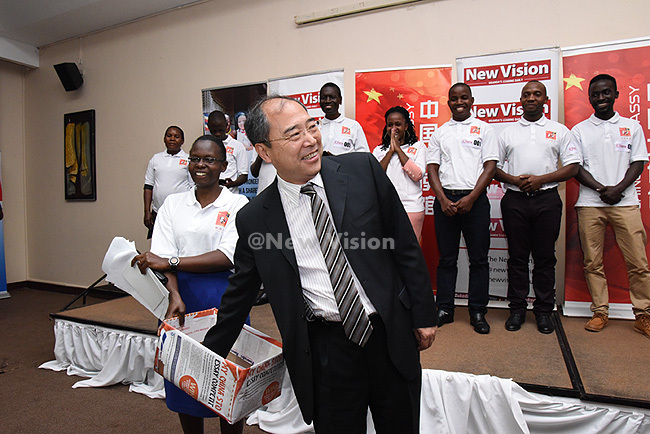 Two lucky winners were picked from a raffle draw 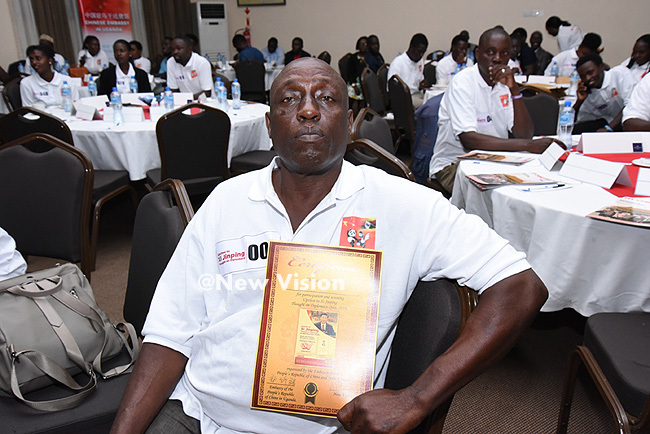 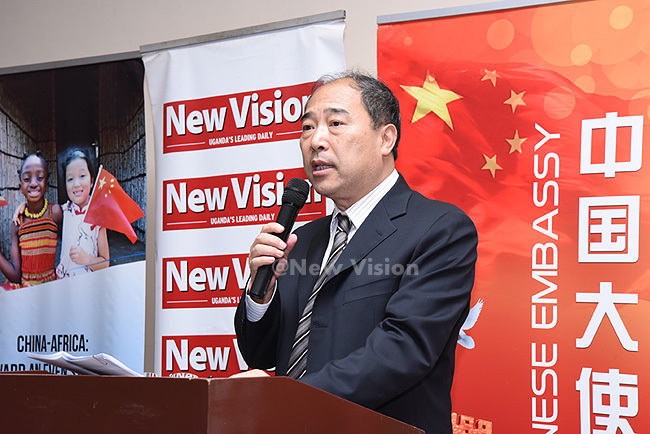 Ambassador Zheng said the competitions were a huge success 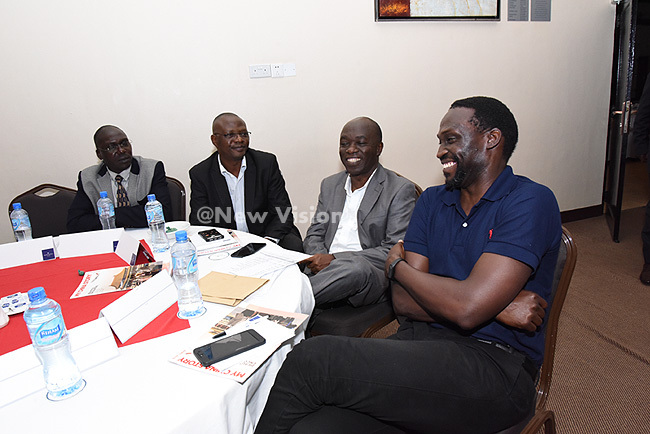 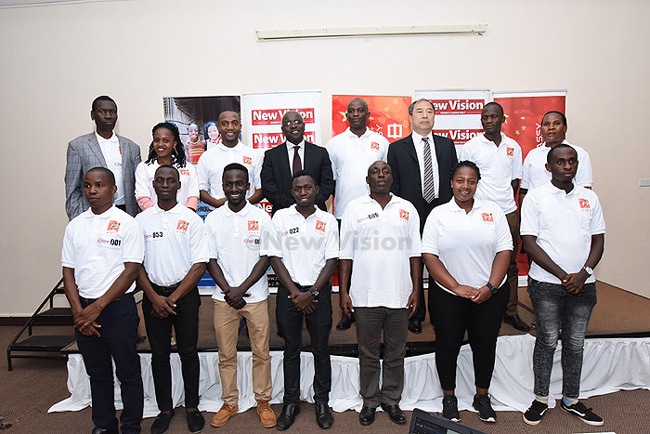 Congratulations to all the overall winners!

hosting the Confucius Institute which is championing the teaching of Chinese in Uganda.