Violence: Ugandans in Canada vow to break ...
Next Story

"The criminals will all be found. We need to work on the courts. They need to move quickly on the cases of murder, rape and terrorism, the big backlog of cases notwithstanding."

"The criminals will all be found. We need to work on the courts. They need to move quickly on the cases of murder, rape and terrorism, the big backlog of cases notwithstanding."

President Yoweri Museveni has spoken out on the recent murders involving social worker Mari Nagirinya and her driver in one incident, and his nephew Joshua Rushegyera in another fatality. In his detailed message, the President has assured that all criminals will be found and be brought to book. He has also taken a swipe at negligent Police officers. He says he has directed that all the officers that failed to respond to the distress call in the Nagirinya incident be "tried, sentenced, punished and dismissed from the Police". 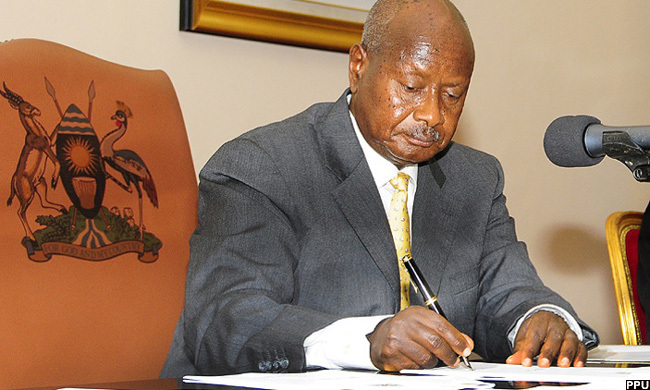 Museveni says anybody who kills people outside war is a pig

Condolences on the killing of the young Bazzukulu Nagirinya and Kitayimbwa by the criminals as the two were at the gate of the former's residence at 23:49 hours on the night of August 28th, 2019.

Also condolences on the murder of Joshua Rushegyera and Tumukunde Merina on the night of 5th of September, 2019 between 22:28 and 23 hours on the Entebbe Expressway. Joshua Rushegyera was my nephew, being a son of my cousin Kyohairwe, who was married to an NRM supporter in Bushenyi by the names of Rushegyera. There have been other killings reported in the Lyantonde area.

As I told you before, these criminals are pigs. Anybody who kills people outside war, is a pig. Moreover, many are stupid. They forget that all crime leaves clues and, eventually, the criminals will be captured. Up to the killing of Kaweesi, Kiggundu and Abiriga, the security infrastructure had lagged behind. You remember after those killings, I presented to Parliament a 10-point anti-crime plan on the 20th of June 2018. Although we have only partially implemented it, many of the killers in recent times have been arrested. The Masaka gang of Kiddawalime was wiped out (killed or arrested), Serugo Paul and his Syndicate in Masaka, Kanyesigye Juilius alias Mwesigye Amon in Rwizi and Kampala and the Usafi mosque criminal syndicate were neutralized. 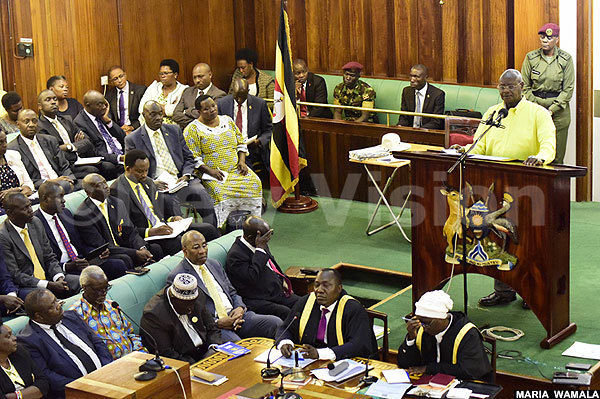 With the modest investments we have made in the anti-crime infrastructure, the criminals are in trouble. Why? They are leaving behind many clues which was not the case before. Secondly, they are helping us to expose the weaknesses of the Police or their allies in the Police.

Take the case of Nagirinya. When she was kidnapped, the relatives, immediately, informed the Police of Kibumbiro Police post at Nateete, by about 00:43 hours. The officer there should have informed all the Police units and patrol cars and the camera centres about the type of car that had been hi-jacked. The cameras then would track that vehicle and those criminals would have been arrested or killed before they abandoned the car at Nateete, after dumping the bodies of the victims in Mukono.

The officer at Kibumbiro Police post- Busega says that she tried to contact the 999 but the 999 was not picking until 00:50 hours. What is this- criminal negligence or collusion? Whatever it was, we are slowly moving forward. On account of the cameras and other technical means, we are now able to know who did not do his work.

The Policemen in the camera centres were asleep, only waking up to "retrieve" pictures from the memory of the cameras. Rubbish. You are not only supposed to retrieve pictures that happened some hours ago. You are supposed to watch live and tell the patrol vehicles to act promptly. All these have been arrested. I have directed that all involved must be tried, sentenced, punished and dismissed from the Police. Moreover, they should never work in any Govt department ever, again. 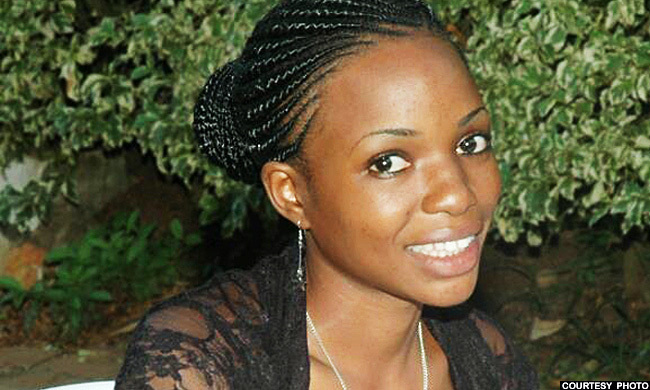 There are many Bazzukulu who are looking for jobs and if those who are in uniform today cannot do their job, there are plenty who will replace them. This is all before we introduce the other measures, such as the digital (electronic) registration of all vehicles and motorcycles so that we electronically track every vehicle. It will tighten the rope around the neck of criminals. Even in the case of Rushegyera and Tumukunde Merina, there are signs of negligence by the Police. I am awaiting details. Criminals always leave clues. With better technology, like what we are acquiring, identification becomes easy. In the USA, as you normally hear, there are mass shootings every other week. However, identification is always fast. That is where we are heading.

You may commit a crime, carelessly taking away the lives of others; however, you will also lose your own life. We need to make this clear to the Courts. It must be an eye for eye. Nothing less will be acceptable to the freedom fighters that I represent and the entirety of the electorate of Uganda that I represent.

Otherwise, using the still incomplete technology of the cameras and other methods, the suspected criminals in the following cases have been arrested and presented to the Courts:

1. The Susan Magara case, 9 suspects have been arrested. They are already in the High Court. Two suspects are known but are still on the run. 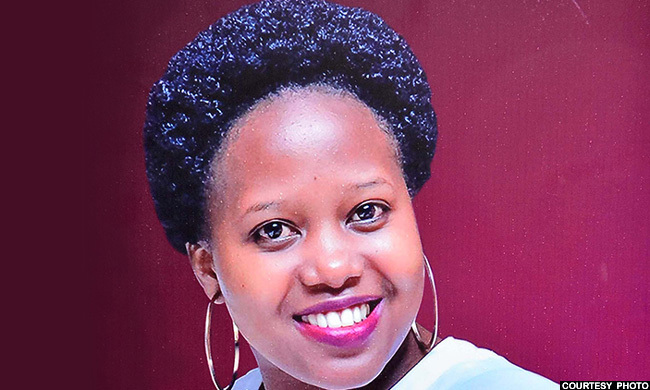 2. In July 2018, robbers attacked Muto Hardware shop in Masaka and robbed Sh. 400m. Two people were shot. A gun from a Reserve Force Personnel was robbed. The gun has been recovered plus 2 other illegal guns from that group. 8 suspects were tried in Court Martial and 3 have so far been convicted to 40 years each. Others are awaiting their sentence.

3. In Ssenge Wakiso, criminals attacked a veteran, Mrs. Bakari; the Police responded to the neighbour's alarm, one robber was shot dead. The Police recovered a telephone hand-set on site. 3 other suspects were arrested. They are in Court.

4. The arrests in the Ssenge, Wakiso case, led to another robbery in Kiboga of Shs. 33million at Bukomero trading centre. Those robbers, were riding on motor-cycles. They tried to escape on motor-cycles. The wanainchi chased them and killed one of them. Another one was injured in the robbery, he could not run and his colleagues killed him so that he is not captured by the Police and reveal information about them. Nevertheless, from the clues left by the criminals, one of them was arrested in Namutumba and another one in Bukomansimbi. The gun they were using was recovered from a hotel in Kiboga. Apparently, these 2 robbers were also linked to the crime in Muto, Masaka.

5. On the 11th of June, 2019, responding to information, the Police recovered 2 guns from Lugala, Masanafu. One person was arrested, but another one ran away. When the guns were taken to scientific analysis, it was found that they had been used in 5 robberies and murders as follows:

6. The case of Kikumbi Zone, Bunamwaya, where a Turkish national was robbed of his medicine bag, thinking that it contained money; 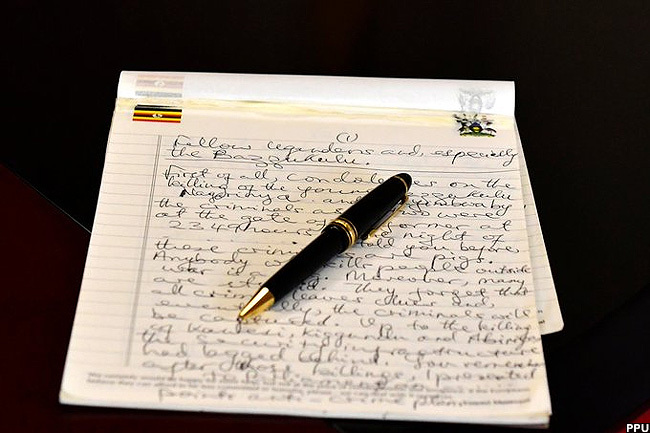 7. On the 14th of May, a mobile money dealer known as Mwesigwa was going home in the area of Kabusu, was robbed of sh. 610,000 and a student of Uganda Martyrs' University was shot dead. The catridges recovered from the scene, matched the gun recovered;

8. On the 17th of May, 2019, a mobile money agent known as Nalukwago Sanyu in Kajjansi C-cell Zone was fired at and they robbed Sh. 18million from her; they had been trailing her using vehicle Toyota Wish Reg. Number UBE 418A;

9. On the 10th of May in Mbale, the Police planned to intercept these criminals; in the process, one Police officer was killed and others were injured; and

10. On the 10th June, 2 young women, Nakabubi and Nalwadda, were killed at Zzana Cell, Ssabagabo. All these were crimes by the group that was using the guns of Lugala, Masanafu. Those that are arrested are Lance Corporal Mubale (formerly of UPDF), Private Anican Bob (formerly of UPDF), Private Mwangusho of UPDF, formerly and Ntale Issa alias Ganja - a boda boda rider.

What is most annoying, is that 3 of these had been soldiers at Kabamba and in 2006, they robbed a car only to find somebody who knew them- whom they decided to kill in order to conceal their crime. They were discovered, tried and sentenced to death by the Court Martial. The Civilian Court reduced the Sentence to only 18 years and, recently, the same Civilian System released them. As a consequence of the actions of those Civilian courts rubbishing the work of the guardians of peace, a total number of 4 Ugandans have died needlessly and the freedom fighters had to, again, burn the midnight candle so as to arrest these killers, again. They are now in the Court- Martial, again.

As I write now, the killers of Nagirinya have all been arrested, including the red-jacketted character,that was driving Nagirinya's car after killing her. 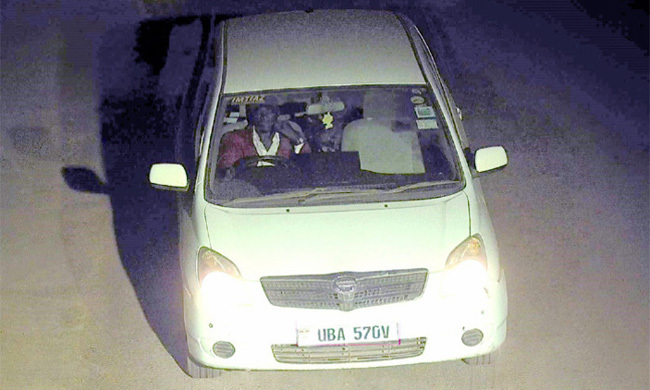 A CCCTV image of the suspected assailant who is seen behind the wheels. (Credit: Uganda Police Force)

Number one, the criminals will all be caught, even the killers of Kagyezi Joan, the Moslem sheikhs etc. It is a matter of time. We have clues on all these.

Secondly, the political leaders must harmonize with the Courts on the issue of the fundamental concept of Justice. The NRM concept, for most of the time, is an eye for an eye; a tooth for a tooth. It is only in politics where we adopted reconciliation as a strategy. Part of the reason for being soft in reconciliation is that we had already punished our opponents seriously in war. It is, therefore, not correct to say that those mistake- makers were not punished. They were punished in the conflict. With peace, it was in the national interest to reconcile. This is totally different from the phenomenon of Civilian Courts condoning, aiding and abetting crime by, contrary to the wishes of the country, exonerating criminals.  This is promoting impunity.

Even in the case of Nagirinya and Kitayimbwa, the police have already made some arrests. The criminals will all be found. We need to work on the courts. They need to move quickly on the cases of murder, rape and terrorism, the big backlog of cases notwithstanding. The punishments must also be severe, including the hanging of Killers.

The NRM always believes in the Law of Moses: An eye for an eye and a tooth for a tooth.

Husband of murdered woman speaks out