MP Among unshaken after being 'trailed'
Next Story

Mugabe expected to be buried next weekend

Presidential spokesman George Charamba says the former leader's body should arrive in Zimbabwe on Wednesday, with an official funeral on Saturday.

Presidential spokesman George Charamba says the former leader's body should arrive in Zimbabwe on Wednesday, with an official funeral on Saturday.

Former Zimbabwe president Robert Mugabe is expected to be buried next weekend after his body is returned from Singapore where he died two days ago, a presidential spokesman has said.

Mugabe, a guerrilla leader who swept to power after Zimbabwe's independence from Britain and went on to rule for 37 years until he was ousted in 2017, died on Friday, aged 95.

Presidential spokesman George Charamba told AFP by text message that his body should arrive in Zimbabwe on Wednesday, with an official funeral on Saturday and the burial the following day.

But the location of the burial was unclear, with Mugabe's family and President Emmerson Mnangagwa's government apparently at odds over whether it would be at his homestead northwest of Harare or at a shrine for liberation heroes in the capital.

Mugabe's nephew said earlier Sunday that a delegation was expected to leave Zimbabwe on Monday to collect the hero-turned-despot's body from Singapore.

His health deteriorated after he was toppled by the military in November 2017, ending his increasingly tyrannical rule. He had been traveling to Singapore for treatment since April.

"I can't give an authoritative day, all I know is people are leaving tomorrow Monday to go and pick up the body," the nephew Leo Mugabe told AFP.

"So assuming they get there on Tuesday and the body is ready, logically you would think they should land here on Wednesday," he said, adding that a list of accompanying family members was being finalised. 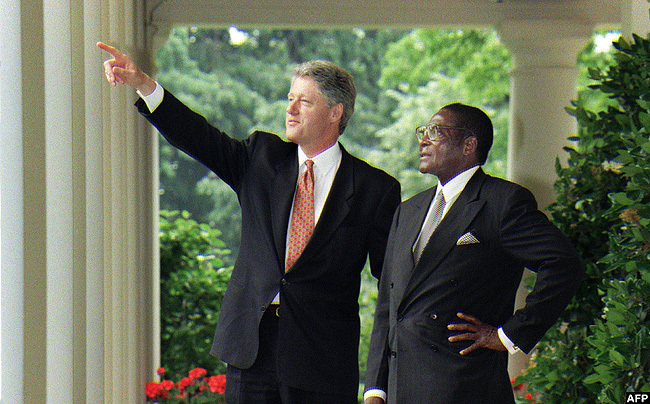 May 18, 1995: US President Bill Clinton with his Zimbabwean counterpart Robert Mugabe at the White House

Once praised as a liberator who rid Zimbabwe of white minority rule, Mugabe soon turned to repression and fear to govern.

He is widely remembered for brutally crushing political dissent and ruining the economy through mismanagement, prompting mixed reactions to his passing.

At Sacred Heart Cathedral, Mugabe's parish in the capital Harare, the priest encouraged congregants to pray for their founding leader.

"I know some of us may have different feelings about it, but it's our duty to pray for one another," Father Justin Jagaja told AFP.

Mnangagwa declared a period of national mourning on Friday, without elaborating. 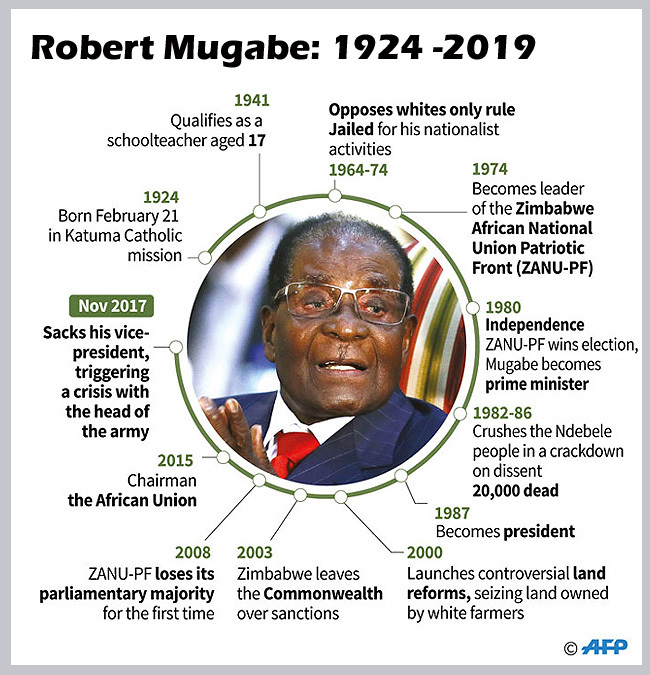 Mugabe's family and Mnangagwa appear to disagree on whether he will be buried in his rural homestead Zvimba, some 100 kilometres (60 miles) away, in a ceremony involving local chiefs, or at the National Heroes Acre -- a hilltop shrine in Harare commemorating guerrillas killed during the liberation struggle.

Tensions have simmered between Mugabe's family and Mnangagwa, a former ally who turned against him when the military helped oust Mugabe in 2017 after his wife Grace appeared to be preparing to succeed him in office.

"No one in the entire village is happy with the way he was treated by being removed from power by Mnangagwa," Mugabe's aunt, Josephine Jaricha, told AFP in the village of Kutama in Zvimba district.

"We want him buried here. Heroes, for what? That is for Mnangagwa not for Mugabe. We want our Mugabe to be buried here," she said when asked about the plan for a Harare burial.

Mugabe "still had his faith even after the frustrations of what happened... the way he was removed from power ," said the vicar general of the Harare archdiocese, Kennedy Muguti.

"He was a disappointed man; he was frustrated, he was angry, but at some time I think he was able to express his faith," Muguti added. 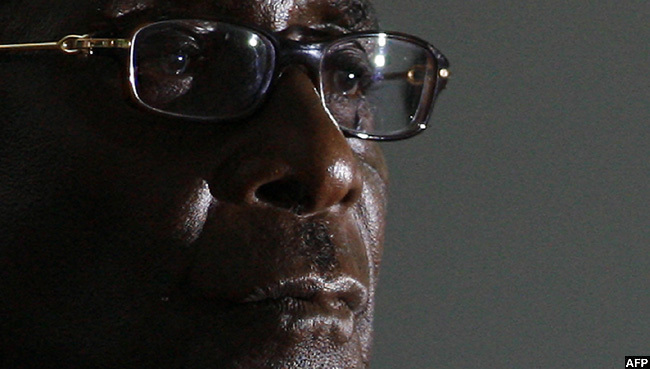 Leo Mugabe refused to comment on the feud over the burial.

"All I know is (that) we are closer to an agreement if the chiefs meet up with the president and discuss the issues," the nephew said.

He said his uncle would have been appointed chief of Zvimba had he not become president.

Presidential spokesman Charamba said the family had still to decide on the burial location.

But Zimbabwe's deputy information minister Energy Mutodi on Saturday said the body would rest in Harare.

He tweeted that Mnangagwa had declared Mugabe a national hero," adding: "The former president will be buried at the national Heroes Acre at a date to be announced."

The 57-acre site, presided over by three bronze statues of guerrilla soldiers, was later opened up to national heroes in the arts and academia.

The family of Zimbabwean Afro-jazz icon and human rights activist Oliver Mtukudzi also refused to bury him at the shrine.

Mtukudzi, who died of diabetes in January, was declared a national hero for his social and political influence.

Why did Mugabe spend his last days in Singapore?