Tullow had been hoping to use the deal to reduce its holding in the undeveloped Lake Albert oil project in Uganda from 33 percent to 11 percent.

Tullow had been hoping to use the deal to reduce its holding in the undeveloped Lake Albert oil project in Uganda from 33 percent to 11 percent.

After negotiating for nearly two years, time has run out for Tullow Oil to complete its sale of shares to Total E&P and China National Offshore Oil Corporation (CNOOC).

Jimmy Mugerwa general manager Tullow Oil Uganda said they had pulled out of the deal and are re-initiating a fresh sales process.

Tullow Oil announced that its farm-down to Total and CNOOC terminated on 29 August 2019, following the expiry of the $900m (sh3.3trillion) Sale and Purchase Agreements (SPAs). Tullow had been hoping to use the deal to reduce its holding in the undeveloped Lake Albert oil project in Uganda from 33 percent to 11 percent.

Tullow has been unable to secure a further extension of the SPAs with its Joint Venture Partners, despite previous extensions to the SPAs having been agreed by all parties. The termination of this transaction is a result of being unable to agree on all aspects of the tax treatment of the transaction with the Government of Uganda which was a condition to completing the SPAs.

While Tullow's capital gains tax position had been agreed as per the group's disclosure in its 2018 full year results, the Ugandan Revenue Authority and the Joint Venture Partners could not agree on the availability of tax relief for the consideration to be paid by Total and CNOOC as buyers.

Mugerwa said Tullow will now initiate a new sales process to reduce its 33.33% operated stake in the Lake Albert project which has over 1.5 billion barrels of discovered recoverable resources and is expected to produce over 230,000 barrels of oil per day at peak production.

The Joint Venture Partners had been targeting a Final Investment Decision for the Uganda development by the end of 2019, but the termination of this transaction is likely to lead to further delay. 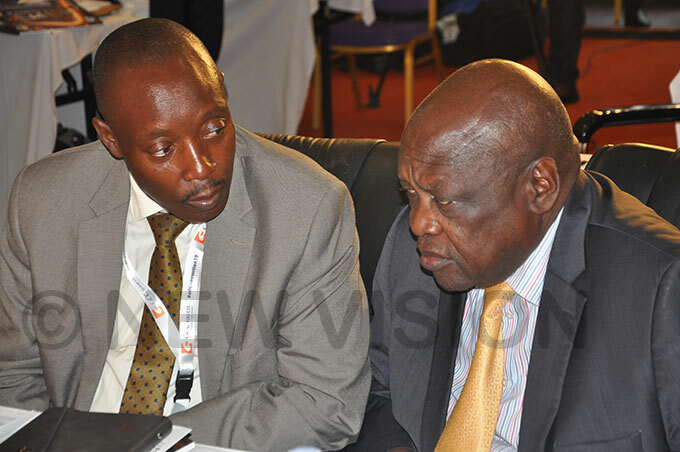 Kasande  and Peter Lokeris, state minister for energy and minerals consult during an Oil and Gas Convention

Under the terms of the agreement, Tullow would have received $100m upon completion, $50m when the final investment decision was made and $50m when the first oil was produced. The remainder would have funded its own costs towards developing the project to produce oil.

Paul McDade, Chief Executive Officer said Tullow had worked tirelessly over the last two and a half years to complete this farm down which was structured to re-invest the proceeds in Uganda.

"While this is a very attractive low-cost development project we remain committed to reducing our operated equity stake. It is disappointing to report this news at a time when we are making so much progress elsewhere towards the growth of the Group with our recent oil discovery in Guyana and the first export of oil from Kenya."

He said Tullow continues to make good progress, delivering significant free cash flow from its low-cost production assets, with high-quality development and exploration assets that will deliver future growth. "With our recent oil discovery in Guyana, strong balance sheet and good progress being made in Kenya, there is plenty to look forward to," McDade said.

Kenya early this month exported its first crude oil after the government and a group led by explorer Tullow Oil picked trading company ChemChina UK Ltd to buy its first shipments. President Uhuru Kenyatta said earlier this month that Kenya had secured a buyer for 200,000 barrels of crude oil worth $12m (sh44b).

However, there has been speculation how this money will be paid or it will be used to pay debts owed to China since the oil was purchased by a Chines state-owned company.

Robert Kasande, permanent secretary at the ministry of energy and mineral development said government had communicated its tax assessment for the sales deal through Uganda Revenue Authority early this month following the laws of Uganda.

Kasande noted that tax disagreements of the amount to be paid and waived off had affected the completion of the deal.

Kasande said government would continue to work with the oil companies when the new sale is re-initiated.

It is depressing to preside over a funeral of a mother who has died giving birth, says Priest