KCCA closes in on Nigerian striker Odumegw...
Next Story

Mehta Golf Club's Rogers Eyoyo and Frolence Aciyo returned 72 and 93 gross respectively to win the Uganda Open Juniors tournament in their respective categories, in the one-day tournament played at the Lake Victoria Serena Golf Resort.
Playing off scratch, Eyoyo 16, got five birdies to beat Kilembe Mines Golf Club's Amon Bwambale on count-back.
"It was a tough course, I played many bogies but fortunately I got some pars and birdies on some holes. I was five-over after the first nine but got 5 successive birdies from hole-No.14 to 18 brought me back in the game," Eyoyo a student at YMCA Lugazi said.
"Despite losing five balls in the lake I tried as much to save par on those holes," Eyoyo who had a tough opening nine holes stated.
After winning the girls category, Aciyo is planning to go back to the drawing board in order to return better scores in the Ladies Open for which she qualified to participate in.
"It was not easy but I fought hard to get whatever scores I got; I now want to continue practicing a lot and bring even better scores in the next tournament," Aciyo said.
The top ten boys and top five girls will play in the Amateur Open and the Ladies Open courtesy of UGU president Innocent Kihika and Lady President Eva Magala. 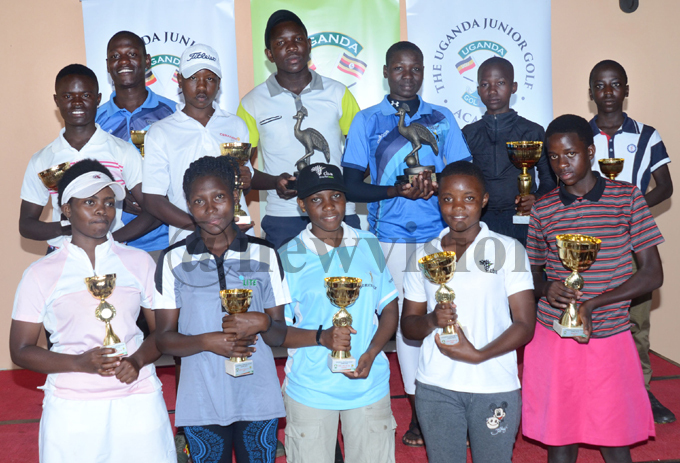 The different winners pose with their trophies after the Juniors Open at Serena. PHOTO: Michael Nsubuga

â€˜I was supported by strong forces'