TOP National STORY
2 years ago .
UNBS upholds ban on bleaching products
This comes after UNBS tested some products and found cosmetics containing mercury and hydroquinone in Uganda exceeding the levels recommended by the UNBS standards.

Uganda National Bureau of Standards (UNBS) has continued to ban cosmetics containing mercury and hydroquinone the ingredients deliberate to lighten and bleach the skin.

This comes after UNBS tested some products and found cosmetics containing mercury and hydroquinone in Uganda exceeding the levels recommended by the UNBS standards.

Apparently, Hydroquinone is well-defined as a cancer-causing chemical which makes the skin dark and thick while mercury is toxic that causes skin rashes, blotching, discoloration, and long exposure leads to the destruction of vital body parts such as kidney, digestive and nervous systems.

UNBS has instructed Ugandans to be careful when purchasing cosmetic products obtained from trustworthy and accredited pharmacies.

"we would like to inform the public to report cases of substandard products that are currently available on the market on a toll-free line 0800133133" because these products are smuggled from neighboring borders."

Research has established that hydroquinone was banned in Japan, European and Australian countries in 2016, Uganda banned the manufacture, importation, and sale of cosmetics that contain mercury and hydroquinone.

In Uganda, cosmetics are governed by a number of compulsory Uganda standards including  EAS377-1:2013 which clearly states that there shall not be any hydroquinone or mercury in cosmetics to be used for skin application. 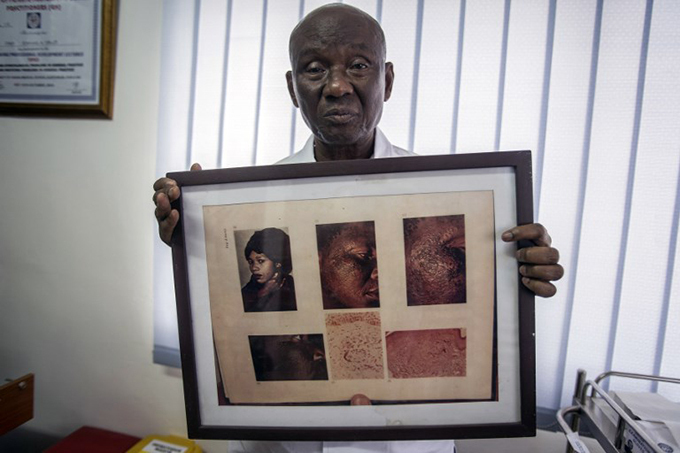 Edmund Delle, dermatologist and founder of Rabito Clinic holds a picture of a woman with Exogenous Ochronosis, a cutaneous disorder due to a long-term application of hydroquinone skin-lightening beauty products. (AFP Photo)

Skin bleaching in Africa: An 'addiction' with risks

Over 100 banned cosmetics on sale