With nine children including a set of twins and triplets, she was looking forward to another set of twins. At least, this is what the scan had shown during antenatal visits.

However, things took a different turn over the weekend when Sophiati Mutesi, 27, gave birth to five babies in a span of 7 hours, making her a mother of 14 children in total.

The stay home mother and a resident of Nawainkoke village in Namutumba district delivered five bouncing babies between 6.30 pm on Saturday and 3.00am on Sunday. The babies weighed between 1.2kgs and 1.5kgs each.

Mutesi delivered her first baby on her way to Kiibaale Health Center II. She was riding on the motorcycle in the company of her husband when she suddenly felt the urge to pass urine. She then asked the cyclist to stop and in the process, she went into labour and the first baby came out. A Good samaritan woman attended to her and later accompanied her to the health facility. 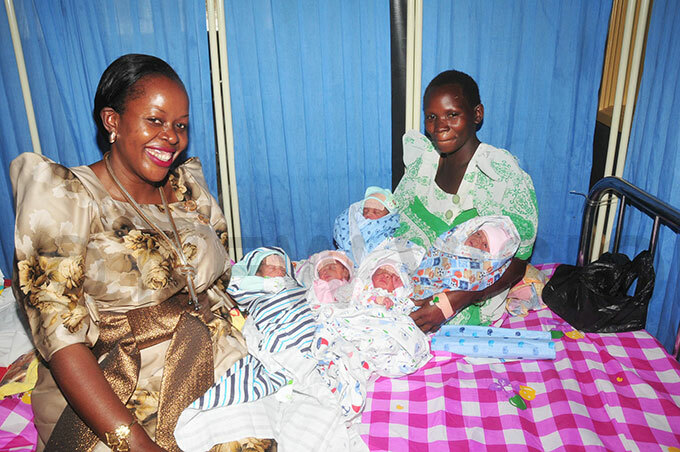 After examination, the midwives at the health facility realized there were two more babies in a breech position (presenting with legs first). Unable to handle her complications, they referred  Mutesi to Nsiinze health center IV in Namutumba district.

At about 8.00 pm Mutesi started off another journey amidst painful labor contractions. She braved the bumpy and dusty five-kilometer distance on a motorcycle to Nsiize health center IV. When she was examined using an ultrasound scan, the report also indicated two retained babies in a breech position.

Esther Namugaya the midwife at Nsinze health center IV said being the seventh pregnancy, they considered it as a risky delivery that required a hospital setting.  At about 10.00 pm Mutesi was taken to Iganga hospital in an ambulance.

"I realized her womb was extremely extended. When I palpitated her, I felt three heads presenting with legs first," Mary Lugolole an enrolled midwife at Iganga Hospital said.

The second twin was delivered at 2.25 am and was a baby girl weighing 1.5kg. The third was lying across the wound medically termed as transverse position making it difficult to be delivered.

Upon consulting the gynecologist, he advised the midwives to continue with delivery since it was small in size. After about 10 minutes, the baby girl came out weighing 1.2 kgs being the smallest baby of the five.

Although the babies were small at birth, they were due (term), had no complications and were initiated to breastfeeding in the first hour of birth. The mother too did not have any complications, Lugolole said

This morning, Maureen Babine a nursing officer working at the intensive care special unit at Iganga Hospital said the babies are being monitored in a private room. "They are stable (not on oxygen) and are breastfeeding well.  In addition, they are on medication to prevent infections because they are very small," Babine said.

She said since the babies are small, they plan to initiate Kangaroo Mother Care to give them warmth.

"Since they are many, we shall put two babies in the mother's chest, their father and the two caretakers will also carry one each" Babine said.

Kangaroo Mother Care consists of skin to skin positioning with the mother breastfeeding and giving supportive care. According to WHO guidelines, the intervention is recommended for stable but small babies.

Mutesi recalls that during antenatal visit routines, the ultrasound scan showed she was carrying only two babies.  She was however shocked when the midwives at Iganga hospital revealed that she had more babies in the womb.  "I feared and thought I was going to die," she recollects.

Mutesi who is a stay home mum depending on subsistence farming says multiple babies run in her family. With seven pregnancies, Mutesi has a total of 14 children. Her first four deliveries were single babies, the fifth delivery was for twins, the sixth delivery gave her triplets followed by the five babies.

Mutesi was born to Kirunda Edirisa and late Isha Nambeya of Mpulira village in Kibaale parish in Nabweyo sub-county in Namutumba district. She is the second born out of four children and is followed by a set of twins.

Mutesi who is a stay home mum and depends on subsistence farming to fend for the children, says feeding the five babies is going to be challenging. She appeals to good Samaritans for support.

The husband Birali Salire Mbanya, 37, says although the news of five babies was shocking, he could not abandon his wife.  Mbanya said he developed courage after they had delivered a set of twins which was later followed by triplets who are about 3 years old.

Mbanya who is a peasant says he does not have the capacity to take care of all the children.

"I do not have my own land. Every season I rent an acre of land for cultivation. After harvest I sell the yield to pay for the hired land and keep the surplus for my family," Mbanya says. He says with their eldest child who is 14 years, he finds it challenging to feed and pay school fees for the children.

"With the addition of five babies, I feel my shoulders overweighed by the responsibility. I appeal to the good Samaritans for support," he said

Dr. Evelyn Nabunya the executive director at Mulago Specialized Women's and Neonatal hospital says some women have high fertility; meaning every ovulation cycle they produce more than one egg.

In addition, Dr. Andabati Gonza the executive director of Bethany Women's and Family hospital based in Luzira blames the multiple twinning like the case of Mutesi to genetical factors.

"It tends to run in families and it can repeat itself in the same person because the DNA remains the same," Dr. Andabati explains.

For instance, he explains that since Mutesi is followed by twins, she must be having a genetic predisposition and in high order. It is for this reason that she first delivered a set of twins, then added triplets and now five babies.

Explaining the high fertility issue, Dr. Andabati says every month about 5 to 10 eggs are recruited from the ovaries every month but the body is programmed to select only one egg to mature. Then release that one so that it is available for fertilization and maturation into a baby.

However, in some individuals, this mechanism has genetic defects. Instead of selecting only one egg, their bodies support the maturation of more eggs.

He says in most cases the twins are not identical because they are made from different eggs.

He warns that with such genetic risk factor, Mutesi stands a risk of having another multiple pregnancy and in high order.

Although Mutesi's babies were born too small, Dr. Andabati says babies of more than one kilogram have a high chance of survival.

"The health workers should ensure they are under good pediatric care. All they need are three major things; to be fed, provided with warmth and proper good hygiene to protect them against infection," he notes.