A six-month-old baby is the only survivor in a Wednesday morning crash involving a trailer and a Canter truck at a "black spot" in Kitigoma, Buikwe district.

A scene of death at Kitigoma following the head-on crash. (Credit: Donald Kiirya)

A six-month-old baby is the only survivor in a Wednesday morning crash involving a trailer and a Canter truck at a "black spot" in Kitigoma, Buikwe district.

BUIKWE - A six-month-old baby was the only survivor in a Wednesday morning head-on crash that killed four people on the Kampala-Jinja highway.

The collision involved a trailer and a Fuso truck at a "black spot" in Kitigoma, Buikwe district. It happened at around 2:00am on the boundary of Kitigoma and Lugalambo.

Both drivers died alongside one other occupant of each vehicle.

The Fuso truck carrying boxes of tomatoes from Kampala to neighbouring Kenya had the owner of the cargo on board. He was named as Samuel Gatuwa, a Kenyan national and resident of Kitale in northern Rift Valley. His compatriot, the driver, was identified as Steven Nuwangi, a resident of Nakuru.

The driver of the cement-laden trailer, which was destined for Kampala from Jinja, was confirmed dead but yet to be identified.

He was on board with a woman who was with a baby at the time of the accident. She was identified as Lynette Nabunya, a teacher of St. Kizito Nakatyaba Primary School, Buikwe.

Her baby was found alive and unhurt, and was transported to Kawolo Hospital for a medical check. Nabunya's body was taken to the facility's mortuary for a postmorten examination.

The other three bodies were also taken to Kawolo Hospital Mortuary. The trailer, which was carrying cement, tipped over after the collision 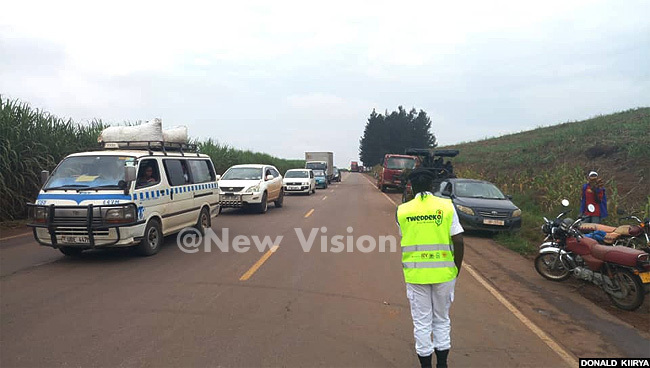 Traffic flow along the route was affected A crane was deployed to haul the wreckage 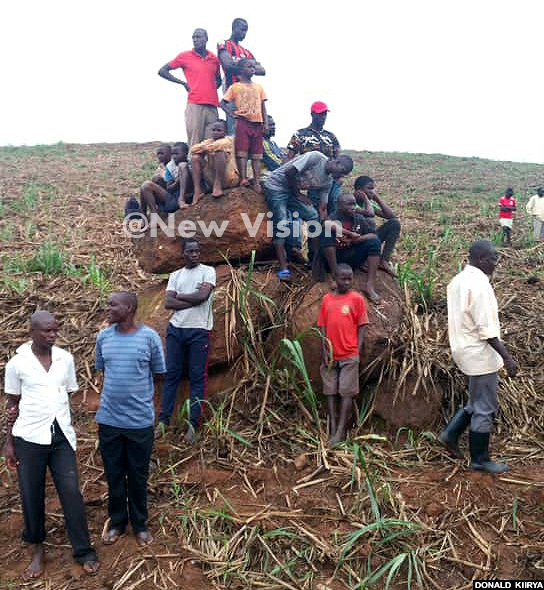 The accident attracted the attention of residents, many of whom looked helplessly as the bodies were retrieved The vehicles were mangled in the deadly head-on crash 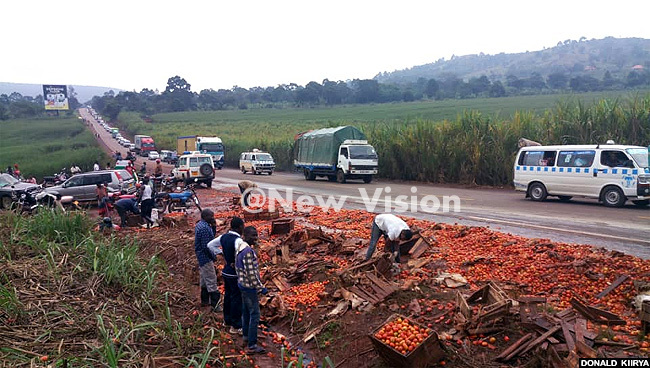 The Canter truck, destined for tomatoes, was carrying boxes of tomatoes

ANOTHER DEADLY EPISODE ON THE ROAD


Wednesday's accident came only three days after another involving a bus and a commuter taxi occured in Busembatia along the Mbale-Tirinyi highway, also on the eastern route.

Ten people, all occupants of the commuter taxi, were killed in one of the deadliest road crashes in recent times.

A week before, two people were killed and more than 40 others got injured when a YY bus lost control and overturned at Busei B village, three kilometres along the Iganga-Bugiri highway.

In the latest crash, the trailer and truck were moving in opposite directions, before colliding head-on. The truck, moving to Jinja from Kampala, was carrying boxes of tomatoes.

Traffic flow was brought to a standstill as traffic Police hastened to clear the scene of the accident. This section of the road was filled with tomatoes that had spilled out of the truck and the Police had to call up the fire brigade, who washed off the tomatoes to prevent any skidding.

Helen Butoto, the police spokesperson for Sezibwa region, was at the scene.

She told New Vision they had moved in quickly to control the traffic. For about 40 minutes, no vehicle could move on either side. Two bodies were pulled out of the wreckage, with a baby the only immediate survivor.

The driver of the trailer remained trapped inside the mangled remains of the vehicle. His chances of survival were low, an eyewitness told New Vision.

People on the sidelines of the scene said the place is a black spot, as it is narrow.

One said they had for long appealed to authorities to have the road widened to four lanes, but nothing has been done.

Meanwhile, Police's Butoto said it was a shame that the accident had happened, and cautioned motorists to follow traffic regulations.

In March 2017, Toroma Country MP Cyrus Amodoi Imalingat was among those killed in a crash involving three vehicles around the same place.

'Many dead' in Mbale-Tirinyi road crash

Only 50 scoop gov't scholarships at Makerere