TOP News STORY
2 years ago .
Today in History: ADF kills Kichwamba students
On August 20, 1998, ADF rebels killed 15 students who they had abducted after the attack on the Kichwamba Technical Institute in Kabarole on June 8, 1998.

0 views
MURDER       KICHWAMBA        ADF
The Allied Democratic Forces (ADF) rebels killed 15 students who had been held captive after the massacre at the school.
On June 8, 1998, ADF rebels had raided Kichwamba Technical Institute in Kabarole, burning 80 students to death and abducting more than 100.
It is 21 years, since the Allied Democratic Forces (ADF) attacked Kicwamba Technical College, in Kabarole district, burning 80 students to death and abducting more than 100.
On June 8, 1998, ADF rebels commanded by Jamil Mukulu descended on the innocent students and massacred them mercilessly. Mukulu has since been arrested and detained by the Ugandan government.
The rebels locked the students in there dormitories before setting them on fire.  Twenty-seven students who were burnt beyond recognition were buried in a mass grave at the college. The grave bears the names of all the 27 students who were buried there.
Although some student escaped and survived the attack, they remain haunted by the bad experience. 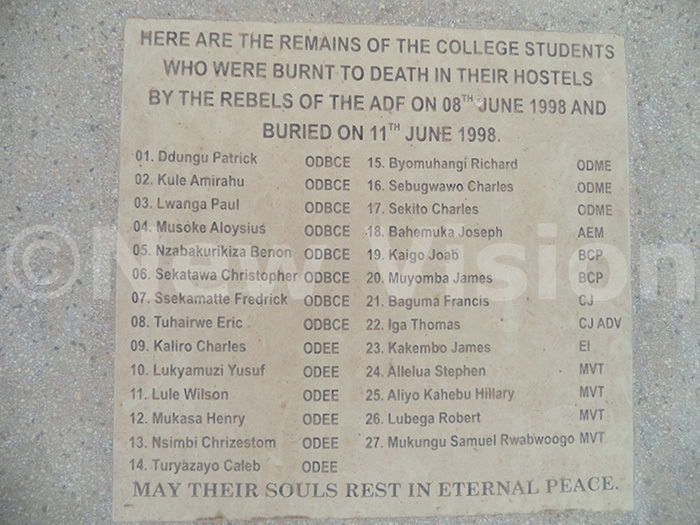 An inscription on the mass grave of the 27 students of Kicwamba Techinical College who were burnt to death by ADF in 1998.

Survivor's tale
Rogers Kanti
I was woken up by gunshots at around 5:00 am. A few bullets were shot in our dormitory, but they never hurt the students. In other dormitories, I would hear students yelling with there dormitories covered with smoke.

We kept locked into the dormitory up to 8:30 am when the UPDF neutralised the rebels and opened for us. But we were full of fear not sure of what would happen again.

By the time the rebels were neutralised, 80 students were already killed, 100 abducted.

The scenes were nasty, I saw my friends' bodies burnt beyond recognition. Others who were badly burnt, but still alive were rushed to the hospital. I remember using my jacket to carry Joshua Luyimbazi, who was badly burnt. God should have not let such a thing to happen.

I never went back; I was taken to Uganda Polytechnic Kyambogo (UPK) where I completed my course. I would always get nightmares dreaming of those horrific scenes. Until now I've never come to terms with what happened.
The Government has since renovated the three dormitories that were burnt during the ADF attack and put up new structures.
Kicwamba is located in Kabarole district on the slopes of Rwenzori Mountain where the rebels used to operate.  The college is about 14km from Fort Portal town.
It offers programmes leading to the award of National and Higher Diplomas in Engineering and ICT.
Currently, the college has over 500 students. Security has been tightened with a permanent army Détaché at the school premises.
The ADF is a rebel group which operated in western Uganda in the Rwenzori mountains and caused alot of havoc in the nineties, resulting in the suffering of the population in the area.
They committed atrocities against the local civilian population, driving them from there homes and farms in the mountains into lowland towns.
The group was defeated by the Uganda People's Defence Forces (UPDF) and it's remnants forced to DR Congo.
Several members of the rebel outfit have surrendered or were captured while the majority were killed by the army.