The Libyan navy said Sunday 335 migrants had been rescued and one body recovered in separate operations off the coast, as they tried to cross the Mediterranean to reach Europe.

Nine children were among 57 migrants in a wooden boat rescued Saturday about 40 nautical miles from the town of Zuwara, west of Tripoli, navy spokesman General Ayoub Kacem told AFP.

He said they were from Ethiopia and Egypt.

It came days after Libyan navy patrols on Tuesday "rescued 278 migrants on board four inflatable boats northwest and northeast of Tripoli", Kacem added.

The operations took place off the coasts of the cities of Khoms, 120 kilometres (75 miles) east of Tripoli, and Sabratha, located 70 kilometres west of the capital.

According to the statement, 128 Sudanese were in the boats, in addition to migrants from Chad, Egypt, Niger, Benin and Eritrea, including 35 women and 11 children.

One body was also recovered by the coastguard. 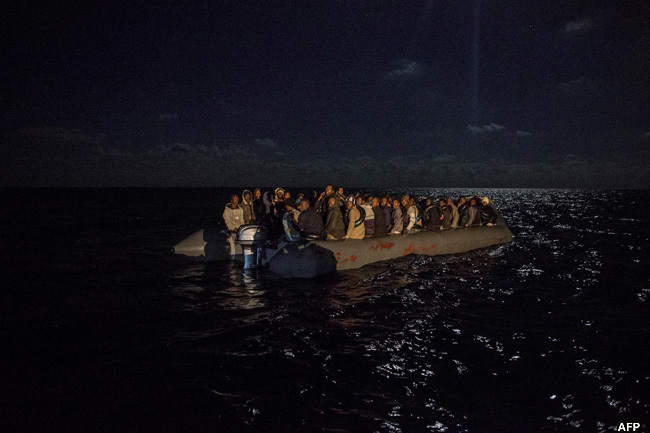 On December 22, 2018, these migrants onboard an inflatible boat wait for being rescued off the coast of Libya by Proactiva Open Arms organisation

Libya, which has been wracked by chaos since the 2011 uprising that killed dictator Moamer Kadhafi, has long been a major transit route for migrants, especially from sub-Saharan Africa.

In general, migrants rescued at sea are first met by humanitarian agencies that provide medical care and food.

They are then taken into the charge of the body working to combat immigration at the interior ministry of the UN-recognised Government of National Accord.

On August 9, the Libyan navy accused the authorities of failing to manage migrants rescued at sea, claiming that it could be forced to let people go free once brought back to land.

Despite the risks, migrants continue to attempt to reach Europe by sea, preferring to take their chances than stay in Libya, where they are subject to abuse, extortion and torture, according to humanitarian organisations.