Parliament staff donate to mother of prema...
Next Story

Following the successful bail application on Friday, the Grade One Grade Magistrate Stella Amabilis said the six accused presented two sureties each, of whom all court found to be substantial.

"On presenting substantial sureties to this court, the accused are hereby bonded a sh300, 000 cash bond and on default, they should be remanded back to Luzira Prisons till the next hearing date," Amabilis ruled.

"And the sureties are bonded sh3m non-cash each," she added. 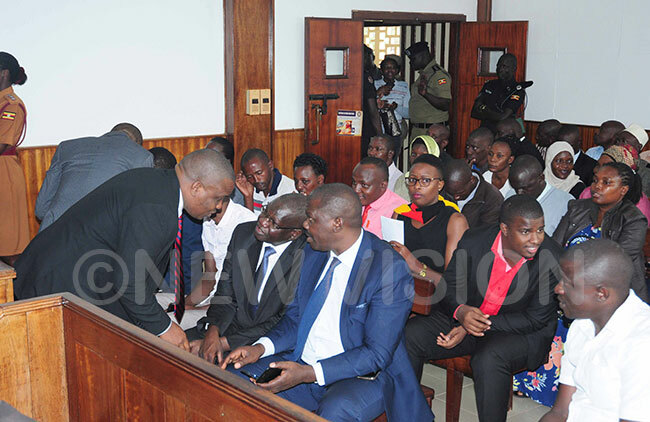 The state attorneys Miriam Njuki and Patricia Cingatho informed the court that investigations in the matter were complete and sought for a hearing date.

"Your worship, investigations are complete and we pray that the case is fixed for hearing," Njuki submitted.

Meanwhile, the defence counsels Isaac Ssemakadde (stood in brief for Erias Lukwago) requested court to scrap away the charge of incitement to violence and contempt of court.

They informed the court that the two alleged offences are framed which contravenes section 88(0) of the Magistrates Courts Act.

This prompted the trial magistrate to adjourn the case to September 23, 2019, for hearing and state response to the defence.

The prosecution alleges that the accused and others still at large on August 2, 2019, at Buganda Road Court incited court audience to do an act of violence against her worship Gladys Kamasanyu by reason of her office.

The accused also, within the premises of the court in which a judicial proceeding was being heard, showed disrespect in speech manner to reference of the said proceeding and the magistrate presiding by abusing her (Kamasanyu) with obscene words to wit that she is smelling like a vagina, throwing of a bottle of mineral water to the magistrate and making noise in court.

It is also alleged that Kabali, Wanyera, Abenabyo, and others still at large unlawfully damaged or destroyed walk detector machine, the property of Buganda Road Court.