IRCU roots for HIV testing corners at plac...
Next Story

In her new role, Winnie Byanyima will lead a large team in an expanded response to the HIV and AIDS pandemic around the world.

In her new role, Winnie Byanyima will lead a large team in an expanded response to the HIV and AIDS pandemic around the world.

KAMPALA - Ugandan diplomat Winnie Byanyima says she is "honoured to be asked to lead the UN and global HIV response", following her appointment as the new executive director of the Joint United Nations Programme on HIV and AIDS (UNAIDS).

The agency has "warmly" welcomed her appointment.

Byanyima joins a select cast of individuals that have previously taken the position, including Belgian Peter Piot and Malian Michel Sidibé. Gunilla Carlsson from Sweden has been serving as executive director in the interim following Sidibé's departure this year.

In her new role, the 60-year-old will lead a large team in an expanded response to the HIV and AIDS pandemic around the world.

She wields a wealth of experience - spanning 30 years - in political leadership, diplomacy and humanitarian engagement. Byanyima is an aeronautical engineer, politician and diplomat

Byanyima, the wife of Ugandan Opposition politician Dr. Kizza Besigye, will flip over to the next chapter of her illustrious career from her current position as executive director of Oxfam International, having taken its leadership in 2013.

"I embrace the role with humility, passion and faith that we can end this pandemic [HIV and AIDS] by 2030," she tweeted as news of her appointment spread Wednesday.

In her message, Byanyima, who describes herself as being passionate about justice and human dignity, said she looks forward to joining the UNAIDS team and to "working closely with co-sponsors and partners to remove barriers to prevention, treatment and care".

An honour 2 be asked 2 lead the UN & global HIV response! I embrace the role with humility, passion & faith that we can end this pandemic by 2030. I look fwd to joining @UNAIDS team & working closely with co-sponsors & partners 2 remove barriers to prevention, treatment & care https://t.co/i4GPSUzObu


"The end of AIDS as a public health threat by 2030 is a goal that is within the world's reach, but I do not underestimate the scale of the challenge ahead," Byanyima is quoted as saying of her new task.

"Working with all its partners, UNAIDS must continue to speak up for the people left behind and champion human rights as the only way to end the epidemic."

Statistically, 37.9 million people were living with HIV and AIDS worldwide in 2018, according to the World Health Organisation (WHO).

The agency says as many as 770,000 people are reported to have died of HIV-related illnesses worldwide in 2018. In terms of prevention, 129 low- and middle-income countries reported a total of 150 million people tested in 2014.

The WHO African region remains most severely affected, with nearly 1 in every 25 adults (3.9%) living with HIV and accounting for more than two-thirds of the people living with HIV worldwide.

Byanyima began her career as a champion of marginalised communities and women 30 years ago as an MP in Uganda's Parliament. She served two consecutive terms, representing Mbarara Municipality from 1994 until 2004.

In 2004, she became the director of Women and Development at the African Union Commission, working on the Protocol on the Rights of Women in Africa, an international human rights instrument that became an important tool for reducing the disproportionate effect of HIV on the lives of women in Africa.

She has served as the director of the Gender Team in the Bureau for Development Policy at the United Nations Development Programme (UNDP) from 2006.

Byanyima holds an advanced degree in mechanical engineering (in energy conservation and the environment) from the Cranfield Institute of Technology and an undergraduate degree in aeronautical engineering from the University of Manchester.


How Byanyima was appointed Her appointment followed what UNAIDS calls a comprehensive selection process that involved a search committee constituted by members of the UNAIDS Programme Coordinating Board.

The UNAIDS Committee of Cosponsoring Organisations made the final recommendation on the appointment to Guteress.

The search for Sidibe's replacement started in December last year and was projected be concluded July this year when the list of the names would be sent to the UN Secretary-General to make the appointment.

Byanyima was listed among the top five contenders for the executive director role.

The Ugandan has since successfully taken the position.

"The Secretary-General wishes to extend his appreciation and gratitude to the UNAIDS deputy executive director, management and governance, Gunilla Carlsson, for her service as the executive director [in the interim," reads a statement by UNAIDS.


The five goals of UNAIDS

• Tracking, monitoring and evaluation of the pandemic and of responses to it

• Civil society engagement and the development of strategic partnerships

• Mobilization of resources to support an effective response


"An inspiration to young women"

"UNAIDS is very lucky to have you"

"An ambassador worthy of the role" 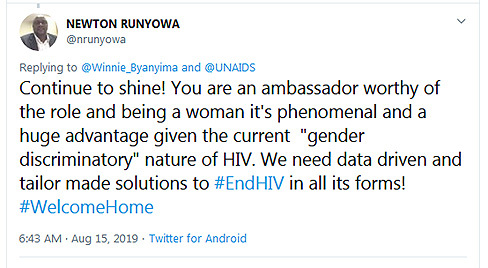