MENU
While in Kampala tease those taste buds
Previous Story

Murchison Falls: A wealth of history

Other than millions of ordinary visitors, it has attracted globally notable personalities.

Uganda has exclusive rights to Murchison Falls unlike other homogenous tourism attractions in other destinations. (Photo by Titus Kakembo )

Other than millions of ordinary visitors, it has attracted globally notable personalities.

After eight hours from Kampala city, the van engine sucked in a sigh of relief upon reaching Murchison Falls National Park which is endowed with a wealth of history.

Other than millions of ordinary visitors, it has attracted globally notable personalities. On the list are former USA president Nixon Roosevelt in 1909.

On his heels came UK Premier Sir Winston Churchill in 1907. Wordsmith Earnest Hemingway was there in 1919 long before Prince Charles and many others followed suit.

"I guess it was the panoramic view of the falls plunging 45 meters down that made Churchill coin the phrase Uganda is the Pearl of Africa," confides the Association of Uganda Tour Operators (AUTO) director Oleni Ntale. 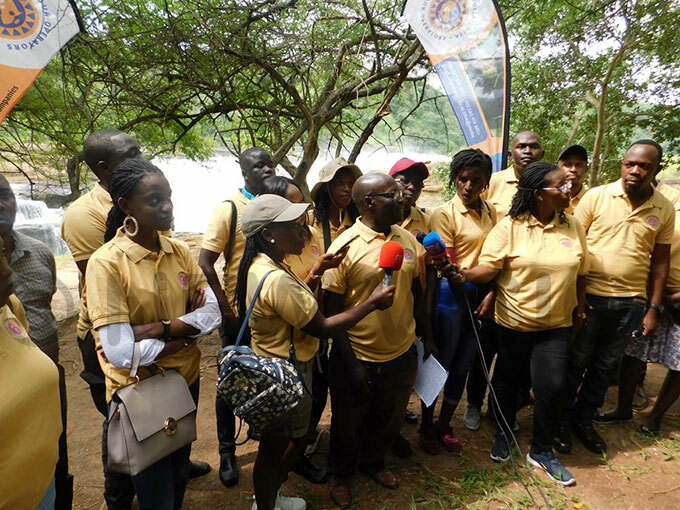 "See the permanent rainbow there; hear the water slapping the rocks in a chorus with the tweet of birds. This makes the 3, 893 km squared park interesting."

While there, I saw mesmerized domestic and foreign tourists taking selfies, sitting on the rocks to meditate and appreciate what nature has endowed destination Uganda with. From a distance, the sky seems to hug the frothy waters on the Nile as it lazily saunters away after surviving the stone encounter.

"Next year Masindi Hotel on Butiaba road is expecting David Baker, the grandson of the explorer who named the park here," says spokesperson of the tourism fraternity Jonathan Banaih. "He has already booked accommodation.

And by the way, this is the oldest hotel in Uganda. It was built way back in 1923 and the room in which Hemingway slept when he toured the park and had a plane crash is being renovated."

On the walls of the legendary hotel are black and white photos of Hemingway in a dugout canoe. A story is told of how he was announced dead in newspapers back home but later returned to edit his obituary of how he survived death near Murchison Falls.

Intricately interwoven in the Murchison narrative is the Baker family and Uganda Wildlife Authority (UWA) who were instrumental in creating and furnishing the Baker's Trail ranked the best in the country. It is a two hours walk that ends at the falls with a compulsory shower.

Oral literature has it that Omukama Kabalega, on finding the Acholi warriors strong enough to strengthen his army is reported through oral literature to have enticed men with curvy and beefy Ankole women if they won a war.

Unfortunately, the tourism industry fraternity is worried about losing  Murchison Falls National Park attraction because of the ongoing enlarging of the road from the gate, when one passes through Masindi.

They expressed concern upon finding graders in motion and men building massive bridges. Their fury follows an ERA's advert announcing that a dam will be constructed near Murchison Falls in Kiryandongo and Nwoya districts.

It went on to state the exact area by geographical coordinates as between 'Longitude 2º16'42.6" N and Latitude 31º41'08.8" E.' A google map search of the advertised coordinates reveals that the dam will be constructed at the Murchison Falls on Victoria Nile - a tributary of the River Nile.

Asked about the road construction Uganda Wildlife Authority (UWA) spokesman Gessa Simplicious referred us to his senior Charles Tumwesigye who was not picking his mobile telephone. The minister of tourism and antiquities Ephraim Kamuntu said government follows procedures while doing anything.

"I will communicate to you at an appropriate time about the road construction in the park," said Kamuntu.

"The reception of baboons on the roadside that we always get is no more," laments the AUTO chairman Everest Kayondo. "If anything we do not need highways in conservation areas like Murchison Falls National Park (MFNP.) Already we are being challenged to contain the raging war between wildlife and human beings for resources."

Adding that, last year it was 104,000 visitors who were logged to have visited Murchison Falls National Park.

"This makes the figure of 44, 000 gorilla trackers comparably minimal," stressed Kayondo.  "This park makes destination Uganda exclusive because much as the Big Five can be seen in other destination, the falls are only found here. Constructing a dam will reduce the volume of water that thrills viewers"

MINISTRY OF ENERGY AND MINERAL DEVELOPMENT

The Ministry of Energy and Mineral Development

The Ministry of Energy and Mineral Development