Smiles as UPDF celebrates Eid Aduha in Wakiso
Next Story

Protestors block vehicles in a demonstration that lasts about an hour, before Police personnel intervene.

Anti-riot police clearing the road. (All photos by Paul Watala)

Protestors block vehicles in a demonstration that lasts about an hour, before Police personnel intervene.

Police in Mbale Monday morning fired live bullets and tear gas to disperse hundreds of angry residents who had blocked Mbale-Kumi-Soroti highway, protesting the Government's failure to put humps at Nkoma in northern division Mbale municipality.
They used huge blocks, tree branches and garbage, and also lit a fire in the middle of the road, which paralysed traffic flow.
Business along the normally busy road was brought to a standstill as hundreds of heavy trucks from the Malaba-Busia border heading to different parts of the country got stranded.
Protestors blocked vehicles in a demonstration that lasted about an hour, before Police personnel intervened. 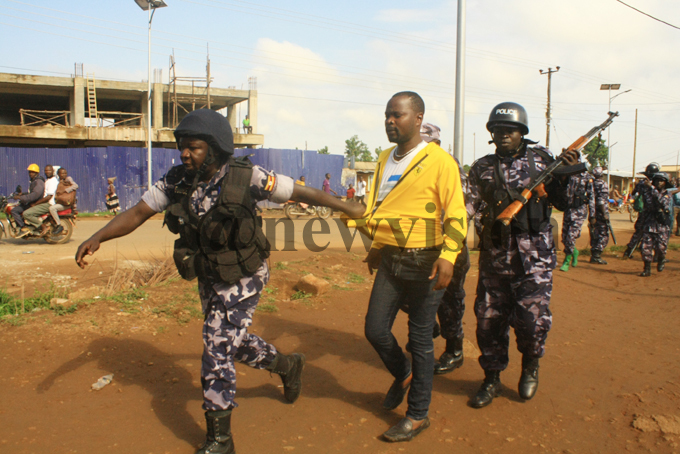 Police arrests one of the protestors

Most of the trucks, some carrying fuel, were forced to make a U-turn and use alternative routes while others remained parked as they awaited Police's intervention.
Upon arrival at the scene, the heavily armed Police were pelted with stones by the furious residents, forcing them to respond with live fire and teargas.
The scuffle sent the protestors scampering for cover as some Police personnel tried to clear the blockaded road. 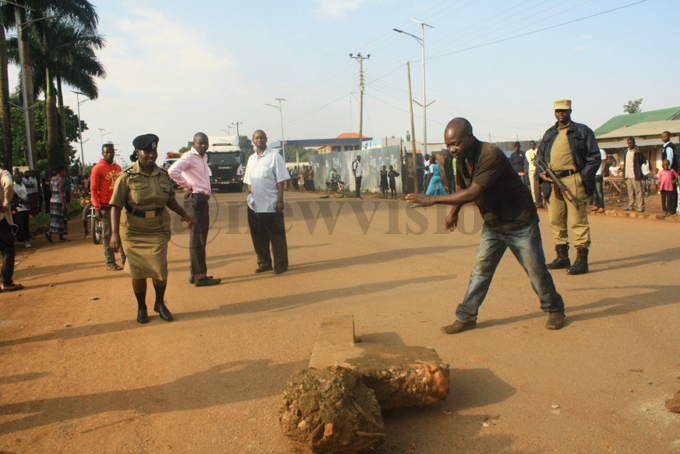 Police clearing the road that had been blocked by the protestors

"We have lost nine people at the same spot in the period of less than two months We have demanded that the Government adds humps at Nkoma-Kikindu Market but all in vain," said Kawanguzi Yassin, a resident.
"I do not encourage people to demonstrate but we cannot continue losing people because of the negligence of our leaders."
Josephine Namono, also a  resident and food vendor at Nkoma Market, said most accidents happen during rush hours, with the most prone being boda boda riders, school-going children and drunkards.
She said that in the past, accidents were common at the IUIU stage. But after residents demonstrated and humps added, occurance of accidents reduced.
"Nkoma Market has turned into a death trap because we hardly take a full week without seeing somebody knocked down by aspeeding car or boda boda,'' said Namono. 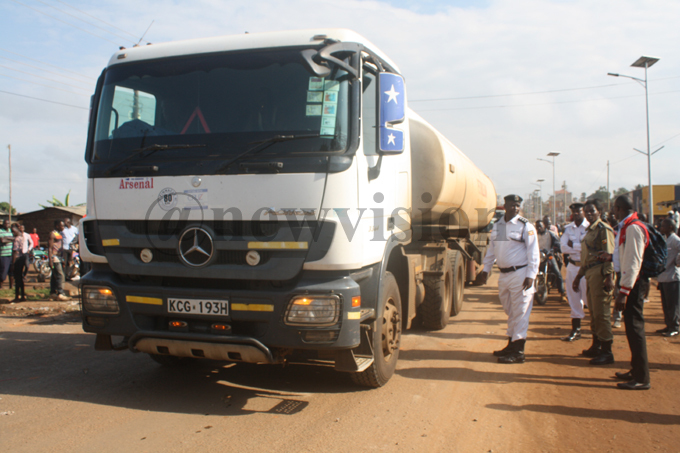 One of the oil tankers that had been blocked by protestors

Elgon region traffic officer Godfrey Mwesigye was at the scene as people demonstrated and tried to engage the residents but with futility.
He said it was not the work of traffic or Police to fix humps on the roads, adding that as Police, they had written to concerned authorities over the matter.