Peter Lokeris the state minister for energy and mineral development cutting the ribbon as other officials look on. Photo by Adolf Ayoreka

NTUNGAMO - The government through the Ministry of Energy and Mineral Development has set aside sh6bn to construct a state of the art regional mineral beneficiation center to boost artisanal and small scale mining in Uganda.

Peter Lokeris the state minister for energy and mineral development who officiated the site handover ceremony on Monday revealed that the Ministry through the directorate of geological survey and mines has set out to construct four regional mineral beneficiation centers in Ntungamo, Busia, Moroto and Fort portal under the ongoing mineral wealth and mining Infrastructure development.

He said that it is in line with the government's policy objectives to organize and legislate artisanal and small scale mining in Uganda.

"This center will be the first of its kind in Uganda because as the ministry we want to provide a framework for marketing and value addition of minerals to promote local content for national participation in the mineral industry," Said minister Lokeris.

He added that it will be a residential training center with facilities for trainees and trainers which will greatly support further growth of the minerals subsector to realize socio-economic development among the local communities.

It should be noted that Ntungamo is one of the most endowed districts with various mineral deposits especially Tin in areas of Kakanena, Mwerasandu and Rwengoma all in Ruhama County.

"We said with these minerals lets skill our small scale miners instead of selling raw minerals, they should modify them and sell finished products and get much money," He said

He added that the beneficiation center will not only add value to the minerals but also provide jobs and improve standards of living.

"This place will be a hub for everything in western Uganda since we are aiming at bringing services closer to people rather than keeping them in Kampala" Lokeris emphasized. 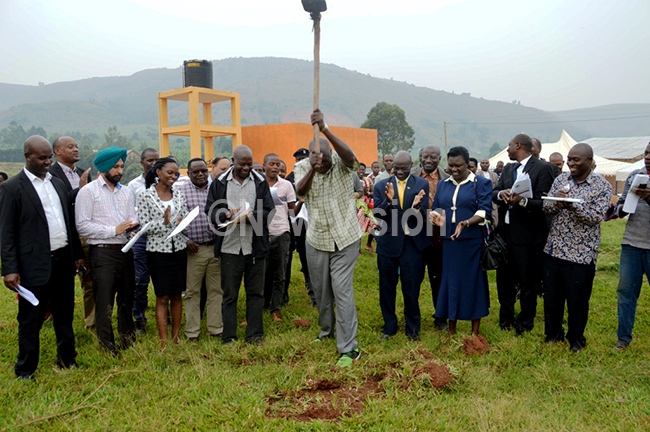 Denis Singahakye the LCV chairman for Ntungamo district applauded the government's efforts to ensure there is socio-economic transformation with its citizen by setting up such facilities.

"When we were approached to offer land for this center, we didn't hesitate as the district because it was for a good cause. We realized it was a good vision that was aiming at transforming our people," Singahakye said

He added that as the people of Ntungamo they were blessed to get a beneficiation center that will not only buy their minerals but also train small scale miners in various skills.

Agnes Alaba commissioner mines under the Directorate of Geological Survey and Mines thanked President Museveni for the wise vision on mineral value addition.

"As you are aware that we are endowed with over 27 minerals but Uganda has been getting little from these minerals in terms of foreign exchange because it has been hindered by value addition and weak policies on minerals,"

However small scale miners asked the government to provide them with improved technology of mining Tin rather than using their hands which they said has become risky to their lives.

"We appreciate that finally, this center is going to be constructed in our area but we call upon the government to provide us with mechanized tools rather than using our hands and traditional tools," Yowasi Beyanga the chairperson small scale miners in Ntungamo requested.

The center will take a contractual period of 12 months and this will be undertaken by Tecno 3 Construction Company.

In Pictures: Uganda falls to Zimbabwe