Trump to address nation after US shootings...
Next Story

Tear gas was fired in four separate locations, with the most sustained volleys outside the city's parliament, making Monday's clashes the most geographically spread out so far.

Tear gas was fired in four separate locations, with the most sustained volleys outside the city's parliament, making Monday's clashes the most geographically spread out so far.

Hong Kong riot police clashed with pro-democracy protesters for a third straight day Monday, as the city's leader warned the global financial hub was nearing a "very dangerous situation" and a rare strike caused transport chaos.
Clouds of tear gas billowed across multiple locations on Monday afternoon as the city buckled under a general strike, which protesters pushed to emphasise they still had broad public support following two months of increasingly violent unrest.
In a rare public appearance since the crisis began, chief executive Carrie Lam warned protesters she would not cave into their demands.
"(They) have seriously undermined Hong Kong's law and order and are pushing our city, the city that we all love and many of us helped to build, to the verge of a very dangerous situation," Lam said. 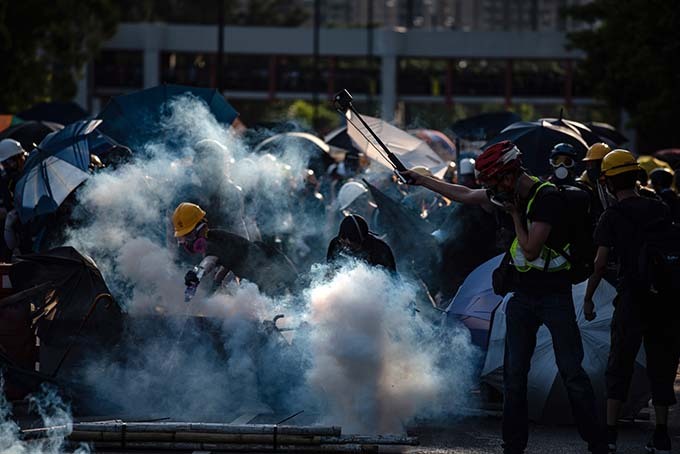 She later referenced chants by protesters for a "revolution", describing this as a challenge to the "one country, two systems" framework under which Hong Kong has been ruled since it returned from British to Chinese rule in 1997.
"I dare say they are trying to destroy Hong Kong," said Lam, who was appointed by a pro-Beijing committee.
China's cabinet-level State Council said it planned to hold a press conference on Tuesday.
Lam spoke on a day that saw widespread civil disobedience across the city.
Activists descended on subway stations during morning rush hour, deliberately keeping open doors to stop trains departing and paralysing large parts of a network that millions of people use daily.
In the afternoon they held seven simultaneous rallies, stretching the resources of police who have become lightning rods for public anger.
Tear gas was fired in four separate locations, with the most sustained volleys outside the city's parliament, making Monday's clashes the most geographically spread out so far.
In a briefing that highlighted the longevity of the protests, police said they had fired more than 1,000 rounds of tear gas and 160 rubber bullets since rallies began on 9 June, with 420 people arrested and 139 officers injured so far. 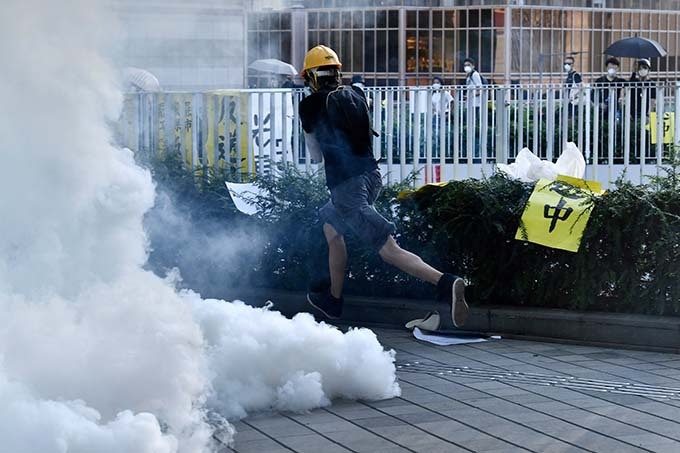 But the protesters remain unbowed.
"Support for the political strike today seems strong and it has been bolstered further by the escalating violence between the police and protesters," political analyst Dixon Wong told AFP.
- Flights cancelled, shops closed -
The strike -- a rare occurrence in a freewheeling finance hub where unions traditionally have little sway -- hit the vital aviation sector.
More than 160 flights at the city's airport, one of the world's busiest, were listed as cancelled on Monday afternoon. Many of the disrupted flights were with Cathay Pacific.
The carrier did not give a reason for the cancellations, but its flight attendants union confirmed some of its members had walked out.
Some key roads were also blocked, causing gridlock.
Many shops across the city were shuttered, including big-name fashion outlets in the central commercial district.
The strike led to some scuffles between angry commuters and protesters at crowded subway stations, with videos circulating across social media highlighting tensions throughout the city.
One video, verified by AFP, showed a car smashing its way through a protester roadblock in the northern town of Yuen Long.
But while some commuters were angered by the disruptions, others said they supported the action.
"As long as the government doesn't respond then for sure the movement will escalate," a civil servant, who gave his surname as Leung, told AFP as he tried to make his way to work.
- China warnings -
The past fortnight has seen a surge in violence from both sides, with police repeatedly firing rubber bullets and tear gas to disperse increasingly hostile projectile-throwing crowds. 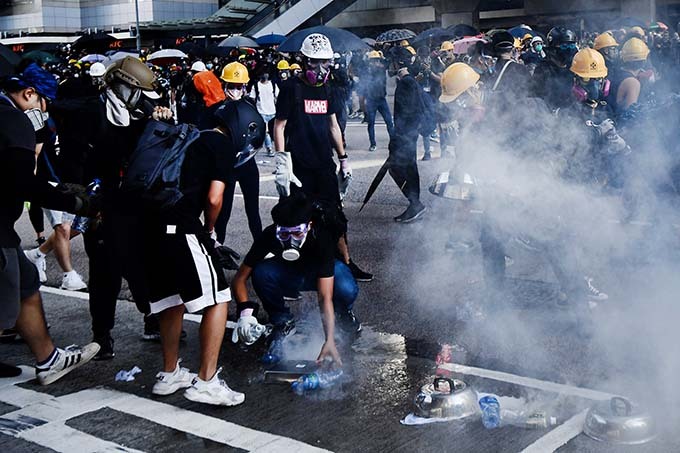 Protesters use cooking utensils to contain tear gas fired by the police in the Admiralty area during a general strike in Hong Kong. (Photo by Anthony WALLACE / AFP)

A week ago a group of men suspected to be linked to triads -- Hong Kong's notorious gangsters -- also attacked demonstrators, putting 45 people in hospital.
Dozens of protesters have been charged with rioting, which carries a jail term of 10 years.
The protests were triggered by opposition to a planned law that would have allowed extraditions to mainland China, but have evolved into a wider movement for democratic reform and a halt to eroding freedoms.
Under the terms of the 1997 handover deal with Britain, Hong Kong has rights and liberties unseen on the Chinese mainland, including an independent judiciary and freedom of speech.
But many say those rights are being curtailed.
Chinese authorities have in public largely left Hong Kong's government to deal with the crisis, although they have begun to issue their own warnings.
China's military last week described the unrest as "intolerable" and released a propaganda video of a drill in which troops quash a protest.