National parks to be fenced off

“We are going to construct similar fences around other parks in the country and supplement them with surveillance cameras,” Museveni said at the public rally before leaving for Kasese to meet selected leaders at Nyakasanga Playground, in Kasese Municipality.

“We are going to construct similar fences around other parks in the country and supplement them with surveillance cameras,” Museveni said at the public rally before leaving for Kasese to meet selected leaders at Nyakasanga Playground, in Kasese Municipality.

RUBIRIZI - President Yoweri Museveni has commissioned the construction of the long-awaited electric fences around the country's national parks starting with Queen Elizabeth Park in western Uganda.

The function that involved the commissioning of the first 10-km phase around the park took place Thursday at Kyenzaza in Rubirizi district, where the Uganda Wildlife Authority (UWA) started constructing the fence in November last year with support from Space for Giants, a Kenya-based conservation organisation.

Briefly addressing a pubic rally at Kyenzaza Playground after commissioning the fence, the President warned the residents against vandalizing the park and to protect there children against electrified fence.

"We are going to construct similar fences around other parks in the country and supplement them with surveillance cameras," Museveni said at the public rally before leaving for Kasese to meet selected leaders at Nyakasanga Playground, in Kasese Municipality.

The president, who pledged to have the fence constructed in his past campaigns, hailed the Ministry of Tourism, Wildlife and national Antiquities and UWA for embarking on the construction works.

Museveni repeated his earlier call to Ugandans to engage in agriculture for both food security and commercial benefits, saying he would return to the area to educate the residents more.

Museveni said the construction was planned to cover other conservation hot spots across the country.

The multibillion fences construction kicked off late last year with support from Space for Giants, a Kenya-based conservation multi-national body.

The fence is the first of its kind in the country and according to the Space for Giants communication Director, Mike Pflanz, the agency was also building the UWA capacity to eventually take over the construction.

Representing the President later at the rally, the Ministry of Tourism, Wildlife and national Antiquities Professor Ephraim Kamuntu, handed over the cheques, worth Sh3.155b to the leaders representing beneficiary communities neighbouring Mt Rwenzori national parks and Queen Elizabeth National parks.

Kamuntu said the money was 20% from the revenues that UWA collects from tourists at the gates of the national parks.

Extend fence, leaders implore
However, several leaders, including Agrrey Natuhamya, the Kamwenge district chairman, lauded President Museveni for fulfilling his promise but implored the government to extend the electric fence to there areas.

"This year alone, elephants have killed four people in my district," Nahamya said.

Destruction
The UWA Executive Director, Sam Mwandha, revealed that wildlife animal-human conflicts had increased by 22% since 2009, with Queen Elizabeth registering more than the 13,000 cases of conflicts during that period.

According to Mwandha, most conflicts were caused by elephants, baboons, and chimpanzees invading the communities. 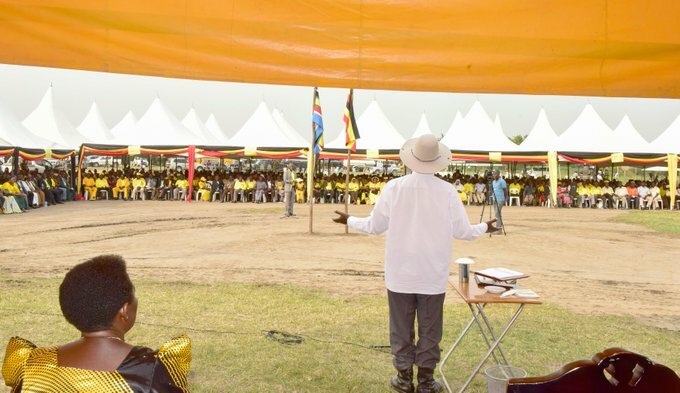 The Uganda Wildlife Act 2017, passed by parliament early this year,  also prescribes life imprisonment or Sh20b fine or both for anyone caught killing endangered species.

The law provides for compensation where a person is killed, suffers bodily injury or suffers damages to his or her crops or livestock, by wild animals listed under the Fourth Schedule of the law.

The law also provides for community participation in wildlife management through community wildlife Committees for each Protected Area.

How the fence works
According to Space for Giants chief technician Abraham Njenga, the fence comprises of wires that connect through treated wooden pillars which are about five feet high and can last for between 30 and 40 years unless tampered with.

"The wires are connected to constant solar-generated electricity and fitted with live spikes that protrude either side of the mainline," he says

He says whenever an animal approaches; the electric power will emit a repulsing current and thus scare the approaching anima away.

He also said provisions have been made to secure places crossed by human such as roads and bridges to protect them against shocks.

Attached to the solar unit is a siren which goes off when power reduces or when there is interference along the electric fence.

Local people speak out
The commissioning of the fence brings relief to the thousands of communities that have suffered decades of invasions by wild animals from the national parks.

Residents around the parks have also been losing huge chunks of there farms to elephants and, in some cases, there lives or arrests during clashes with game rangers while poaching.

According to Schola Ntaama, a Rubirizi resident, domestic violence was on the increase as men spent nights away from there homes camping by the edges of the park to protect their gardens from the invading elephants from the park.

Jamila loved God and people around her

Mum is gone but her love lives on

She mothered me into a lady