Gen. Sejusa missing on list of retiring ge...
Next Story

Dr. Stella Nyanzi left flanked by the prison warden on arrival at High Court for the interpretation of the Buganda Road Magistrate ruling over her cyber case at High Court on July 29 2019. (Photo by Wilfred Sanya)

The High Court in Kampala has set July 31 to rule on whether it calls for and examines the record of the afore said proceedings of the Buganda Road Chief Magistrate Court in Dr. Stella Nyanzi cyber harassment and offensive communication case against President Yoweri Kaguta Museveni.

Nyanzi, a former Makerere University research fellow, who has been on remand since November last year petitioned the Criminal Division of the high court on grounds over what she termed as bias and impugned proceedings of her case by the lower court trial Magistrate Gladys Kamasanyu.

Nyanzi and her lawyers Julius Galisonga, Isaac Ssemakadde, John Isabirye, and Gerald Owiny accused the lower court of acting illegally when it failed or refused to facilitate the compulsory attendance of witnesses that the accused had consciously decided to call. 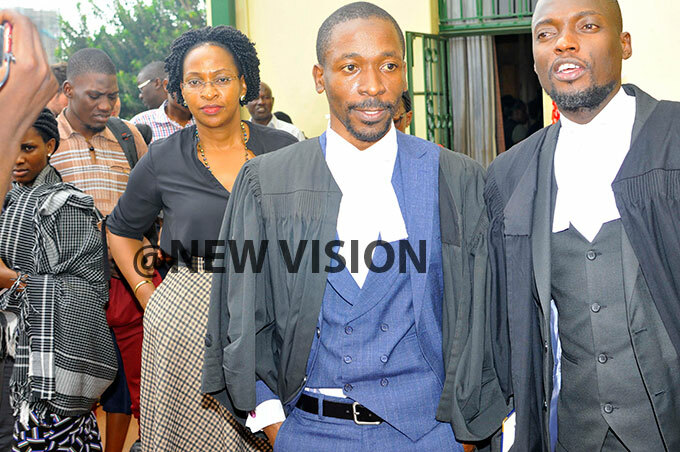 Isaac Semakadde and Julius Galisonga lawyers of Dr. Stella Nyanzi during the hearing of her case at High Court. (Photo by Wilfred Sanya)

"We also call this court's attention to remit the matter with directions that the accused case be heard by another magistrate who shall make such orders as certified by the High Court.

We, therefore, pray that you alter or reverse the impugned findings and orders," Galisonga requested court.

However, the state prosecutors Janat Kitimbo and Timothy Amerit told the court that the defence failed to demonstrate sufficient summons to the witnesses and added that it was wrong to blame that on the trial court.

The prosecution also added that the defense's application aimed at frustrating the pending judgment that had been scheduled on August 1, 2019 and the accused's stay in prison was by her choice but not prosecution.

"My Lord, Nyanzi's stay in prison should also not be blamed on prosecution but it is on her evolution since she has never at any time requested for bail," Amerit told court.

This prompted the trial judge, Lady Justice Frances Abodo to adjourn the matter to July 31, 2019, for ruling.

"I will deliver the ruling regarding this matter on July 31," Abodo said as she adjourned the case. A cross-section of people who had come to hear Dr. Stella Nyanzi's cyber case.(Photo by Wilfred Sanya)

The prosecution alleges that on September 16, 2018, Nyanzi posted on her Facebook page indecent words against the president and his late mother Esteeri Kokundeka.

According to the state, the said posts were intended to disturb their peace and right to privacy.

On April 10, 2017, Nyanzi was also charged in the same court with the same offenses but her trial neve

Stella Nyanzi lines up 20 witnesses to defend herself

Can democracy and dev't be achieved without presidential term limits?

Can democracy and development be achieved without presidential term limits?