Zari and I had a good time - Platnumz
Next Story

President Yoweri Museveni on Thursday afternoon received and welcomed reigning Miss World, Vanessa Ponce, and also doubles as Miss Mexico who called on him at his country home in Rwakitura in Kiruhuura district.

Miss Vanessa Ponce who is the 68th Miss World since the global pageant began, is in Uganda for a six-day visit at the invitation of reigning Miss Uganda Quinn Abenakyo, who is also Miss World Africa.

President Museveni welcomed Miss Vanessa Ponce who was accompanied by her host Quinn Abenekyo to the country and congratulated her upon her achievement having been crowned Miss World last December. He expressed happiness that the Miss World pageant was being used to promote tourism globally adding that when you talk of tourism in Uganda you are on the right destination in the world because of Uganda's unique climate and tourism potential.

"Uganda is one of the few unique places in the world that lie on the Equator but because of its high altitude, it also has part of the country covered with snow," he said.

The President told Miss World that tourism has a great potential to benefit many people in the world if the sector's potential is fully utilised especially in Uganda. He appealed to both Miss World and Miss Uganda to popularise the tourism potential of Uganda. He lauded the hospitality of the people of Ugandan and extended an invitation to Miss World to come back to Uganda and enjoy the country's tourism and hospitality.

Miss World Vanessa Ponce described the African continent and Uganda in particular as exceptionally beautiful but wondered that people, especially in her native Mexico, are not aware of this unbelievable beauty. She told the President that on top of promoting tourism, the Miss World pageant was used to support charity work especially on the plight of women and children. 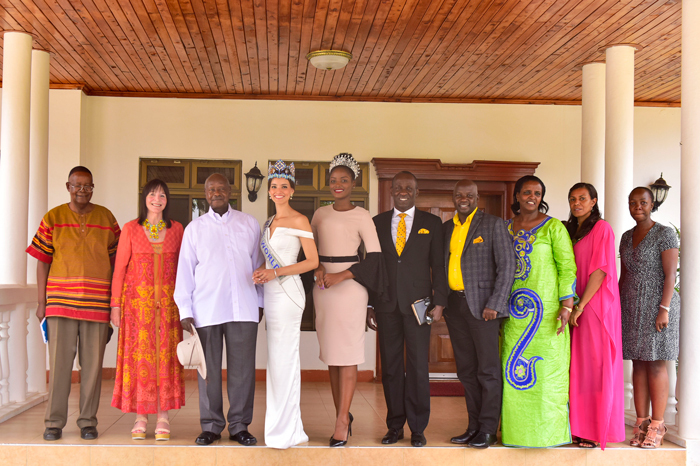 She added that she is in Uganda to support Miss Uganda, Quinn Abenakyo, who has initiated several projects in the country aimed at the promotion of the education of the girl child and the betterment of women.