Shida Leni is in the form of her life. File Photo

Is Shida Leni about to break the national 400m record for the sixth time?

With the National Track and Field Championships on Friday and Saturday, Leni could be the major attraction in the women's sprints at Namboole.

Fresh from winning silver at the recent World Universiade in Napoli, Italy, national 400m record holder Leni is most likely the woman to set the championship alight.

Leni's imperious form at the Universiade saw her narrowly miss out on gold when she clocked 51.64 seconds, behind Paula Errejon of Mexico who took gold in 51.52.

The Police Athletics Club runner, coached by Kevin O'Connor, has been in blistering form since 2018 during a spell that has seen her break the national record five times.

By Monday next week, her current record of 51.55 seconds could be reading different figures; making it the sixth time she is rewriting the record.

"There have been many reasons for her improvement (track sessions, hill training, swimming etc.), not to mention her impressive dedication and determination.

"But another important reason has been weight-training at the Espace Gym, Silver Springs Hotel. Despite her tall and slender frame, she is immensely strong, and this strength and power have been converted into speed," her coach O'Connor was recently quoted as saying about Leni's performances.

Leni's compatriot at the Universiade, Ajok who won 800m bronze, is not entered for the IAAF sanctioned championship.

In Ajok's absence, the 800m and 1500m battles will largely be a showdown between perennial rivals, but close friends off the track, Winnie Nanyondo and Halima Nakayi.

into third place last year at the Gold Coast games, as the main challenger alongside Juliet Chekwel who finished seventh. In a battling race at the Gold Coast, Chesang beat off a stiff challenge by Kenyan Stacy Ndiwa to clock 31:45.30 for gold. 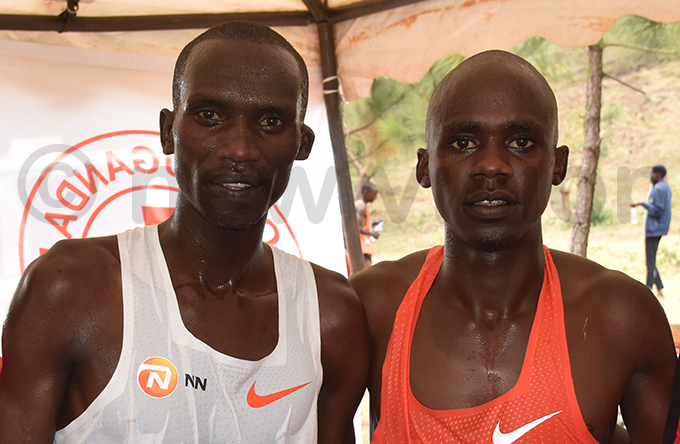 Joshua Cheptegei (left) and Jacob Kiplimo are set to renew rivalries on the track. Photo by Richard Sanya

But the race of the day is anticipated to be the men's 5000m or 10000m which will throw up a duel between World Cross Country champion Joshua Cheptegei and Jacob Kiplimo. Since the beginning of this year, Kiplimo has twice inflicted defeat on Cheptegei.

It all started at the National Cross Country Championship in Tororo last February. With two laps to go, the pair pulled away from the rest of the pack but it was Kiplimo who had that extra energy to beat his senior colleague and come home in 28:57. Cheptegei came in 11 seconds later.

A few weeks earlier, Kiplimo had taken a commanding victory over Cheptegei at the Cross Internacional de Itálica in Santiponce, near the Spanish city of Seville in the sixth leg of this season IAAF Cross Country Permit series. Kiplimo's impressive road performance on the day saw him clock 26:41 in the 9.9km event.

The two runners were to come face-to-face again at the IAAF World Cross Country on March 30. Cheptegei could not afford another beating by Kiplimo.

The world-beater in Cheptegei was at the forefront as he won the men's senior race in 31:40 minutes, beating Kiplimo by four seconds for a Uganda 1-2 which pushed Kenya's Geoffrey Kamworor into third place.

Defiler jailed for one month