Bundibugyo hit by floods
Next Story

The group was reportedly headed to the Ministry of Gender, Labour and Social Development to protest the labour export regulations.

Doreen Kaija,Aisha Mbabazi(Left) and Edith Nabatanzi (with a blue chart) moving to the Ministry of labour during their protest against labour exportation. (Photo by Peter Simon Tumwine)

The group was reportedly headed to the Ministry of Gender, Labour and Social Development to protest the labour export regulations.

LABOUR   PROTEST
KAMPALA-Police have confirmed the arrest of three members of Uganda Young Democrats (UYD) for allegedly holding an illegal protest in the city.
The group which held a press conference at their offices in Kampala to denounce the labour export laws as weak on Friday later took to the streets of Kampala to demonstrate their dissatisfaction and to demand action from the authorities.
However, according to  Kampala Metropolitan Police spokesperson Patrick Onyango, the young Democrats matched on the streets without police clearance contravening the rules.
The group was reportedly headed to the Ministry of Gender, Labour and Social Development to protest the labour export regulations.
The Police mouthpiece added that government was already in the process of addressing their grievances which necessitate not any protest.
Onyango said the suspects will be charged with inciting violence and will be arraigned in the courts of law. 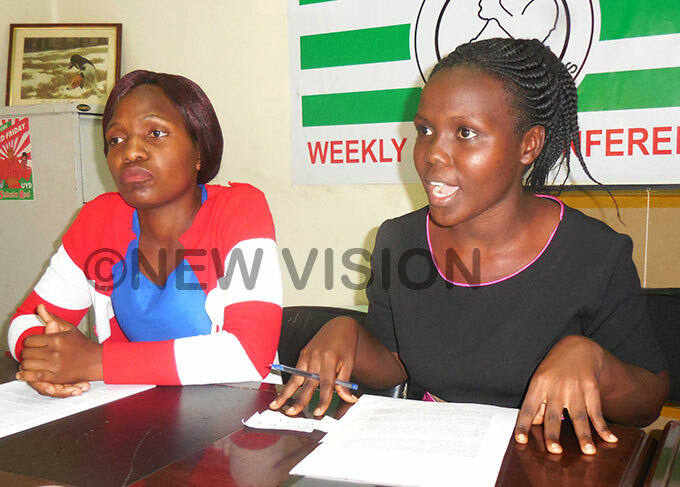 Doreen Kaija UYD women League leader ( in black) and Edith Nabatanzi Women leader Makindye( in Red) before being arrested by police. (Photo by Peter Simon Tumwine )
However, there are conflicting statements from the Minister of State for Gender and Culture Peace Mutuzo and Onyango. There are over 40,000 Ugandans working in Oman", Mutuzo added. Onyango also mentioned that there are 38,000 people.
On Thursday, Mutuzo told legislators that the proposed ban won't be the solution to the challenges brought by labour exportation. Instead, it would expose more Ugandans to trafficking, she said.
The Minister said that the programme of labour externalization was not introduced to encourage Ugandans to go abroad but rather to establish an alternative to trafficking for Ugandans who out of their will opt to leave the country in pursuit of employment abroad.
"The government took cognizance of risks associated with individuals being placed abroad by traffickers. However, the government was also aware that people cannot be forcibly stopped from seeking work abroad." The minister told the House.
Citing Article 29(2) (b) of the constitution of Uganda, She said every Ugandan enjoys a right to enter, leave and return to Uganda.
Betty Nambooze Mukono Municipality, Member of Parliament called for the suspension of labour export as government finds solutions to the increasing torture meted on the Ugandans working as maids in homes in the Middle East.
"With the continued growth rate of unemployment in our country, many youths have found themselves in situations that are hard to cope with and therefore rendering them to the demanding community", said Doreen Kaijja, Woman leader Uganda Young Democrats.
According to Kaija, young girls are left with no option but to emigrate to the UAE countries in search of opportunities and unfortunately, those that migrate have found themselves victims of various types of abuses and torture notwithstanding the exploitative abuses.
"These girls are lied to by the agencies that they are going to do housework and they end up being killed after some period and their internal organs are taken." She noted.
"There are only two embassies in these five Arab countries of which the government is not making the memorandum of understanding towards safeguarding our blood",  Kaij added. The agencies collect between 2.5million shillings to 6million for those who intend to go to the Arab countries for employment.
The Uganda constitution recognizes in article 20 that fundamental rights and freedoms are inherent and not granted by the state.
In particular, Article 29(2) (b) states that every citizen shall have the right to leave and return to Uganda, and (c) every Ugandan has the right to a passport or other travel documents.
"Many of these Ugandans are taken to other countries by agencies that are not licensed", Kaija noted.