Kabuleta insists he was tortured

Watchman Ministries’ pastor, Joseph Kabuleta drives to the Special Investigations Directorate to answer his bond where he was accompanied by his wife, Rebecca Kabuleta on July 18,2019. Photo by Eddie Ssejjoba

KAMPALA - There is no evidence of torture but I'm telling the truth that there was torture, both physical and psychological, said Watchman Ministries' pastor and former scribe, Joseph Kabuleta soon after his bond was extended to Monday.

Kabuleta, driving a silver-grey Mercedes Benz KOMPRESSOR and in the company of his wife Rebecca Kabuleta, arrived at the police's Special Investigations Directorate (SID) a few minutes to 9:00 AM to answer his bond.

He was arrested on Friday last week by detectives from the Special Investigations Division (SID) from Drew &Jacs Restaurant located in Lugogo and put under custody.

In a statement dated July 12 and signed by the police spokesperson, Fred Enanga, Kabuleta was apprehended ‘because of offensive communication against the person of the President'.

"We once again want to caution all those who glorify such communication, particularly through social media, that though it is public space, it is not protected. Therefore, any postings of false fabrications will attract punishment in accordance with the laws," the statement further reads.

He stated that Kabuleta referred to the President, ‘the Fountain of Honor as a Gambler, Thief, and Liar'.

Although he insisted that he was tortured by the police, the SID spokesperson Charles Atwiine refuted the claims saying it is not a policy of the police to torture suspects in order to get information and that all police officers were aware of it.

"The Special Investigations Directorate (SID) is headed by sober and disciplined officers and it can never be true that he (Kabuleta) was tortured with their knowledge as he claims. As far as I'm concerned he was not tortured," he explained.

But Kabuleta said, "I don't know of anybody whom they (police) have acknowledged to have tortured, even those who had evidence, so you don't expect them to accept that there was torture," he told journalists outside the SID head office in Kireka.

He was received back by a group of zealous friends and followers who shouted praises for the Lord and continued to condemn the police, saying ‘the man of God' was innocent. 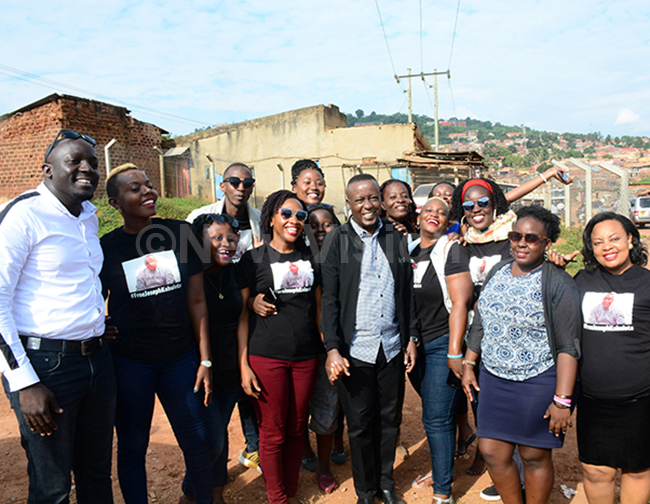 Watchman Ministries' pastor, Joseph Kabuleta (middle) posing for a photograph with fans and members of his Church at Kireka after reporting to the Special Investigations Directorate to answer his bond.July 18,2019. Photo by Eddie Ssejjoba

"I want this thing to be resolved, but it is not up to me, I have been charged with a misdemeanor and the Director of Public Prosecutions (DPP) might choose to lose interest in the case, which will save me a lot of time or they might choose to proceed with the case, either way, my lawyers are ready", he said.

He said when he reports back on Monday, he will come with his lawyers ready to proceed to court if the DPP sanctions his file.

"I don't have evidence of torture, they don't do it the way you can have evidence, but I have told my story".

"If somebody makes you go two nights without sleep, standing all the time, you will not come out and say oh my legs are paining as evidence but that is actually torture," he explained.

According to Kabuleta, security personnel at Kireka hand-cuffed him through the night and forced him to stand from dusk to dawn for two and half nights.

He said some times he was blindfolded and driven to places he does not know where he spent nights with cuffs on his hands and fitters on his feet as if he was ‘a serial killer'.

He expressed displeasure of being pressed in the same cell with hardcore criminals for a mere post on Facebook.

"It is torture if you lock me in the same cells with violent offenders, some of whom are murderers yet I made a Facebook post because I don't belong to that company," he stated.

Asked whether he would file a complaint of torture against the police, Kabuleta said, "I can lodge a complaint and I have sufficient evidence but I will consult my lawyers to see whether it is worth pursuing, otherwise, I'm continuing with my life and nothing changes", he told journalists.

However, it remains unclear whether he will continue using his social media
page, "Kabuleta's Weekly Rant"