Senegal, Algeria set for rematch in Africa...
Next Story

The UPDF officers under the UN Guard Unit 5 (UNGU) received the military UN Medal for Special Service from the UN’s envoy to Somalia, James Swan at a colorful ceremony in Mogadishu yesterday.

The UPDF officers who were awarded posing for a picture. Photos/Courtesy

The UPDF officers under the UN Guard Unit 5 (UNGU) received the military UN Medal for Special Service from the UN’s envoy to Somalia, James Swan at a colorful ceremony in Mogadishu yesterday.

The UPDF officers under the UN Guard Unit 5 (UNGU) received the military UN Medal for Special Service from the UN's envoy to Somalia, James Swan at a colorful ceremony in Mogadishu yesterday.

UN Medal for Special Service is conferred to military and police who have served the UN with distinction.

Swan who doubles as the Special Representative of the UN Secretary-General (SRSG) for Somalia described the event as an indication for, "the excellent work you have been doing since the day you arrived in Somalia has not gone unnoticed. I congratulate all of you for making the grade in a very challenging security environment."

Swan lauded the collaboration existing between the UN security teams and the African Union Mission in Somalia (AMISOM) personnel in Mogadishu, adding that the close working relations had contributed immensely to improving security in Somalia. "Without AMISOM's work and sacrifices, there wouldn't be progress to talk about in Somalia," said Swan.

The AMISOM is made of troops from Burundi, Djibouti, Kenya, Ethiopia, and Uganda which contributes the largest chunk of the peacekeepers.

Deployed in 2007 to support Somalia's forces in the battle against the Al-Shabaab militants, the AMISOM is the longest operation.

AMISOM is also mandated to support transitional government structures, train the Somali security forces and assist in creating a secure environment for the delivery of humanitarian aid.

AMISOM Deputy Force Commander, Maj. Gen. James Lakara, congratulated the contingent for delivering on their tasks despite the challenges they faced.

"This contingent has delivered on its tasks and I take this opportunity to congratulate members of UNGU 5 for a job well done," said Lakara.

His remarks were echoed by the Commander of Sector One Administration Contingent, Colonel Elvis Byamukama, who thanked the soldiers for meeting the UN expectations and urged them to continue upholding professionalism in their new assignments back home. 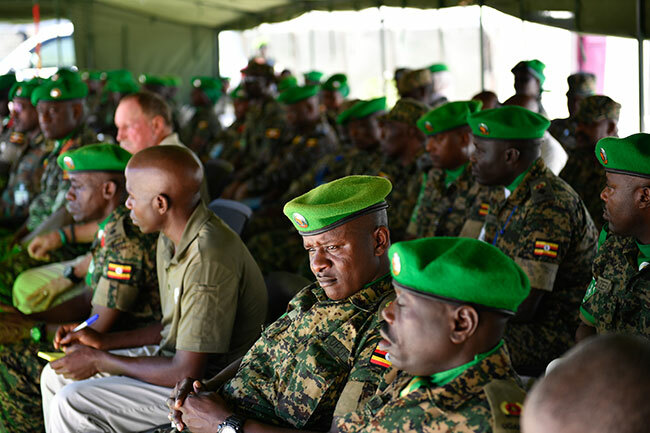 Relatedly,  a total of 1828 officers and men in uniform comprising of Uganda Battle Group (UGABAG) XXVIII and UNGU 6 on Tuesday had a formal send-off for a peacekeeping mission in Somalia, marking the end of the tour for UNGU 5.

UGABAG XXVIII, the 28th contingent to be sent to Somalia will be commanded by Col. Wilberforce Sserunkuuma while UNGU VI, the sixth UN guard unit, will be under Lt. Col. Nathan Bainomugisha.

The AMISOM supported by the UN has been at the center of holding the war-ravaged horn of Africa together and restoring a semblance of peace but the al-Qaeda-linked al-Shabab occasionally attacks and kills people.