Museveni in Nairobi for Source 21 COMESA s...
Next Story

39 witnesses testify in defense of Ongwen at ICC

39 witnesses have given their testimonies in the defence of Dominic Ongwen in the International Criminal Court (ICC) that he did not lead attacks on four internal displaced people (IDP) camps in Northern Uganda.

Ongwen is facing 70 counts of war crimes and crimes against humanity at the ICC for his role as the commander of the Sinia Brigade of Lord's Resistance Army (LRA) rebel group from 2002 to 2005, led by fugitive Joseph Kony.

He is alleged to have commanded the LRA attack on Lukodi, Abok, Odek, and Pajule IDP camps.

Ongwen is the first commanders of LRA accused before The Hague-based ICC to face the very same charges of which he is also a victim.

Among other commanders that ICC has active arrest warrants are Kony and Vincent Otii. Rasta Lukwiya and Okot Odhiambo had their arrest warrants dropped as they were reportedly killed.

However, Ongwen has denied the charges, insisting it was the LRA, not him, who carried out the atrocities for which he is being tried.

Ongwen appointed Krispus Ayena Odongo as his lead defence counsel where they are supposed to take 72 defence witnesses to testify in defence of Ongwen. 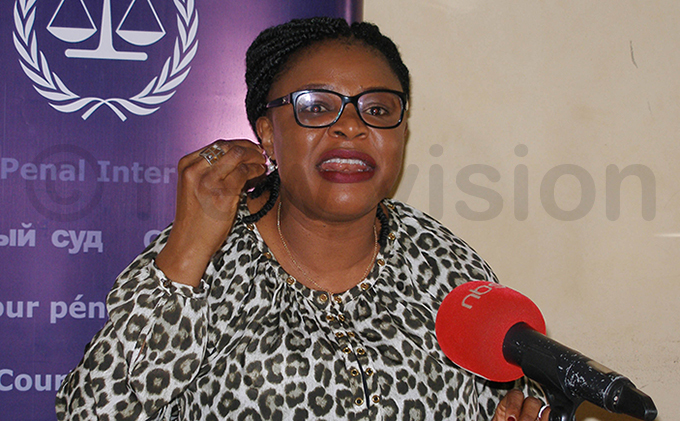 Maria Kamara Mabiny, the ICC outreach officer for Uganda and Kenya said while speaking to journalists in Gulu at Northern Uganda Media Club, said that by July 15, 2019, 39 defence witnesses had testified in court in the defence of Ongwen out of the 72.

"Other defence witness will testify in court next month as the court has been adjourned to August 14 as judiciaries are in recess," she noted.

She said they endeavour that at the end of his trial day, they put together the summary of the proceedings and share them with the victims and affected people in Northern Uganda using live screening equipment so that they are updated.

"We want to update the victims and affected people on the developments that have taken place in a given period in the courtroom," Karama remarked.

She said that on July 17 the ICC will are commemorating the International Criminal Justice Day to draw the attention of the world to be able to fight against serious crimes against humanity and reparation to victims.

"During the commemoration day, we give an opportunity to victims and affected persons in the community to speak for themselves to present their concerns and views on what is bothering them about the court process so that they are recognised and their voices are heard in the courtroom," she added.

"We are also receiving the concerns of victims and affected people in the community using our SMS platform we created for those in the villages so that we get their views and present them to the ICC," Kamara remarked.

Kamara said over 4,000 victims of atrocities allegedly commanded by Dominic Ongwen are being represented by two different teams of lawyers at the ICC.

Sing stars as Nile pool tips off in Nakawa