Residents who lost their land waiting for the judge at High Court in Mubende. Photo by Juliet Kasirye

Comic scenes engulfed Mubende High Court yesterday after the residential judge Joseph Murangira did not turn up in court, to preside over a case, where more than 3,000 people were evicted from five villages in Mubende district.

It is purported that on or around Independence Day anniversary last year, George Kaweesi with the help of security personnel evicted the people from five villages of Kambuye, Kikono, Kyabaana, Kanseera and Lwensanga.

After waiting for the judge, who was in his chamber for close to an hour, his bodyguard identified as Asingwire emerged in court and informed the lawyers and hundreds of people who had turned up for the hearing of the case, that they should leave.

Pressed by lawyer Eron Kizza to explain why there is no court sitting, the Police officer said the judge told him that the applicants, who were remanded in Prison, were not arraigned in court and that the state attorney was absent.

"The judge told me that this court will not proceed because the suspects who are the owners of the case are on remand and that you will be notified of the next hearing date," Asingwire said. 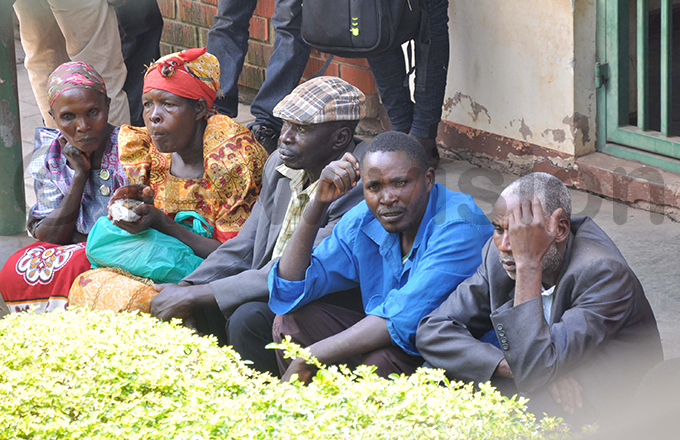 Residents outside the High Court in Mubende while waiting for the judge. Photo by Juliet Kasirye

A furious Kizza hit back at him, saying, "Do you know this is a civil case. What do you mean that the state attorney is not present?" The Police officer returned to the chambers in silence.

Kizza and other lawyers then addressed the gathering on the status of the case before storming the chamber of the registrar and Justice Murangira to find out the next hearing date.

Joined by a legal team from Network for Public Interest Lawyers (NETPIL), lawyer Nicholas Opio and Mubende town MP Tony Ssemmuli, Kizza stormed the registrar's chamber, who after seeing them went to his car and left.

Then the lawyers went to Murangira's chamber but the Judge's bodyguard denied them access and said the judge said they should get the hearing date from the Chief Justice, Bart Katureebe.

This comes four days after the Chief Justice directed Murangira to defend himself against allegations that he is siding with one of the parties in the land case.

"I have received a complaint in which adverse allegations have been made against you. Please give me your response on the allegations against you as to enable me respond to the complaints," Katureebe ordered. 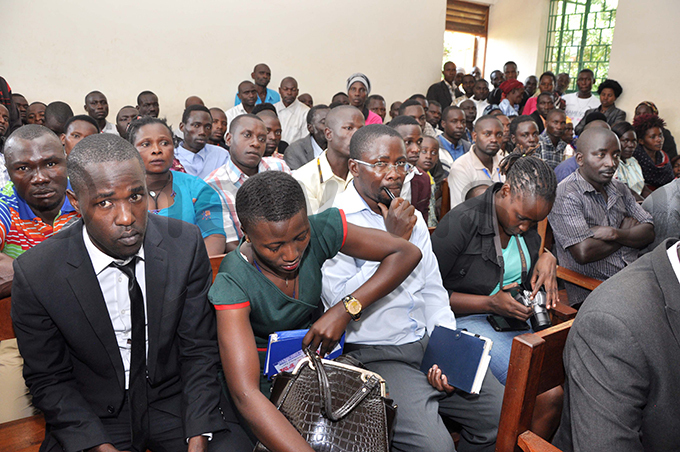 Lawyer Kizza informed the gathering that on July 2, they applied for a production warrant before Justice Murangira, to have the accused produced in court for the matter in vain.

"This letter was not signed despite being received and forwarded to the judge and yet the accused have spent a long time on remand," he asserts.

Kizza also told the gathering that on July 4, he requested the judge to disqualify himself from the case over bias. 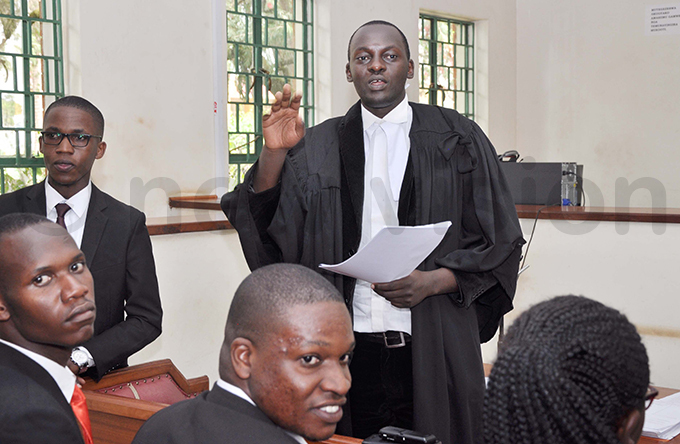 Lawyer Eron Kiiza speaks to the residents after the judge's no-show. Photo by Juliet Kasirye

The lawyer revealed that officers from the Judicial Service Commission (JSC) visited Prisons where some of the complainants were remanded as investigations into Murangira's conduct continue.

Last week, Kiiza & Mugisha Advocates petitioned the Chief Justice stating that their clients were facing criminal prosecution for resisting the illegal eviction and that there are a series of complaints against Justice Murangira for allegedly siding with the tormentors of their clients.

They further alleged that Justice Murangira on July 2 adopted a strange procedure that compels victims of the land grabbing to file submissions before completion of the pleadings.